The view from Bear Pass on the Mirror Lake Scenic Byway.

I spent a week at my Kamas, Utah camp and while I was there I drove two Scenic Byways, the first was the Alpine Loop which starts at Highway 189 and climbs up SR 92 by Robert Redford’s Sundance Ski Lodge and then I took Forest Road 114  to make it a loop that comes out at the town of Midway. The other one is Highway 150 which runs from Kamas, high up into the Uinta Mountains and then comes out at Evanston, Wyoming. First we’ll look at the Alpine Loop drive. 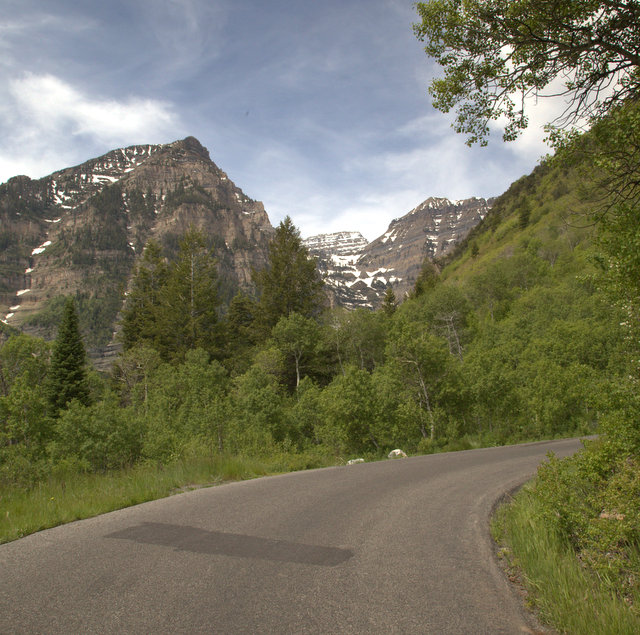 Alpine Loop to FR 114
Like many drives in the area it starts at the Salt Lake Valley in the city of Provo. You take 189 and follow the Provo River through a beautiful canyon towards Heber City in the Heber Valley.  Half way through the canyon you come to highway 92 which goes up the mountain and past the Sundance Ski Lodge and climbs steadily up to a ridgeline where it drops down the other side to the American Fork Canyon and the Timpanogos Cave system. That didn’t have much interest to me, and I didn’t want to end up back in the Salt Lake Valley, so I took Forest Road (FR) 114 at the top of the pass and went east back toward the Heber Valley where I had started from.
It’s a very nice drive  but it suffers from the same problem as all the other drives along the Wasatch front Range in that it’s very crowded.  Until you get to the top and enter the National Forest it’s almost all private property which means lots of driveways and homes. Also, you are too close underneath the mountains to get a good view of them through the trees and houses. Once you are on top and on FR 114 it’s not that spectacular, just another drive through the forest. At least there are several designated dispersed campsites along the way–just get a map at the entrance station into the National Forest and it shows all the dispersed campsites.

That’s another knock against this drive, there is a charge just to drive through it. I believe it’s $6 but it’s free with a National Parks pass–since I have one I didn’t pay anything.
All in all I would give it a thumbs down and say skip it–the most interesting thing is the connection to Robert Redford, but it’s not like he’s going to come out and visit with you! If you are just passing through and have nothing better to do then go ahead, just don’t have too high of expectations. 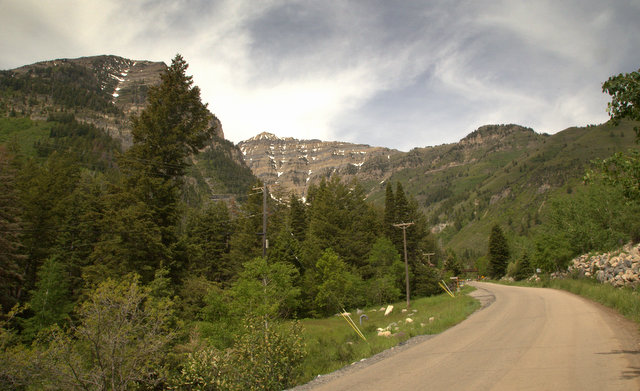 Highway 40, 189 Through the Heber Valley
Oddly enough, I really enjoyed the drive on Interstate 40 from Interstate 80 on it’s way to Heber City. It’s not pretending to be a scenic byway so when you find it as pretty as it is you enjoy it. While the Alpine Loop fails to meet expectations Highway 40 exceeds them. The road runs in a valley between beautiful mountains and also passes Jordannelle Reservoir which is a large, pretty lake. The town of Heber City is a very pleasant little town that is big enough to have nearly everything you could want (and Provo is just over the hill) but small enough to be pleasant and unhurried.
I hope to never live in a town, but if I ever have to, Heber City is one I would include on the list of possibilities. 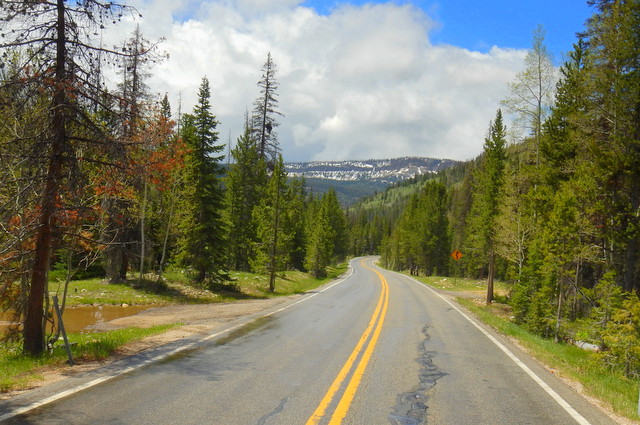 Most of the Mirror Lake Scenic Byway leading up to the pass is wide and beautiful like this and has an abundance of dispersed camping. One of the few times I saw blue skies on either trip! You can see I was headed up into snow country!

Mirror Lake Scenic By way.
After waiting another day or two for better weather I decided I needed to move on so I drove the Mirror Lake Scenic Byway even though the weather was bad. What makes this drive unique is that it is basically the only one through the Uinta mountains and they are unique because they are one of the few Ranges in the country that runs east-west; nearly all the rest run north-south. On this drive I basically headed due east away from the Salt Lake Valley and climbed steadily  toward the high peaks. Most of the way the valley is fairly wide so you get a good view of the mountains on both sides, but best of all you run along the beautiful Provo River as it runs wildly toward the sea. 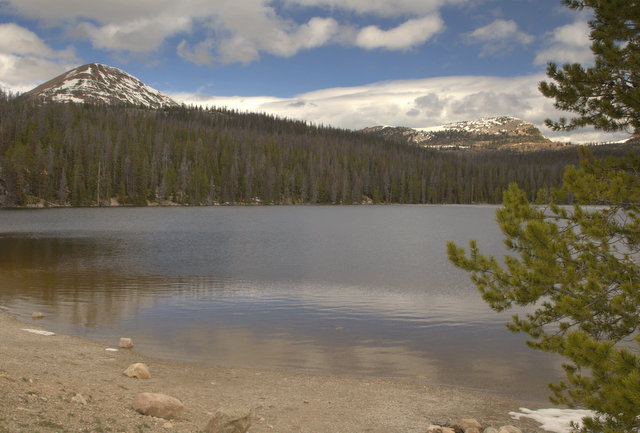 The best thing about the drive is that it has an abundance of dispersed campsites along the way, many of them very close to the river. This area is a playground for the two million people who live along the Salt Lake Valley so even though it is a couple of hours away, it’s still very busy. This part of Utah gets an abundance of snow so it’s heavily used all winter by cross-country skiers, winter backpackers and heavily used by snow machines. In fact when I climbed up into the pass there was so much snow left, even in early June, that there were people out running around in their snow machines. 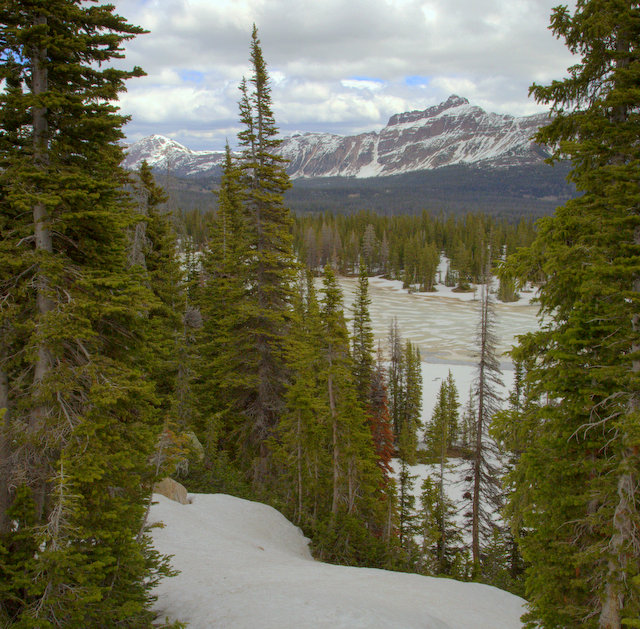 There was still lots of snow up there!

In the summer the area is heavily used for camping, fishing, boating  and most of all backpacking. There are many backpacking trails throughout the high country of the Uinta mountains and it’s not only beautiful country, but it is one of the least used areas in the country. In fact I pulled into a trail-head along the way and there were a couple guys headed out for an overnight backpack even though there was still at least two feet of snow on the ground. I used to do that when I was a young man, not any more! 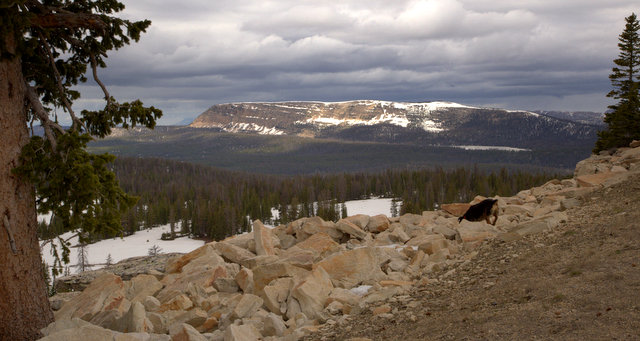 Cody is chasing a squirrel in the rocks. He’s showing his bet side to us!

It’s a very beautiful drive and then you come to the lake country and they are very pretty as well. Since they are stocked there were already fisherman there braving the wind, cold and snow fishing from the shore. Just beyond the lakes you make the final climb up to 10,687 feet at Bald Mountain Pass where you come to the truly stunning beauty of the drive. It’s surrounded by mountain peaks, broad valleys and lakes that combine to form a perfect picture. I really enjoyed the pass even though it was still snowed in and quite cold. I ran around and got some shots and even let Cody out to run around because there was very little traffic up there.

Mirror Lake under a storm.

I drove down the east side of the pass to Mirror Lake and made the turn north toward Evanston, Wyoming. I wasn’t finished with Utah yet so I didn’t drive all the way north, I just turned around and headed back to my camp above Kamas.
I loved this drive! What separates it from all the others is you know that just a few hundred yards from the road is true wilderness where you can go and be all alone in wild nature and face real beauty and real danger. The narrow ribbon of the road is a tiny refuge of “civilization” struggling against the real world.
While these aren’t the best photos I hope you can look beyond the bad light and see the underlying beauty of the area. 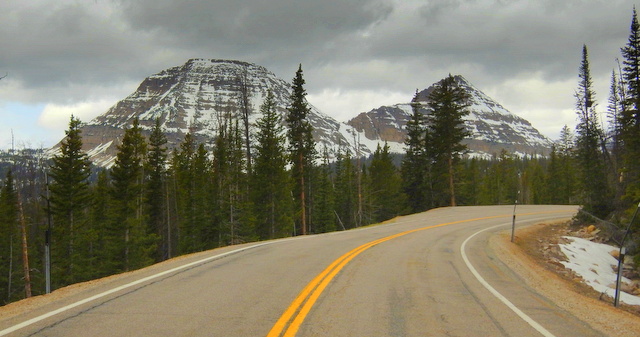 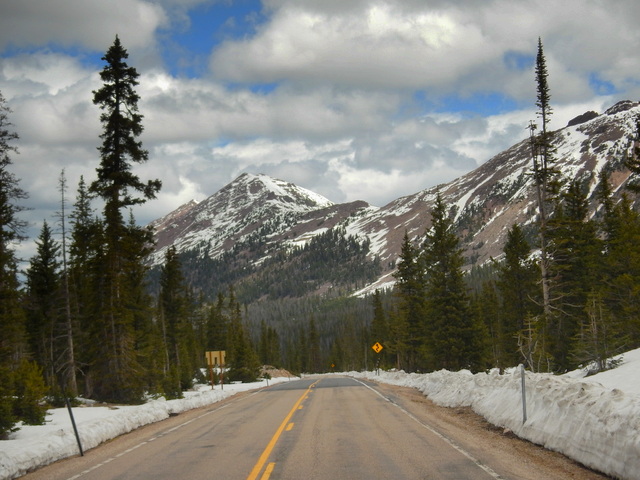 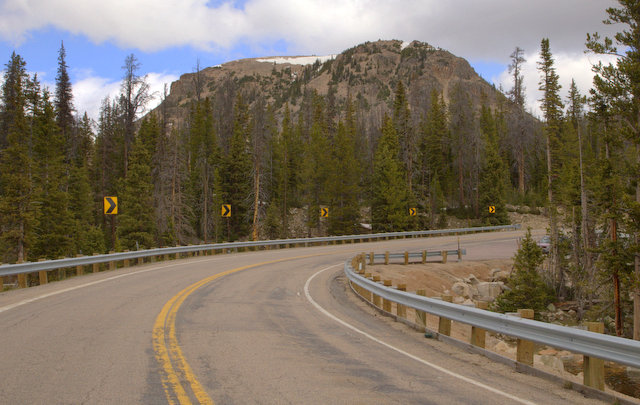