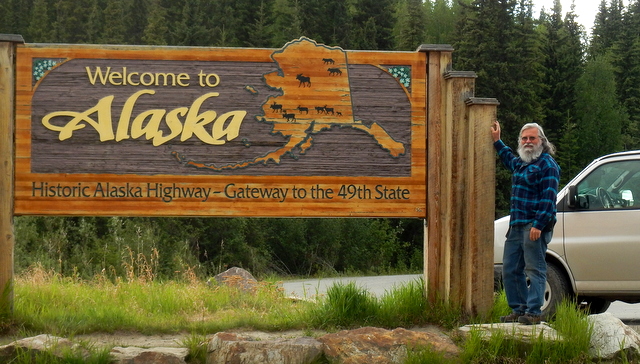 Back Home again! After living here for 45 years, and being gone for the last 6, it felt very good!

We’ve been on the go so I am behind again on posts. I’m going to try to catch up by doing this post on our Alaska campsites. To save some time it will mostly be pictures and the captions will tell most of the tale. This post will be our first campsite and the drive to Anchorage down the Tok Cut-off to Glenallen and then to Anchorage. 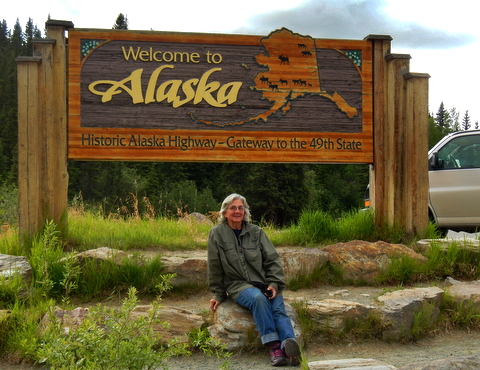 This isn’t Judy’s first rodeo either; she visited for 2 weeks vacation, several years ago. 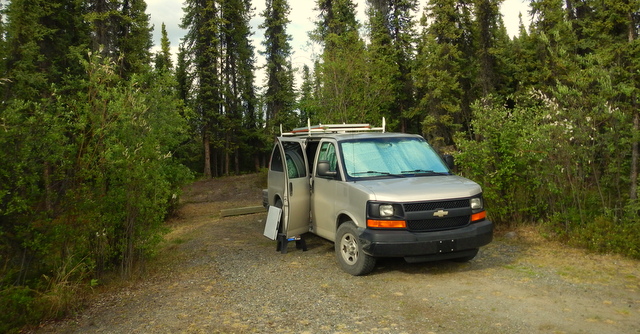 Our free campsite at Deadman’s campground. It was much nicer than the name made it sound!

We drove from Whitehorse, Yukon Territories to a free campground just 18 miles over the border into Alaska. Deadman’s Campground is part of the Tetlin National Wildlife Refuge and sits on a pretty little lake. All the lake-front sites were taken, but we found a nice site for the night. If it’s full there is another free campground just down the road at Milepost 1221.7, it’s also on a lake. 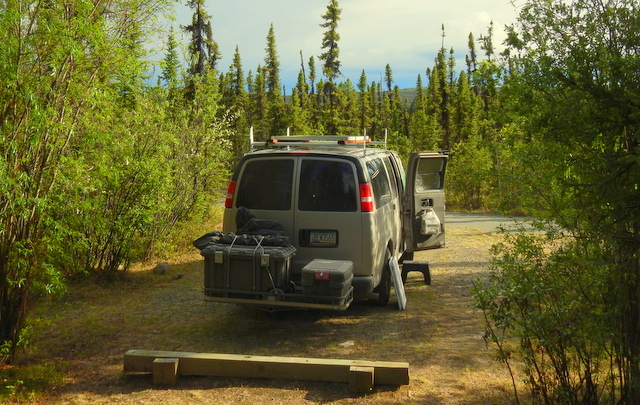 Another shot of the campsite.

We just spent one night there and then continued on toward Anchorage. We drove to Tok Junction on the Alaska highway and then turned south on the Tok Cut-off toward Glennallen and then turned southwest on the Glenn Highway toward Anchorage. This far north the roads are pretty poor. Their worst the 300 miles from Whitehorse to the border; fortunately, once you cross into Alaska, they improve, but still have bad spots. Pay attention to the warning signs! 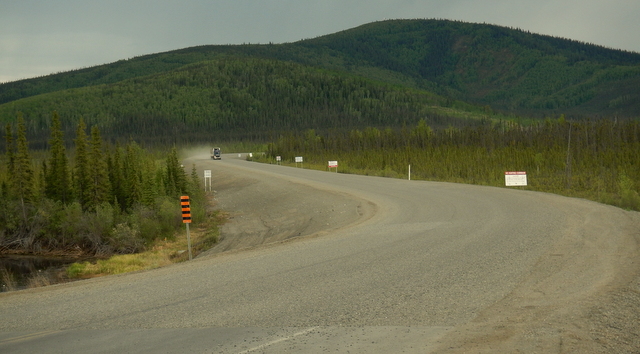 This is the road in Canada just before the border, you can see the truck is kicking up a cloud of dust and gravel. There are very long stretches of gravel between Whitehorse and the border. This is typical terrain in northern Canada, flat with rolling hills.

I had an interesting experience once at Tok. When I was younger I drove a School Bus for  5 years in Anchorage. One winter I took a charter trip to Tok for a small-school Basketball Tournament. Interior Alaska is by far the coldest part of Alaska as I found out on that trip. It was -30 degrees in Anchorage when we left. That’s cold but not uncommon so we didn’t think much of it. But when we got to Tok it was -70 degrees Fahrenheit without any wind. Once there I pulled into a convenience store and let the kids run in  for snacks. As always in that kind of cold, I never shut the engine off of my diesel bus because there wasn’t a chance in Hell it would start again! 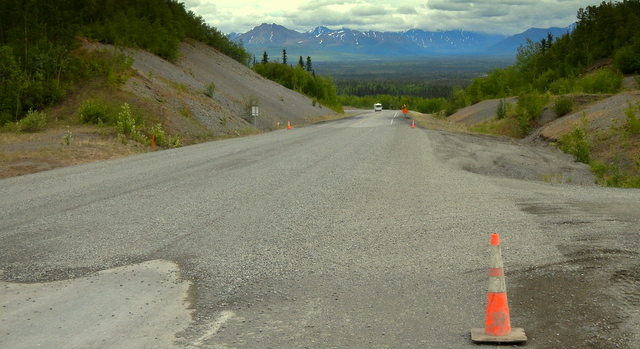 Even in Alaska there are bed stretches of road, but none as bad as in Canada.
The permafrost is very hard on roads.

When the kids were back in the bus and loaded up I put it in Drive, but it wouldn’t go–nothing! I could put it in reverse, but not forward in Drive. I called my boss in Anchorage who arranged to have the kids taken to the High School gym where they were going to sleep and he also arranged a local garage to take the bus in and fix it. But, I could only go in reverse and it was dark–that far north, it’s almost always dark in the winter! Even worse, there was a real thick Ice Fog, which is also standard at those temperatures. When air gets that cold, it can’t hold any moisture so it just freezes as tiny, tiny crystals and hangs in the air: fog made of ice. What to do? They called the State Troopers who sent over a patrol car to be my escort and I backed all the way from the convenience store, to the garage and backed straight from there, down the road, through the Tok Junction and into the garage! Whew!! That was a close one!  It turns out one of the hydraulic hoses was too light duty for that temperature and had frozen and broke. It was a simple fix and we were ready to go.

The Tournament ended Saturday night and we were scheduled to return  Sunday morning. But, it was still -70 and  they wouldn’t let us drive home at those temperatures. If there had been any problem with the bus on the drive back to Anchorage we could have frozen to death before someone found us. This was long before cell-phones and we would drive through hundreds of miles with no humans anywhere. Fortunately, that night the cold snap broke and it warmed all he way up to -35 and they cleared us to go home. Thank god for warm spells!

It’s too early for Fireweed, so I don’t know what these purple flowers are. But there were lots of them and they were very pretty!

The weather was warmer  on this trip for Judy and I in the van, but still not good. We drive through lots of rain and clouds but I took some pictures anyway. I love this drive and think of it as one of the prettiest in Alaska. I tried to get some decent photos but these were the best I could do. I hope you enjoy them. 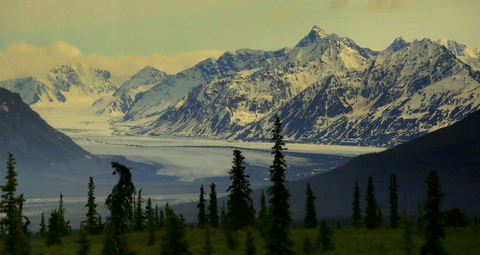 This is a glacier on the drive from Tok Junction to Anchorage. 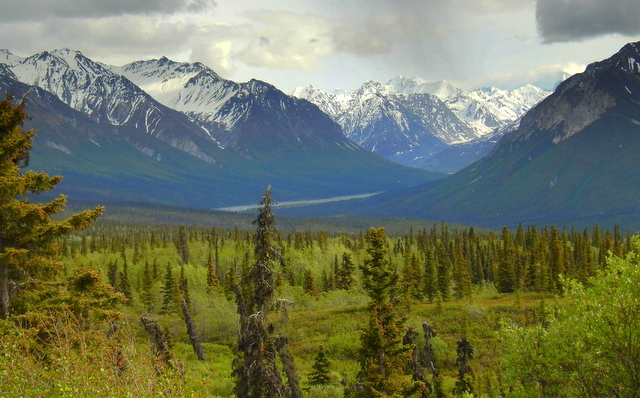 This is the Matanuska Glacier which is 100 miles north of Anchorage. It’s a gorgeous area but I didn’t get any other decent photos from it. 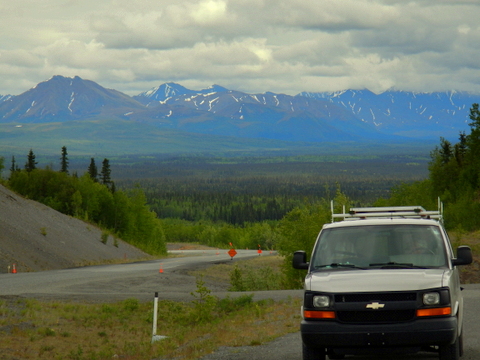 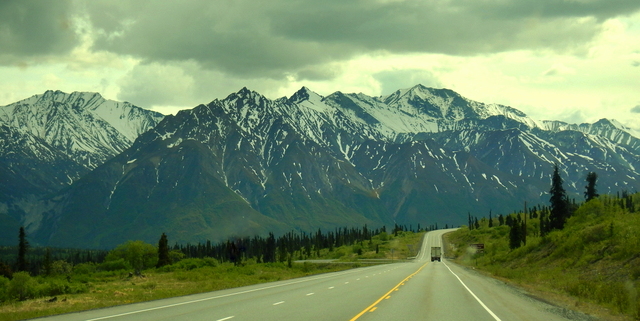 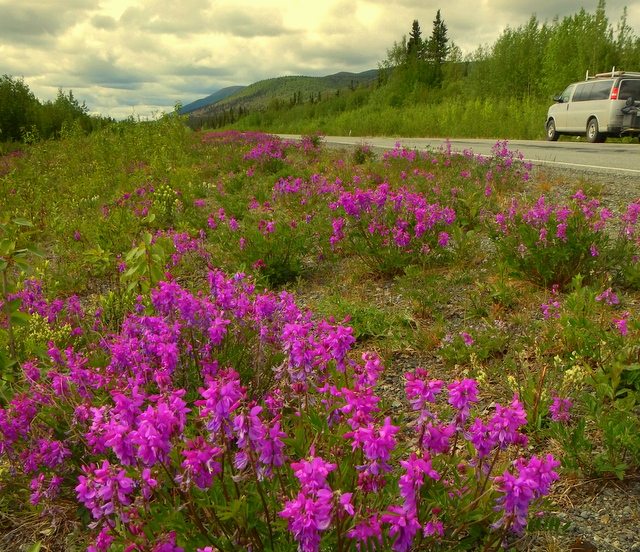