I’m not a normal blogger, because I rarely write about my daily life, so today I am going to correct that. So gather around ladies and gentleman, boys and girls of all ages, step right up to the greatest show on earth: THE LIFE OF BOB!!!!!!! Yeeeeeeaah! And the crowd goes wild! 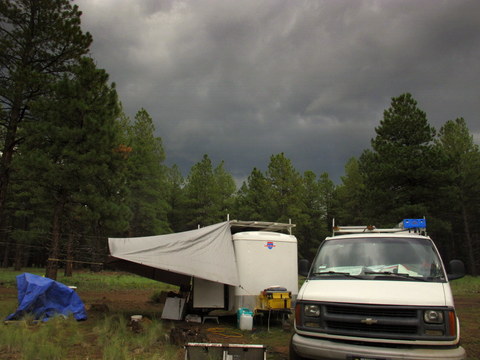 The Monsoons are Here!

Every time you meet someone, you start out with a discussion of the weather, so I am doing the same. “How’s the weather–I’m glad you asked!” I can summarize it in 2 words: IT SUCKS!!” It really does! 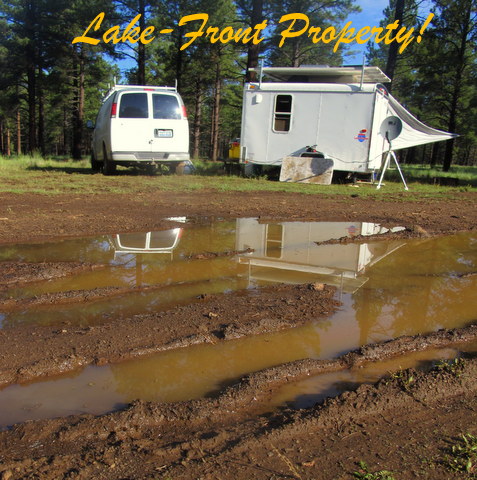 The good thing about all the rain is that now I’m camped on a lake! In the Kaibab NF, you have to camp within 30 feet of the road.

I’m still in the Kaibab NF about 10 miles from Flagstaff. I’d heard about Arizona having a “Monsoon” season but I always thought to myself, “Ah common, it’s Arizona, how bad can it be?” Well, now I know the answer, which is, “It’s unbelievably bad!” It has been raining for about two weeks straight with only an occasional let up. And not just a little drizzle here and there, no, sometimes it is a gully-washer rain, the kind that picks up your car and washes it downstream a few miles. I’m glad to say the forest has handled all the rain well and other than some very large mud-puddles it really hasn’t been a problem. The pictures give you an idea of all the mud, but so far only one person has got stuck and he tried to pull his big Airstream trailer through a field—not a good idea!

I had to deploy my tarp-awning to maintain my sanity! I’m okay being stuck inside as long as I can keep the door open. The tarp let’s me do that in the rain.
Fortunately it isn’t like that all the time, the extremely heavy rains only clobber us a few times a day, then the rest of the time is a light to medium rain. This has been going on for a month and at first we got some sun every morning, but for the last two weeks we rarely saw the sun; not even for a minute! I’m glad to say it has let up and we are back to getting sun every morning again.

My good friend Randy (the King of the Codgers) modeling the latest fashions in mud puddles. That is the main road coming into camp, for some reason driving through the puddles isn’t a problem.
This makes me very glad I have enough solar! I’ve cut back my use of power to the minimum and so the batteries in the trailer have never gotten below 12.4. But I am reminded again why my advice to everyone who asks me how much solar to buy is AS MUCH AS YOU CAN AFFORD. Don’t bother with the calculation and figuring out exactly how many amp-hours you need per day. Prepare for the worst and buy all you can afford!

This is the largest puddle on the road, it’s at least 20 feet wide. No one has gotten stuck in it yet.

The best, thing about the monsoons is that it keeps the temperature at just about a perfect level. Days are in the mid-70s and nights are perfect for sleeping. The rains were late coming so it had got pretty hot here. The mid-90s was the top and we were all concerned we would have to leave and find milder weather. But as soon as the rains hit it cooled right off and is very pleasant. 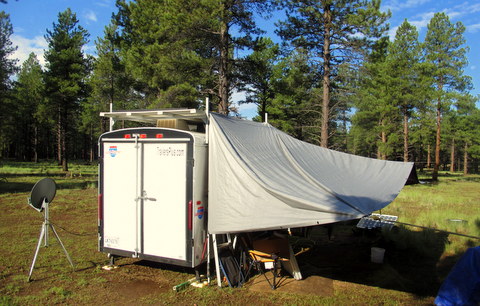 Another view of the tarp-awning.

The worst thing about the monsoons is how much it scares Homer. Poor dog is just terrified by all the thunder and lightning—sometimes it sounds like an explosion that will just tear the whole trailer into pieces! To a small degree he has gotten used to it but as I am writing this the afternoon deluge has hit and he is laying on the bed beside me trembling with fear.

For as long as Homer and I have been together, he has had problems with his joints. He has always walked with a very strange gait that looks odd—people have often commented on his strange walk. But he was such an incredibly healthy dog that I didn’t worry too much. He is also an amazing athlete. When he was young, whenever we were with other dogs, they were always chasing each other around. He was so fast that there was never one that he couldn’t outrun. Not only was he fast, but he could run all-out at top speed for miles on end. Watching him run has always been one of my greatest joys! 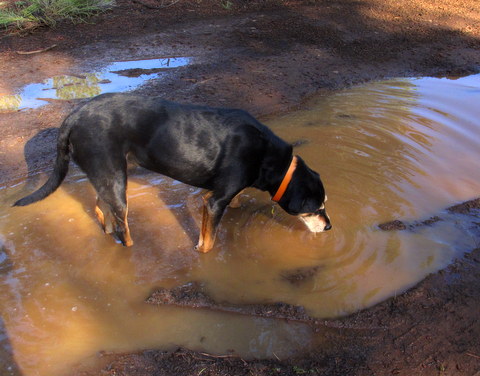 Homer has NEVER met a mud puddle he didn’t love!

He has also struggled with bouts of a strange limp. Just all of a sudden he would start limping—and it was never the same paw, it could be any of them. There was no pattern or rhyme or reason to it. Sometimes it was mild and no one would notice but me, but sometimes it was severe and he could just barely walk. I tried many times to give him Glucosamine Chondroitin, but he simply would not take it.
Homer is almost 10 years old now (which is old for an 80 lb dog). In the last few years he has slowed down tremendously and stays close by when we walk and runs much less. When he gave up chasing rabbits and deer I knew it was time to make some changes. About a year ago I cut back on our walks from 2 hours a day to 1 or 1 ½ per day. That seemed to help. But in the last few months he has gotten much worse. He appears to walk with some difficulty and the limping has increased and gotten worse. A month ago I bought a pill-grinder and started grinding up Glucosamine Chondroitin and putting it into his food. I also grind up and give him a baby aspirin every day. 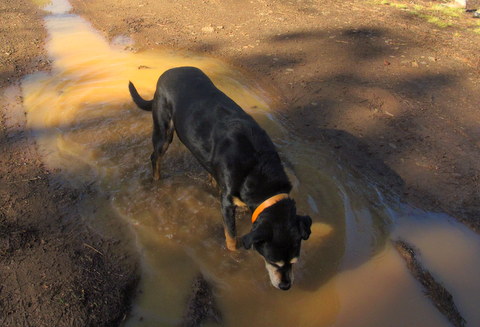 Another advantage of all the rain is I don’t have to go to town as often for water!

Last week he jumped off the bed and sprained his paw and could barely walk. For the very first time since we found each other, he stayed home from a walk. I started taking him out on a short, 10 minute walk together, and then I put him in the trailer, and went for a long walk without him. That has made a big difference and he seems to be doing much better.
That will become a permanent thing from now on. I always knew this day would come, especially this last year as I’ve watched his physical ability decline. Amazingly, he has adapted to staying home remarkably easily. I have always dreaded the day that I had to leave him home. I feared it would be heart-breaking for both of us. And the first few times were sad, but after a few days, he willingly jumps up onto the bed and settles into it. It really does seem like he knows this is best and he feels so much better, he’s actually grateful to be able to stay home. It makes me feel like maybe I have been abusive and negligent to not stop earlier. Maybe he has been miserable on our walks and he just never could let me know? I’m with a lot of other people and we walk together so the walks have gotten longer and longer. I should have cut them short but I was enjoying them too much—sadly, Homer was the one who suffered.
Fortunately, in every other way he seems to be in very good health. He is bright, alert and happy. Other than the walking issues, you would never now he was such an old dog. I’m hoping the extremely wet weather may be making the issues worse and it will get better once we are out of it. But even if it does, he won’t be going for long walks with me anymore. 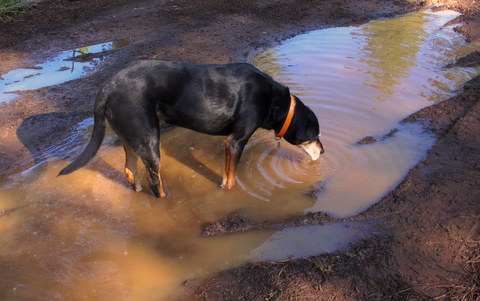