Pizza Party at the Vandwelling Tribe at Cottonwood

Pizza Party at the Vandwelling Tribe at Cottonwood 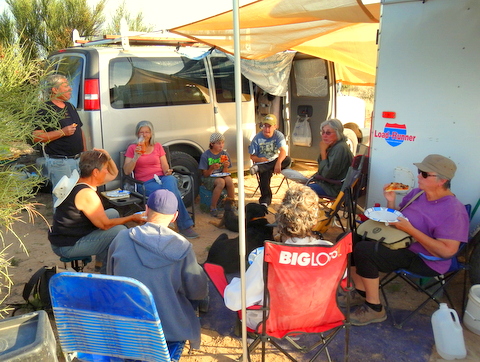 The “tribe” doing what it does best, eating and connecting with like-minded people! Here we’re having a pizza party so we can stay connected.

When I started this website I had two goals:

As time went on I realized there needed to be another goal for my websites and that was creating a Vandwelling Tribe for  vandwellers. While we vandwellers tend to be loners, introverted and almost hermit-like, we also have a need to make a connection with like-minded people. For that we need a very special tribe made up of solitude-loving people who also like to connect with similar folks. I’ve  tried to do that with the Rubber Tramp Rendezvous gathering in January, and it has succeeded beyond my wildest dreams! Every year any of us have gathered together and made new friends and connections with each other and a tribe has emerged. Whenever possible I try to continue that work by opening my camp to all who are willing to join me. Most often its people new to the life who are looking for some initial guidance in following their dreams. 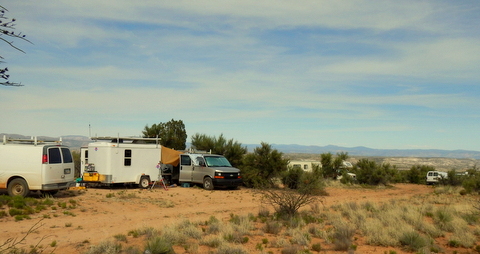 There are 11 members of the tribe in Cottonwood. Five of us are here on the hilltop and the others are in a camp tucked away in the woods..

After the RTR in Quartzsite there has always been a group that stayed with me and this year was no different. About 15 people followed me from Quartzsite to my new camp in Ehrenberg. But what’s different about this year is that they have stayed with me for a longer period of time, in fact right now there are 11 different vandwellers with me even after the move to Cottonwood. I consider that a wonderful thing as it gives them an opportunity to:

For the bold and adventurous that isn’t a necessity, they’ll make a leap of faith and just learn as they go. But for many people it isn’t that simple, they really do need some security during the transition. I also have to say that I have run into a few people who simply were not cut out for this life. for example, I emailed back and forth with one lady for a long time and she finally got out to camp with me and it was just too much for her, she couldn’t deal with it and so after just a week she went back to her old life. I think that is the rare exception–most people who feel the call can do this–but it’s important that we each really give thought to if we are up for this strange new life. Some people are so fearful and averse to new things that they can’t get over the initial shock of how very different the vandwelling life is.
I’m not trying to scare you off, but after that experience I felt it was very important that I start giving more a of a warning to people considering this life, encouraging each of you  to really give thought to your personality and whether you are too timid to do this. It’s something you must decide for yourself.
If you do choose this life, my camp is always open to you and I will do all I can to help you make the transition.

After the pizza party we went for a walk and what stood out to me was that of the 11 people in camp only 3 were men and 7 were women (with one adolescent). It dawned on me that our society discourages women from being independent and so it’s often more difficult for them to step out alone into something this unusual. Creating a tribe and an atmosphere of safety is especially important for them, and something I’m specifically trying to do.

At the Cotttonwood camp we broke up into two camps. Some of them had got here before me and found a camp they liked tucked way in the woods. It was more secluded and sheltered from the winds and a Ranger might not see it. But because it was lower it didn’t have big vistas for views and the internet was not great. They liked that trade-off but I didn’t really want to camp there because internet speed is critical to me and I really love a grand view; so I decided to camp up on a hill that gave me both. So both groups are happy and have just what they need!

We get a big view from our hilltop camp!

What I love about camping with vandwellers is our independence! We can be camped very close to each other, but still totally respect each others needs for “alone” or “me” time.  Once I express my need for privacy it has always been respected and honored! It’s just in the nature of vandwellers to need to be alone and so we respect that in each other. But, even as much as we need our isolation, we also need contact with others. The way we have it set-up we all get both and can establish our own boundaries.
But to keep in touch we need times as a group so yesterday I hosted a pizza party where we all came together and had a good time. As you can see in the pictures there is a very special camaraderie among us and even though we are basically loners, we love being together sometimes.
So come join the tribe, everyone is welcome! 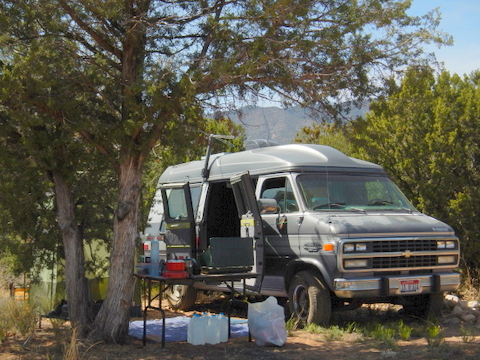 Part of the group is tucked away in the woods which gives them plenty of shade, relief from the wind, and seclusion.

Previous Photos RTR 2015
Next Sometimes You Need a Helping Hand