Proof from the EPA that Vandwelling is Greener than House Dwelling 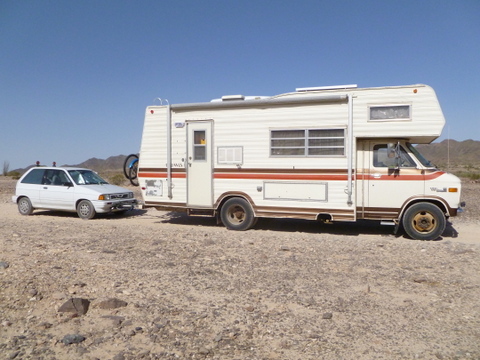 This is a friends very affordable full-time set-up. It’s a 1982 Class C towing a 1998 Ford Festiva. You’d think it was terrible for the environment, but the truth is it’s at least three times better than if he lived in a stick-n-brick house. In this post I’ll prove it to you!

This is going to be my final post about the environment for awhile, I promise! I don’t want to belabor this any more than I have to, but many of you commented that because there are no good solutions to the Climate Change crisis, why was I bothering to write about it at all?  Today’s post is my answer to that; there is a solution and it’s moving into a van! By living in a car, van or RV you can easily cut the amount of  carbon you spew into the atmosphere  (called your carbon footprint) in half or even by two-thirds!! No, you aren’t going to save the world that way, but if enough people do it, we can make a difference.
There are always two predictable reactions to these kinds of posts:

Each of us must live our lives by the light we’ve been given, and for me to know about the environmental devastation that is coming and to do nothing about it would deeply offend my sense of morality. I can’t live with myself if I act that selfishly. Especially since living in a car, van or RV makes my life so very much happier, healthier and content, why wouldn’t I follow my conscience!!

Humans CAN dramatically impact the planets health. It’s time for you and I to take our responsibility for it seriously and reduce our carbon footprint.

Proof from the EPA

To make it easier for us individually to improve our carbon footprint (the total amount of carbon we each put into the atmosphere) the EPA has a calculator that lets you plug in your numbers (in the form of monthly payments for utilities and the MPG and miles driven per year for your vehicle) and they calculate the amount of carbon you leave in the atmosphere. Most importantly it compares your carbon footprint to the National average.
In this post using screenshots from the EPA calculator to compare different vandwelling scenarios to the national average. It’s important to realize that while the tool may not be 100% accurate, that isn’t it’s goal. What it does do very well is compare lifestyle choices we each make and see what the consequences are of our choices. I’ve highlighted the relevant fields in the screen shots, if the text is hard to read, your browser can zoom in, (some browsers use “CNTRL +” to zoom in and “CNTRL -” to zoom out).
Find the calculator at http://www3.epa.gov/carbon-footprint-calculator/

This is basically my life in a 2001 Chevy van traveling about 7000 miles a year and getting 13 MPG. When I lived in a house and worked a job I actually drove more miles because I had a 15 mile one-way commute to work every day and then I took trips on the weekends. Today I don’t have any commute and only travel a few months in the summer. I drive more in the summer, but much less in the winter.
Step 1: How Many Live in Your Household?

Step 2: How Much Carbon do You Burn for Utilities?

My next step is to enter my utilities. You have to tell it what you use for heating and I said propane. You can’t enter zero so although I make all my own electricity from the sun I said I spent $1 on electricity. I believe I average 2 gallons of propane per month for cooking and heat so I said $6 for it. On the right is a running total of my carbon output and the national average.

On the screenshot above you can see the national average for a single person is 7698 pounds of carbon per month for utilities, mine is 482, a massive improvement!  Had I entered Fuel Oil my Carbon savings would have been much higher because it is a dirty fuel. Had I chosen Natural Gas my Carbon savings would have been slightly lower because it is a slightly cleaner fuel.

Finally, you enter your carbon footprint from driving. This is where I get hurt because of my poor MPG. On the right, in the shaded box, is a running total of my carbon footprint compared to the national average–a little more than half! It’s something to be very pleased with!!

Here you can see that my poor MPG really hurts me but even so I’m still nearly half as much as the national average. I’m very pleased with that, especially since living like a nomad actually makes my life far BETTER!

This is a very realistic scenario based on a friend of mine. He and his girlfriend left their old lives and bought a 24 foot, 1982 Chevy Class C and tow a 1998 Ford Festiva. The two together only cost $6000 so most of us can realistically afford it. He’s since put a new engine into the Class C which cost another $4000, but that’s still only $10,000 total. Since there are two of them, the national average carbon footprint goes up dramatically but theirs only goes up a little because they have solar and use a Mr. Buddy for heat. While the Class C gets 7 MPG, they drive it the minimal amount per year and take the Festiva to explore and daily driving. Because it gets 40 MPG on the highway, their average MPG between the two is very high.

The calculator lets you enter the two cars since most American households have two. You can see they prevent a phenomenal amount of carbon from being pumped into the air by living in an old Class C.

This is where you start to see huge savings in your carbon footprint because the average couple lives in much larger homes and burn more utilities and drive two cars more often.  They cut their carbon footprint by a third!! Even if my friend burned double the propane for heat and hot water and doubled the amount they drive, they would still be much less than half of the national average. My friend lives so frugally this is a very realistic guess of his carbon footprint.

Scenario 3: Living in a Mini-van or Dodge Cummins Diesel

Next I want to look at a single person living in a mini-van or Dodge Cummins diesel and averaging around 20 MPG. This is a totally realistic scenario that nearly all of us can accomplish. In fact you can get close to this living in a full-size van. The newer vans easily average 17 MPG and get up to 20 MPG on the highway. If you carry a bicycle or a scooter, nearly any of us can do this good.

By living in a mini-van, your carbon footprint is less than half of the average American single person. 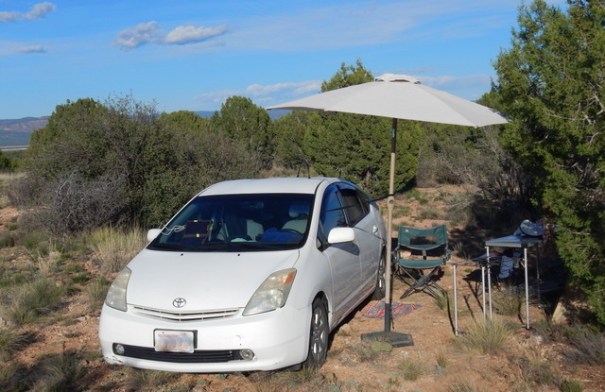 I camped with my very good friend Suanne for two months. She spends very large chunks of the year living out of her Prius, and I can assure you she has a very good life! Getting an average of 45 MPG makes it even better!

Scenario 4: Living in a Prius

For most of us it’s impossible to imagine living in such a small space but there are people who do it! It’s mainly possible because of the very smart design that Toyota did with the Prius giving it much more room than you would expect. It also has the advantage that it’s a huge generator on wheels so you can have climate control while living in it with very little impact on the environment.  I have several friends who live in a Prius and they can leave the air conditioning and the heat on all night and not run their battery down or burn all that much gas. Maybe their MPG will drop from 45 to 40 if they leave the air conditioner or heater on–that’s still pretty darn good!!
As you can guess, a person who lives in a Prius is an Environmental Superstar!

Living in a Prius has the lowest of all the carbon footprints and is about a third of the average for a single person.

Vandwelling: Do it for Yourself, Do it for the Planet

I’m well aware that  very few people would ever consider making such a radical change in their lives just to reduce their carbon footprint, but you don’t have to! If you’re reading my blog, there must be some part of your heart that longs for the simple, free life of a Nomad. The fact that you become an environmental superstar is just icing on the cake!
My goal in this post is to give you one more reason to make the leap.  If you don’t love yourself enough to give yourself your best possible life (and most of us don’t–I didn’t) then do it for your future grandchildren and for the planet–and you’ll get a great life as a side-benefit!

A great book to help you understand your carbon footprint. Get it from Amazon here: How Bad Are Bananas?: The Carbon Footprint of Everything

Get warm water from the sun without any fossil fuel: Viking Solar Camping Shower Bag

Use the sun to do much of your cooking: Sun Oven- The Ultimate Solar Appliance

Previous Prison Break, Part II: How to live in a Car or SUV
Next Proof That Off-Grid Vandwelling is Greener than HouseDwelling