My New Years Resolution: Finding the Happiness of Not Having Things

My New Years Resolution: Finding the Happiness of Not Having Things 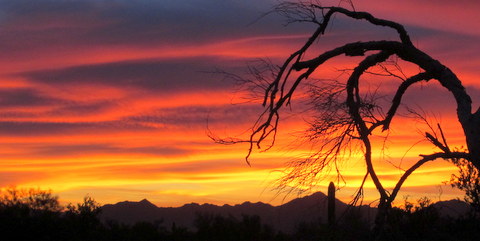 A beautiful sunset is the true happiness of life. What more could we need to be happy?

Frugality is one of the most beautiful and joyful words in the English language, and yet one that we are culturally cut off from understanding and enjoying.  The consumption society has made us feel that happiness lies in having things, and has failed to teach us the happiness of not having things.  ~Elise Boulding

Anthropology is one of my favorite subjects and this week I’ve been reading a book about our Hunter-Gatherer ancestors called “Limited Wants, Unlimited Means.” It discusses at great lengths the latest research into how they lived and it shows they actually lived remarkably pleasant and easy lives.  The thing that stood out to me the most was their relationship to owning things because it is totally different from our own. The entire concept of private property or treasuring things was totally unknown among most of them.
Limited Wants, Unlimited Means: A Reader On Hunter-Gatherer Economics And The Environment

Because they were so mobile, owning things was totally negative. It had to be carried and cared for so owning something had no appeal to it. The very few things they needed could simply be discarded and left behind and new ones made when they got to the new location.
Beyond their need for constant movement, Hunter-Gatherers lived totally communal lives and the idea of withholding things from others in the tribe was unthinkable. If one person had food, everyone ate; if one person went hungry, every person went hungry. Generosity was the single highest value in the tribe and withholding from others was the greatest sin—although there was no concept of sin.

Everything we possess that is not necessary for life or happiness becomes a burden, and scarcely a day passes that we do not add to it.  ~Robert Brault

As I read more about how they lived like things meant nothing to them except a burden, I wished I could have that attitude toward the things in my life. They lived in the happiness of NOT having things. I hate to admit this to you, but I still like my stuff and struggle with constantly wanting “more.” When I lived in a home-built camper, I had so little room that I had very little stuff and was fairly content with that. Then I moved into the 6×10 trailer and I had a LOT more room and the number of things I owned exploded! Then a few years later I sold the truck and bought an extended van and the number of things I owned exploded again! Eventually I become so disgusted with all the crap that I owned and how hard it was to break camp that I went on a major hunt to get rid of a lot of it. That helped a lot and it got better.
But, I’m very aware that possessions still have too much power over me. I have a hunger and yearning to own more and the main reason I don’t is because I can’t afford to get everything I want and I don’t have any room for it. I’d like very much to have a different attitude toward things and that means doing some soul-searching and self-examination. So that’s my New Year’s Resolution for 2014; loosen myself from the tyranny of things and find the joy of NOT having things.
In a recent thread on the forum somebody asked about hiding their valuables in the van or RV so they would stay safe. It was an interesting thread and then Stargazer wrote this post and I was thunderstruck by the wisdom in it:

No matter where you store your valuables, the worry of losing them will always be in your mind and soul. This is a perfect example of how stuff owns the person. The only way to avoid the worry of losing something is not to own it at all, or to spiritually disconnect from it, something most people are unable to do. This is why priests take vows of poverty — not to worship the God of wealth.

Most of us live in constant fear of losing our stuff, why? Because the stuff has way too much meaning to us, if we lose it, we will be emotionally hurt by the loss. That says there is something basically unhealthy in our relationship to it.

I like to walk about among the beautiful things that adorn the world; but private wealth I should decline, or any sort of personal possessions, because they would take away my liberty.  ~George Santayana

My goal for this year is to change my basic attitude toward things so that I can be like my Hunter-Gatherer  forefathers and be able to discard something without a thought or give it to someone else who needs it more with nothing but joy.
I want to also challenge each of you to consider your relationship to things. I believe that our relationship to things is at the very heart of living the free, mobile life. Whether we are consciously aware of it or not, I think many of us find vandwelling appealing because it requires a simple, minimal life. At our core, we truly hate how enslaved we are to our possessions; we just have no idea how to break free from it.

Anything you cannot relinquish when it has outlived its usefulness possesses you, and in this materialistic age a great many of us are possessed by our possessions. Peace Pilgrim

What exactly is your relationship to the things in your life? Do you love them? Do you hate them?  Do you own them, or do they own you? Or have you ever even given it any thought? Most people don’t, they just go through life following the programming society has instilled in them.
Come join me as I search for a new attitude. But let me warn you now that I don’t have any answers yet and I can’t tell you what you should think. Each of us has to do our own internal struggling and reach our own conclusions.

Happiness consists, not in possessing much, but in being content with what we possess. He who wants little always has enough. ~Zimmermann

My riches consist not in the extent of my possessions, but in the fewness of my wants. ~J. Brotherton

We make ourselves rich by making our wants few.  ~Henry David Thoreau

Previous Living in Tiny Spaces; How Much House do you Really Need?
Next My View of Christmas