Living in Tiny Spaces; How Much House do you Really Need?

Living in Tiny Spaces; How Much House do you Really Need?

I’d gladly live in 72 square feet if it gave me this front yard! Wouldn’t you? There are two fundamental NEEDS of humans 1) Plenty of time in the open space of nature and 2) A tiny space to hide away in. Modern humans do just the opposite.

This is the first in a series about living in truly tiny places–I don’t mean a 400 square foot Tiny House–only in Super-sized America would a 400 square foot home be considered tiny! No, I mean living in a truly tiny space like on a bicycle, in a Toyota Prius Hybrid, an SUV, a 35 square foot camper or a 72 square foot extended van.
The first question anyone asks when they hear about living in a car, van or RV is, “How can anyone stand to live in such a small space?” The simple answer is that humans evolved in nature and so for most of our history our homes were always tiny, temporary and very simple; living in a tiny space is normal for humans because it’s what we’ve always done. What’s abnormal is living in a huge, empty space that requires a huge amount of sacrifice, money, effort and time to maintain!   No human ever lived that way until the last 10,000 years and even then only the very rich and wealthy did.
Because of our cultural conditioning we actually believe we need all that space to be happy, but it’s not true, in fact it’s just the opposite, are huge homes are making us miserable because we’re psychologically designed to be happiest in a tiny place and therefore living in huge empty spaces is very unhealthy mentally and emotionally.  In fact I’ve known several people whose therapists had suggested living in a van as a form of therapy. How could living in a tiny space be therapeutic?
A major part of your life is directly controlled by something commonly know as the “Lizard Brain” and it requires a tiny space to be happy. If it ain’t happy, you’ll never be happy!

Scientists have a theory called the Triune Brain and it basically says when you study the human brain you can see three clear evolutionary steps; 1) the ancient Lizard Brain that automatically controls Fight or Flight, 2) the Mammal Brain which controls feeding and feelings and the Higher Human brain that is creative and thinking.

Thanks for the image to: http://www.leaderthoughtship.com/2012_11_01_archive.html

You may not like to think you are influenced or controlled by the ancient Lizard Brain but you are. Much of what we do is an automatic response based on the powerful hormones controlled by the Lizard Brain. Most of the world’s senseless violence, fear, rage and even addictions can be traced directly back to it. In most ways our higher-order brains do control the Lizard Brain but the more you can bring them into alignment the less conflict and stress there will be in your life. You do that by understanding the needs of the Lizard Brain and giving it what it wants as much as you can.
A perfect example of that is the “gut feelings” we get that warn us of danger before our higher thinking mind can even begin to see it. The most ancient parts of our brain were developed strictly for our survival and they automatically process much of the sensory input (sights, sounds and smells) flowing into our brains  allowing our higher brains to do other things. That internal “knowing” that something is wrong is the Lizard Brain keeping you safe. It’s designed to bypass the higher thought process completely, greatly increasing your reaction times. A wise person works with it and tries to develop it. 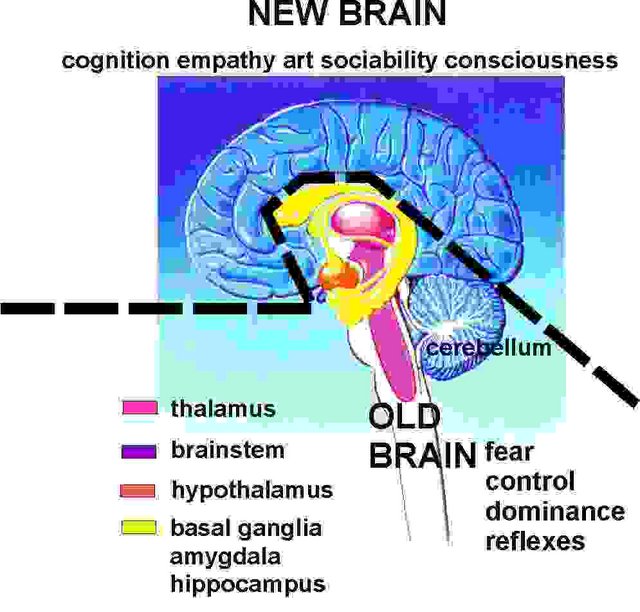 Thanks for the image to: http://www.perceptions.couk.com/conscious.html

What does any of this have to do with the size of your house?

A tremendous amount! The lizard brain craves a  tiny, simple, controllable, defensive home. You can see how that makes perfect sense–the Lizard brain only cares about survival and a small  space greatly increases your odds of survival. That’s why so many animals den in tiny spaces. I saw that in action just today.
I’m at Pahrump, Nevada and today they had a Balloon Festival and there were about 25 balloons in the air and they were all using their powerful propane heaters to get them to float. Those heaters are very loud and loud noises terrify my dog Cody. Like all Mammals, he has a Lizard Brain and it tells him to run away from loud noises–which he did. It also tells him to seek shelter in the tiniest space he can find–which he also did. 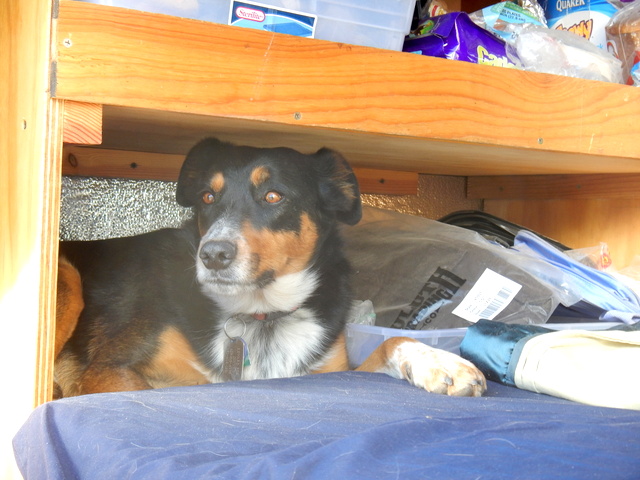 Cody hiding out in the tiniest space he could find.

Whenever there is a loud noise like gunshots, fireworks, thunder or balloons he runs and hides  in one of two places:

Why does Cody run to those tiny places whenever he’s terrified? Because it calms his Lizard Brain and he feels as safe and secure as he possibly can under great danger. Animals know instinctively to pacify their Lizard Brains and keep them calm by running to, and living in, a tiny place for safety. Too bad we aren’t as smart as they are! 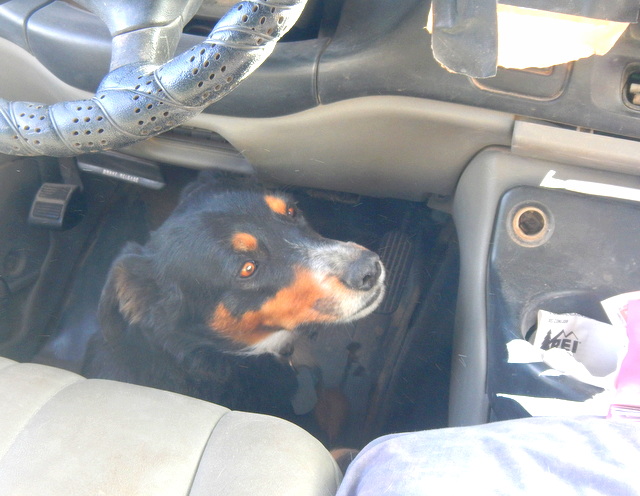 Cody in another tiny place he loves.

What’s Wrong With Us?
Humans also instinctively head toward tiny spaces, but since the rise of civilization we’ve been manipulated and brainwashed into choosing huge homes–even though they are very bad for us. Capitalism depends on home ownership  for continual growth so we’ve been trained to seek it out. Under the influence of brainwashing our higher brain keeps telling us how good for us it is but deep in our core it makes us miserable. That creates a conflict which is one of the primary sources of human misery in the developed world. We see the result of it everywhere: depression, anxiety, addiction, suicide, obesity, paranoia and rage. 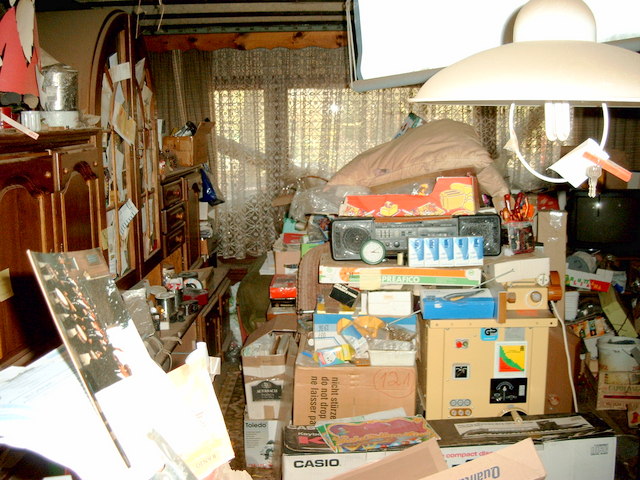 Hoarding is perfect example of a house being too big, so the owner fills it full of stuff so it feels small again. That’s the wrong way to keep your Lizard Brain happy. The right way is to live in a tiny space and have very little in it.

Let me give you one small example: hoarding. Why do people hoard so much stuff they have no room left in their houses? Their Lizard Brain demands it!! For whatever reason they are closer to and more in touch with that part of their brain and it compels them to fill their homes until finally they are a living in a tiny space. They NEED it to truly feel safe. Obviously they’ve carried it much too far, but the instinct to live tiny is very healthy and normal for all of us.
It also explains why so many of us “normal” people continually buy more stuff to put in our homes. We psychologically hate living in all that huge, empty space and we NEED to fill it.   We may not be as bad as the hoarders but how many of us can’t fit our cars into our garages because it’s too full of stuff?
A whole industry has sprung into existence because of our Lizard Brains’s need for a tiny space: Storage Units. Society tells us we NEED more space so we buy a bigger house but it’s emptiness makes us very unhappy so we keep buying more stuff in a futile effort to fill the empty space of our home.  Ultimately, we have to rent a storage unit to put it all in. It makes us happy for a little while, but then our fix of the drug wears off so we NEED to keep buying more stuff!!  Then we NEED a bigger house and then a bigger storage unit, and of course, we NEED to fill it all!! 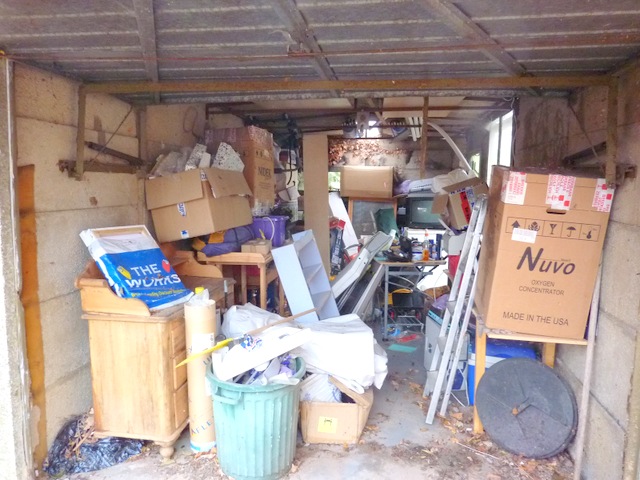 An overflowing garage is hoarding on a much smaller scale and the majority of us suffer from it–even vandwellers. Image taken from http://juliefountain.blogspot.com/2011_03_01_archive.html

You and I are the big losers in this viscous circle, but who’s the winner? Government and it’s masters the corporations. Don’t let them win.
There are only two things the Lizard and Mammal Brain inside you NEEDS to be happy and content:

Considering that nearly everyone in America lives exactly the opposite of that, is it any wonder that we are generally so unhappy?

Living in my van and camping here makes me one very happy Lizard/Mammal!!

Because of your cultural conditioning, you might be thinking that none of this applies to you, and you may be right; but I suspect you aren’t so unique. My guess is if you’d give it a chance, living in the  tiny space of a car, van or RV would make your heart sing in a way it never has before! The fact that you’ve gone out of your way to read my blog strongly suggests that’s true! Why not give it a try?
You probably have a car already, how hard would it be to try to make a bed in it and spend a night in it in your driveway, or drive out to a campground and spend a night? Just remember that it’s normal to hate it at first and that it would be much better in a mini-van or a van.
Give it a try, you have almost nothing to lose and everything to gain! 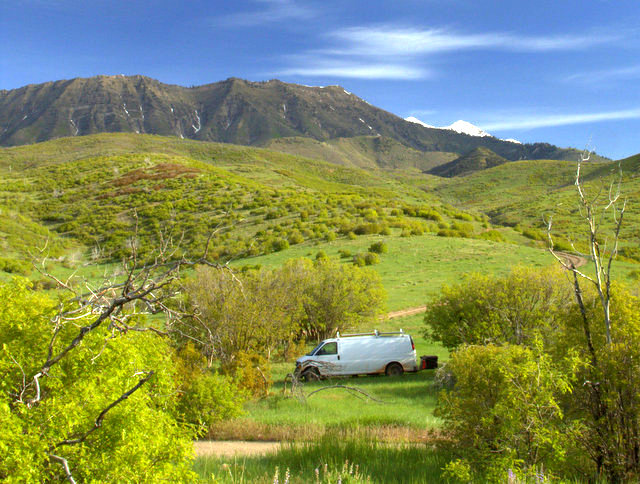 This camp made my heart sing long and loud!

Previous Living in a Tiny Space a Historical Perspective
Next My New Years Resolution: Finding the Happiness of Not Having Things