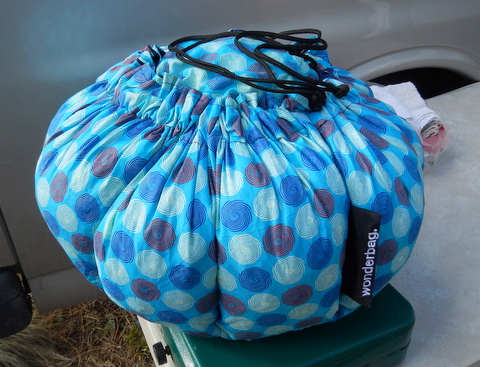 This is my Wonderbag all sealed up tight to keep nearly all it’s heat in. It’s just as good an insulator as hay, and much smaller and neater!

In todays post we are going to continue our look at how vandwellers can be preparing for survival in bad times with very little extra effort. We’ve been talking about cooking and now we specifically want to focus on cooking methods that lend themselves very well to vandwelling and survivalists. One thing we want is to burn less fuel because of its hidden costs beyond just the money you pay for it:

Hay-Box Cooking
There is a method of cooking called “hay-box cooking” that has been used for thousands of years because it solves many of those problems. The idea behind it hasn’t changed over the millennia and it is as simple as these three steps:

Thousands of years ago they didn’t have the kind of insulations we have today so they used the best thing they had available which was hay. A big pile of hay has a very high insulation value and if you put your pot into the middle of one it would stay steaming hot for a long time. Because they ate a lot of tough meats, roots, tubers, grains and legumes that needed a long period of time simmering they found they could cut their fuel use drastically by allowing the insulating value of the hay to do the simmering instead of burning wood, coal or dung. When you had to walk many miles to find more fuel that became very important! 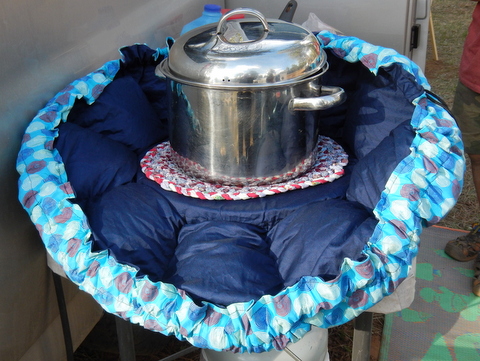 The Wonderbag opened up. This is not a good pot because the tall lid wastes space, it’s too big for Judy and I and the handles stick out to much. We replaced it with the MSR.

With our advances in technology we don’t have to rely on hay for our thermal insulation anymore, we’ve developed far more efficient methods. I’m going to review two that I own that work extremely well: a Nissan Thermos and a Wonderbag. I’ll start with the Wonderbag because you may have never heard of it and it is a wonderfully useful invention that I have fallen totally in love with! 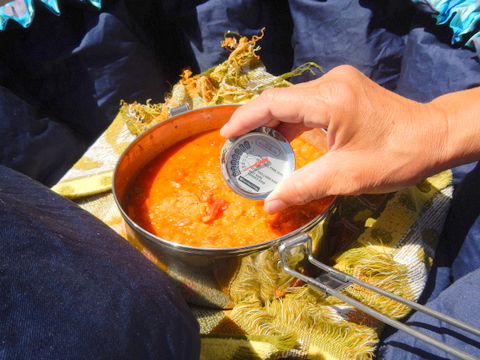 This is modern Hay Box cooking at it’s best. The Wonderbag is a heavily insulated bag that keeps cooking your food for many hours after you take it off the stove, and it does it in the same pot. This MSR pot had been in the Wonderbag for 3 hours and was still at 135 degrees. But we are at 7000 feet, so at a lower elevation it would have stayed warmer, longer.

Wonderbag.
Most cooks have taken a pot off the stove and wrapped it in a towel to keep the food hot until it was ready to serve. The Wonderbag is that idea on steroids! It is a bag designed to keep a pot of food hot for several hours. In effect it turns any  pot into a slow cooker!
I know exactly what your first thought is going to be, “What a bunch of baloney! Nothing can turn a plain old pot into a slow cooker, I can wrap a pot in a towel and it will work just as well.” No, it honestly won’t work as well; this thing is truly amazing and totally lives up to its hype! I have to admit that when I first showed it to Judy that was exactly her reaction, “Just another gimmick you’ve fallen for!” But now that we’ve been using it for a while she has become a believer and loves it as much as I do! See it on Amazon here: Wonderbag Non-Electric Slow Cooker 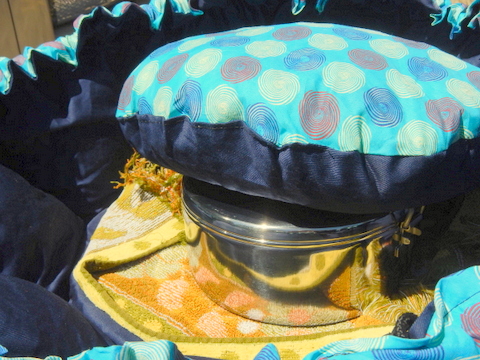 When you undo the drawstring the bag opens and falls away from the pot. Here you can see the “plug” that keeps heat from escaping from the top opening.

Essentially it is a bag filled with some kind of super-insulation that has an opening at the top with a draw-string closure. It also has large, insulated “plug” (I don’t know how else to describe it) that sits on top of the pot to keep the heat from going out the opening. Here are step-by-step instructions on how to use it:

We’ve been experimenting with different foods and every one of them has turned out well. For example, she cooked a pot of potatoes and quinoa by bringing it to a rolling boil and then letting it continue at a slow boil for about 8 minutes and then put the pot in the Wonderbag for 3 hours. When we opened it the food was still at 130 degrees and the potatoes were fully cooked the way I like them; soft but not mushy. That cuts the time it normally takes to boil potatoes in half, saving at least 10 minutes of cooking. Here is a chart of typical cooking times for common foods using a Wonderbag (at higher elevations you will need to extend the times):

Here are some tips on using the Wonderbag:

We think the Wonderbag works so well it’s worth looking for a pot that works great with it. I bought a MSR (Mountain Safety Research) specifically to work with the Wonderbag because it has a tight fitting lid that actually locks closed. It works wonderfully well in the Wonderbag and is extremely strong and durable. At $25 it’s fairly expensive, but because MSR makes premium backpacking products, it will last for many decades. I think it was money well spent! See it at Amazon here: MSR Stowaway Pot 1.6 L 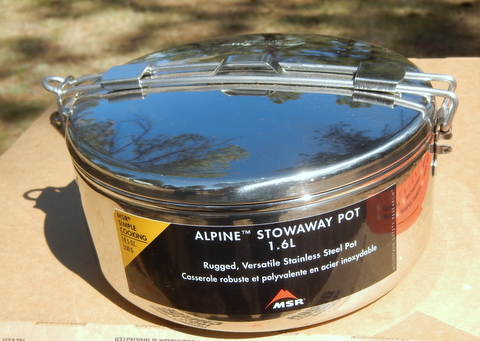 The handle on the MSR pot folds over the top and latches so the lid stays on tight keeping the food hot and preventing spills. 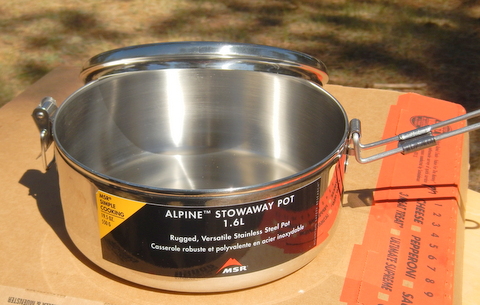 Here you see the pot open and the handle flipped over. It’s a high quality stainless steel and the perfect size for us! Highly recommended for $25!

Nissan Thermos
Probably many of you have heard of, or even tried Thermos cooking. In essence it’s exactly the same thing as hay box cooking with the Wonderbag except you must 1) pre-heat the thermos with boiling water 2) pour the food into the Thermos and 3) wash both the pot and thermos. I own a Nissan Thermos and it works well for thermal cooking, but it isn’t nearly as convenient because it burns more fuel and takes more time pre-heating the thermos. And cleaning them is usually a pain in the butt! For those reasons I greatly prefer the Wonderbag and recommend it instead. Thermos 48-Ounce Wide Mouth Stainless-Steel Bottle 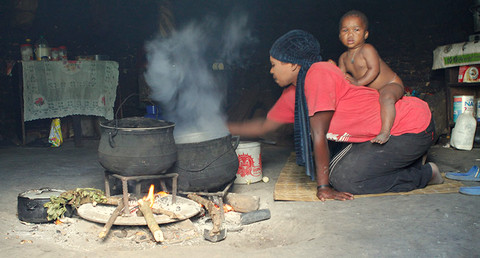 This is what cooking looks like in most of the Third World. Having a tool like the Wonderbag can literally change their lives! Whenever you buy one, they give one away free to a family in Africa!

Conclusion
You may be put off by the price of the Wonderbag which is $50—and I must admit that is a lot of money. But when you buy one, one is donated to a family in Africa and that is something I wanted to support. The woman who owns the company grew up as a child in Africa and she created the Wonderbag to meet a huge need she saw there. Because her heart goes out to the women of Africa, for every one sold in America, the UK and Europe she gives one away to a woman in Africa for free. You may be thinking, “Why would women in Africa want one of those?” Because many of them are so poor they can only afford food that needs very long cooking times and yet they are also too poor to afford to buy fuel for the stove. That means a huge amount of their time goes to cooking and a large part of their tiny budget goes to fuel or they have to spend many hours a day gathering wood. Having something like the Wonderbag frees them (and their female children) from breathing cooking fumes and allows them to do other things than cook all day like go to school or get a job.
I’d encourage you to go to the page on the Wonderbag site to see all the wonderful benefits that come to women in the third world from a Wonderbag: http://nb-wonderbag.com/Pages/WonderbagImpactSubpage and also http://nb-wonderbag.com/Pages/QuickFacts.


Thanks for shopping Amazon from links on my blog!

I make a few pennies from every purchase you make (even if you buy something else) and it costs you no more.

Previous Getting Ready to Move: Stocking Up
Next How to Add a Microwave to Your Van