Building a Sliding, Pull-Out Bed in a Van

This is my friend Andrews’s sliding, pull-out bed. It’s a tremendous space saver in a van and easier than you might think to build.

For a single person who’s decided to live in a van, deciding where to put the bed isn’t that hard, it either goes along one of the sides or across the back of the back door. However, there are times when the width of the bed can become a problem:

Andrew’s bed pulled-out for sleeping. It takes up a lot of his space in the van.

Most vans only have 60 square feet behind the front seat (6 x 10 feet) but if  your bed is 28  square feet (4 x 7), it takes up almost half the room in your van which doesn’t leave you with much room for everything else! To solve that problem, many people consider using a folding bed that either goes up against the wall during the day or a sliding bed that pulls in or out morning and evening.
I don’t recommend folding beds for these reasons:

The best solution I’ve found that solves all the problems is a pull out bed like my friend Andrew has in his van. He uses a futon mattress to fold up during the day to become a couch and pulls out very easily at night to become a large bed. It solves all the problems, 1) it’s simple enough it doesn’t take long to set-up or take-down,  2) the futon mattress is made to fold so it’s easy, 3) you still get storage space under the bed, and yet more room inside the van. Get a highly rated Futon Mattress from Amazon here: DHP–8-Inch Premium Futon Mattress, Full Size 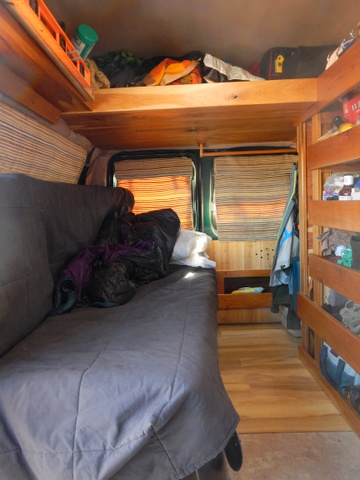 When the bed is slid in, it tremendously opens up the van and makes it much more comfortable.

I consider it the ideal solution for those vandwellers who want or need a big bed in their van. In this post I’m going to look at two specific examples and give you lots of pictures so you can visualize how it works. But if you don’t have the money, time or skill required for a sliding bed, I have a video out of how to make a much simpler bed that only cost $40 to build, see it here:
https://www.youtube.com/watch?v=busz98_QGvA
If you don’t see the video above, cut and paste this into your browser: www.youtube.com/watch?v=busz98_QGvA
Because every make, year and model of van has different dimensions, I can’t give you exact numbers or detailed instructions about how you should build the bed. The best I can give you here is the concept and once you have that you’ll need to adapt it to work in your van. If you have some carpentry experience, once you have the concept it’ll be easy to actually build it.
I’m aware that some of you don’t have the carpentry skills, tools or time to build this bed on your own.   If you are in that situation, I’d give serious thought to hiring a handyman to build it for you. Print out this post, including it’s photos and show them to him. This is fairly basic carpentry so any decent handyman should be able to instantly visualize what you want and be able to build it into your van.

Instead of using plywood as a surface, you use overlapping slats with a gap left between them so they can slide in and out.

This is one of those times when a picture is worth a thousand words, so it’s mainly going to be pictures, but let me give some instructions to help you visualize and build the bed:
To help visualize it look down at your two hands near each other with your palms up and  your fingers spread apart, then slide the fingers of the two hands together–that’s basically exactly what the bed is going to look like. Your going to build the bed in two parts and they are going to slide into each other. The two parts are NOT connected to each other at all–the second merely rests on the first and slides in and out.
Basically you’re going to build two beds, but one part of the bed will have 6 legs and it will not move and the other part will only have three legs and it will move. The side of the bed with only three legs will rest on the other half of the bed that has six legs and will share the center support legs with the first half.

It’s like almost any other bed except you build it with slats instead of plywood and leave a wide gap between the slats. Lets say you use 1 x 3’s for slats. On the immovable part of the bed you would put the first slat at one end (being very sure it’s square) and screw it down. Then you would put another slat down and put something very thin in with it, like a yard stick standing on end. You don’t screw this slat down, it’s just leaving room for the “finger” from the other half of the bed to slide in and out. The reason you’re leaving the gap from the side of the yard-stick is so it’s not too tight and slides in and out easier.

Looking up at the bottom of the bed. The two sides of the bed share the center set of legs as support. You can see Andrew put his 2x4s on end, while I have mine laid down. Either works, his is structurally stronger, but it takes up more storage space under the bed. I prefer the storage space.

So far you have one slat that IS screwed down, then a yard stick on end and a second slat that is NOT screwed down. Now you place a third slat and screw it down. Next, you pull up both the yardstick and loose second slat and place them both beside the third slat as the fourth slat. You do NOT screw it down, instead, you place the fifth slat down and screw it in. Only the ODD numbered slats get screwed down, the even numbered slats are empty space. The even numbered slats will be screwed down to the independent third leg and slide in and out of the empty space. Hopefully you’re getting the idea, every other slat is screwed down and becomes permanent.  The empty spaces will be filled with slats from the “fingers” from the other “hand”and they will slide in and out.
To build the second part of the bed, take the third set of legs you built and place them flush beside the finished first part. Now start taking the remaining slats and laying them into place in-between the slats on the finished part and screw them ONLY into the third set of legs. At no time will the two beds be attached to each other. These slats should be 3 1/2 inches longer than the first because they need to be wider to go over the third 2 x 4.

Andrew built his third set of legs out of 2x2s so they would be lighter to push in and out–that works well. He also didn’t place it flush by the first half of the bed to adjust to the size of his mattress, giving him a wider seat on the couch.

You could just use a tape measure and pre-mark the spots where the slats go but that introduces a lot more possibility of poor workmanship–a small problem in the beginning becomes magnified into a big problem by the end. Because most of us aren’t experienced carpenters, that is a distinct possibility. Doing it the way I described, as long as the first slat is screwed on square, and the slats themselves are straight, this should be fairly fool-proof.
Hopefully this allows you to get the concept, once you have that you can adapt it to your van, the size of your mattress and your needs. The bed I’ve described here is the simplest, least elegant method of construction but it will make you a wonderful sliding bed. You can use it as a beginning place and use different sizes of lumber or even different materials altogether, depending on your skill level.
At the bottom of the post I’m also going to show you photos from my friend Nicole from the http://www.cheaprvliving.com/forums/ of a slider bed that she and her husband built. It’s a completely different type of construction using fine carpentry techniques from  cabinet making. Few of us have those levels of carpentry skills so I’m just showing it to you so you can adopt it to framing techniques if you like it. If I wanted to do it, I’d basically build two complete beds out of 2x4s along the sides of the van and then add the slider between the two of them.  Mine will be much heavier than what they built, but much simpler and require very little carpentry knowledge or skill. It won’t be pretty either, while their’s looks like a beautifully crafted piece of fine furniture.

This is another example of a sliding bed made by Nicole and her husband on my forum. It’s an example of furniture-grade carpentry. Here the slider is put away to make a couch.

… and here the slider is pulled out to make a very large bed for a couple. The slider pulls out in the middle of the bed to make it a solid piece.

This bed is more like building fine cabinets than framing a house and requires much more fine carpentry skills. I don’t have those skills, but I could adapt the ideas and build this bed out of 2 x 4s which I’m much more comfortable with. The doors are a brilliant touch to let you get great access to the storage below the bed