Tent Living in the Desert 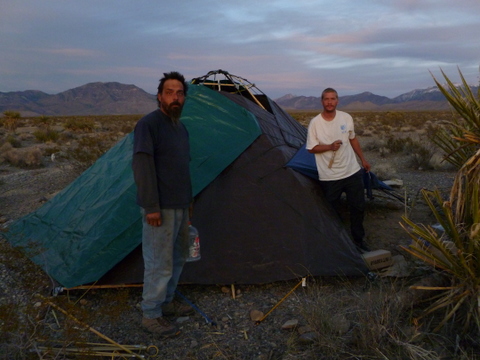 PJ is on the right along with his friend Turtle who helped him build his new tent home.

I met PJ in the Nevada desert where he had come to live. He had been diagnosed with toxic mold poisoning, commonly known as sick building syndrome, and he literally could no longer live in most houses. His body contained many common chemicals. The only choice he had left was to live in the desert so he could avoid mold. PJ had grown up in upstate New York where he had been continually exposed to homes that were full of mold. Some people can be exposed to mold and not be affected by it, but several factors came together to make PJ unusually susceptible to mold’s terribly destructive influence. Most of the medical community is woefully unprepared to deal with mold poisoning and PJ had sought medical help over-and-over again, only to be misdiagnosed. So he continued to live in homes that were full of mold, and continued to get worse. Finally, he found a doctor who knew about mold and he was diagnosed with mycotoxicosis. Fortunately, with a diagnosis he could qualify for Social Security Disability Insurance. The dry Nevada desert had the least mold possible, so he sold everything and headed west. He found the perfect place in Pahrump, Nevada. He could live on BLM land within a few miles of a town with a Wal-Mart and everything else he needed. To get around he bought a 50cc scooter that gets 100 mpg.

PJ’s life has been virtually ruined by our tendency to ignore the consequences of how we live. When something terrible starts to grow in your house, it is time to stop and find a solution. But the solution was hard and expensive, so everyone just ignored it. Everywhere we look around our planet, we see horrible things happening, terrible things growing and yet the solutions are hard and expensive so we just ignore them. Unfortunately, sticking our head in the sand won’t keep us from getting sick. So we can learn from PJ and become aware of our individual tendency to ignore serious problems as they grow in our lives. In the short run, it’s easy to be ignorant, but in the long run our lives will be drastically improved if we are pro-active instead of reactive. PJ was forced into a very green life by his tragic circumstances; hopefully we will make the switch willingly by our own free will.

PJ was on such a limited budget, he had no choice but to live in a tent. While he had found a place that was very tolerant of people living long-term on public (BLM) land, the one thing that would not be tolerated was any effort to build a permanent structure. So a tent became his only choice. The problem with the desert is that generally the winds can be very strong. Where he was in Nevada the winds were much worse than usual. Fifty mph (and more) winds that lasted for many days were not unusual. So he found that when he bought a tent, the wind would tear it to pieces in just a few months. Constantly buying new tents was eating into his budget, so he started looking for a solution. He decided to make a tent-inside-a-tent. The outside tent would be like a tipi but the supports would be rebar instead of trees, and the covering would be tarps. The result was super strong, cheap, and easy to work with. 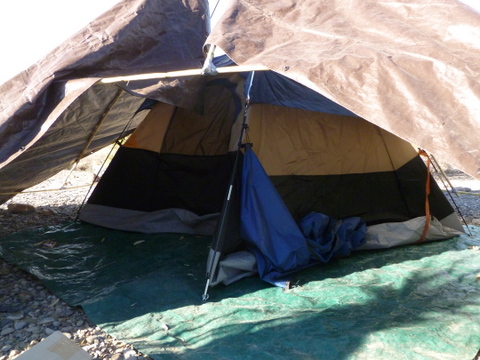 Here we see his store-bought tent inside his home-built tipi. The tipi protects the inside tent from the harsh desert winds.

If you are still considering what your green, mobile life will look like, don’t write-off living in a tent too quickly; it has many advantages. First, it is extremely green. If you have the money, you could easily have a Toyota Prius or even an older small economy car like the Geo Metro getting 30-50 mpg. Your total carbon footprint would be tiny. Second, it is extremely cheap. Your need for money would be absolutely minimal. Third, you could avoid extremes of temperatures. With an economy car, you could move up to the cool National Forest in the summer and back down to the mostly warm desert in the winter. Fourth, you would spend all your time in nature. No life is better than that. PJ was forced into tent dwelling, but we have another story of someone who chose it (check out the article Living Off-Grid in a Tent).

Let’s look at the details of how PJ built his tipi/tent: 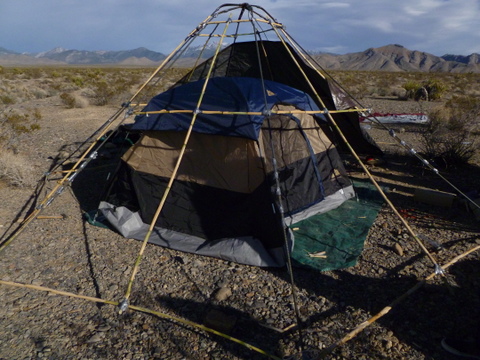 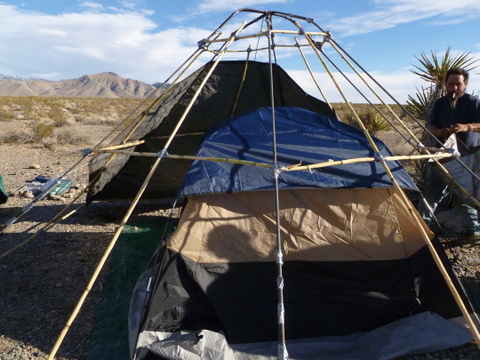 In the above pictures we see the basic framework of the tipi. Long pieces of Rebar are staked into the ground and meet at the top. The joints are made with simple baling wire covered with duct tape so that they don’t rip the tarp covering. To solidify the structure, they used bamboo as reinforcement. They are the tan colored poles in the picture. 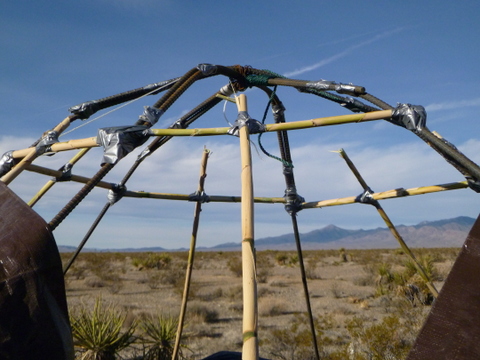 Working with rebar isn’t hard but it is tedious. However, they had plenty of time and with patience it can be done. They used a hacksaw to cut it into shorter pieces that were then beaten into the shape with a hammer. It’s easier if you have a small propane torch and pre-heat it before beating it into shape. The long pieces are 8 feet long, and the curved top piece is 5 feet long and curved into three parts. The two ends that are bent down are 2 feet long, and the straight center piece is 3 feet long.

In these pictures you see a joint. First it is wrapped with baling wire to give it strength, and then wrapped with duct tape to protect the tarps from being torn. On the picture to the right we see the stakes. They are 3 feet of rebar pounded into the ground. 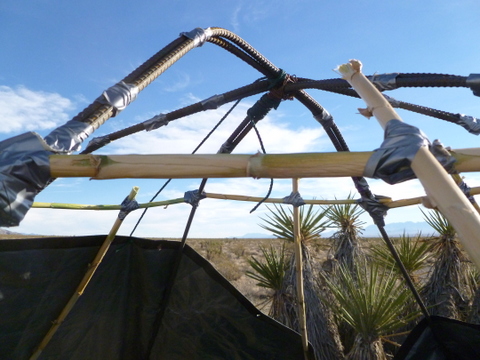 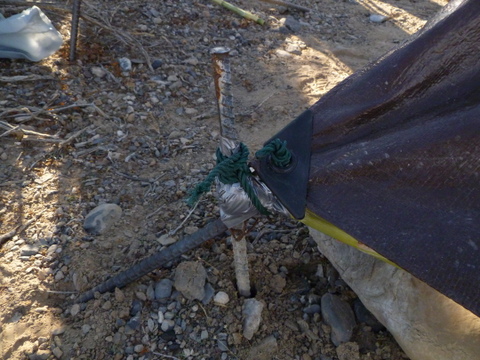 In these pictures we see the final step, covering the tipi with tarps. He just used cheap tarps from Wal-Mart and nylon rope to tie them down. Covering a round object with square tarps is somewhat wasteful because you have to keep adding tarps to cover the small areas that are missed. But they are so cheap it doesn’t really matter. If you have a sewing machine, and the ability, you can cut and sew them into a very tight fitting, snug covering. But the way PJ did it works quite well and didn’t require any sewing. 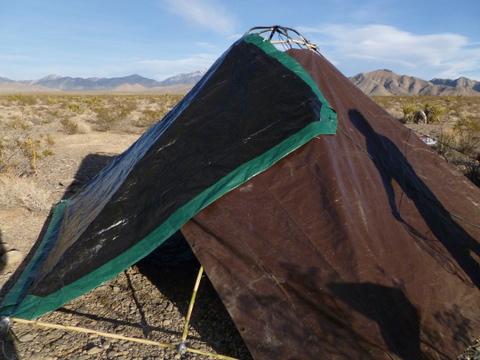 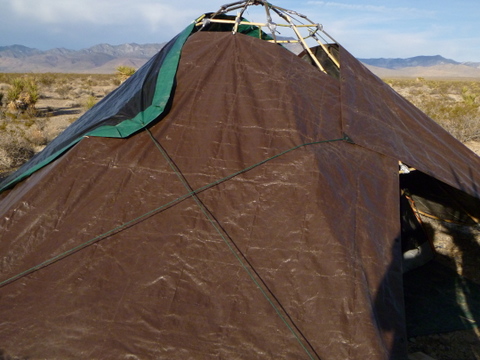 When it was all done it worked extremely well. The outer tipi was virtually impervious to the wind, while the inner tent was barely affected by it. As of this writing it hadn’t rained so I can’t comment on how it handles rain. But the inner tent handles rain quite well so it doesn’t matter how the tipi handles rain. If you are in an area with snow, the tip would work wonderfully well. It is plenty strong enough to handle the weight of heavy wet snow and would provide some insulation for warmth.

A word about living on public land: Nearly all public land has a 14 day stay limit, after which you must move. How far you to have move varies, but generally 25 miles is enough. How well the rule is enforced varies, but generally if you are within sight of an often traveled road, it will eventually be enforced. However, in both the desert and the forests, it is quite easy to get off the main roads and further back where you will rarely if ever see a Ranger. All you need to do is follow series of ever smaller roads off the main road. Generally the roads will get rougher and smaller as you go until you are all alone (a very good reason to have a smaller, high-clearance vehicle). Back there you can probably set up camp and be there for a very long time before a Ranger comes around and asks you to leave.

We are not recommending you do that, only telling you that you probably can. However there are two things you must never do: 1) Build any kind of a permanent structure, and  2) Do anything that damages the land either temporarily or permanently. The tipi described here is perfect because it is strong and durable but is neither permanent, nor damaging to the land.