In my last post we looked at why I have a dog and in this post we want to look at the practicalities of having a dog in a mobile life.
Should every Vandweller have a dog? 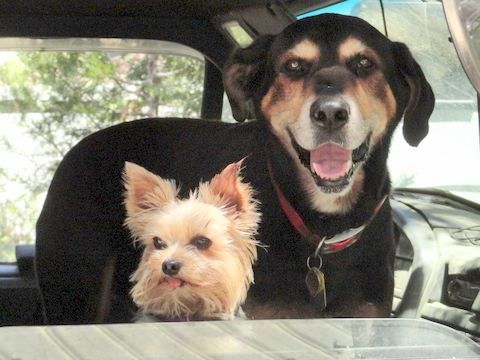 Whatever size your rig, there is a perfect dog out there for you! That’s Homer and Cheri’s dog Tony (the Tiger). They love each other!

NO! Absolutely not! Most of my readers are probably still living in cities and are still working at jobs. If that describes you, dog ownership is probably not for you. I’m a good example of that; when I got divorced and moved into a van, my dog (Abby) went with my ex-wife and kids because that was what was best for the dog and for the kids. I was terribly sad to be without her, but my needs were a distant second to their needs. I couldn’t stand the thought of Abby being alone in such a small space 9 hours a day. I also did not want her to be in the extreme cold and heat that I faced in Anchorage. So you have to carefully examine your circumstances and decide if a dog can have a good life with you in your van.
However, if you don’t have to work and are going to primarily boondock on public land, I would strongly encourage you to consider having a dog. I know they aren’t for everybody, but for the majority of people, they will give you back so much more than you could ever give them. And there is no better life for a dog (or for you!!) than living free and re-connecting with nature on public land.
How do you keep him cool in the heat?

What can I do if my dog has to be in the van while I go to work and it’s really hot ? 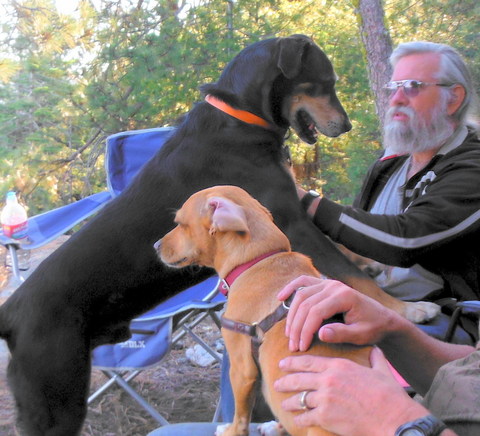 Homer knows who is the real boss, and he never lets me forget! That is James and Kyndal’s dog, Savanah in the foreground.

I have to be honest and say there is no good solution and I don’t think it’s fair to him to make him go through that. But here are some ideas I have heard from people who must do it:

Does he ever get cold? 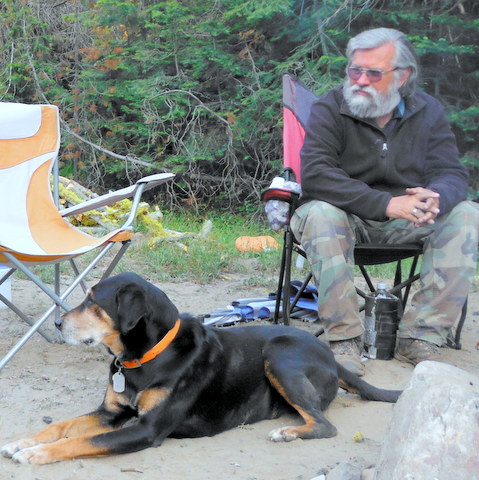 Notice I have a coat on; it was cold in the Sierras, but Homer stays comfortable anyway.

We have camped in some pretty cold temps but it hasn’t seemed to ever be a problem. I have never be able to keep the floor of any of my rigs warm, so it is at outside temperatures, which I have seen down to the low teens. For a while Homer had to sleep on the floor and I was always worried about him being too cold. I gave him a cozy doggy bed, which helps a lot. I would also cover him with his own blanket when we went to bed. He doesn’t mind the blanket but he is a restless sleeper (so many rabbits to chase in his dreams!) so he moves around a lot It’s unusual for him to still have it on in the morning. I’ve tried a blanket vest, but he acts like I am beating him, so I can’t make myself leave it on him (who could resist those sad puppy dog eyes!). Because Homer is an 80 lb dog, I needed a pretty big bed for the two of us, so I rebuilt the trailer to have a wide enough bed for both of us. Since then, cold has not been a problem.
Can I have a dog and work at a job?
If it is in the city, I can’t imagine how that could work in the summer. To me, locking a dog up inside a van 8 hour a day just seems wrong; I couldn’t do it to someone I loved. However, Homer loved working with me as a campground host. We were together nearly 100% of the time in the cool National Forest. We both loved it. I was also offered a job at an RV Park on the Oregon coast where it is cool all summer so that would have been perfect for Homer.
Another way it could work is if you are a seasonal worker. For example, I know people who worked for Amazon.com for the Holiday season and they have a dog. It is a little bit of a hardship for the dog, but it is only for a few months at a time so it seemed to work great for everybody. Since it was winter, heat wasn’t an issue. Another job that could work great is Pumpkin (at Halloween), Christmas tree sales, or fireworks sales (at New Years). You can make a lot of money in a short period of time and your rig is usually right there with you.
What kind of food do you give Homer? 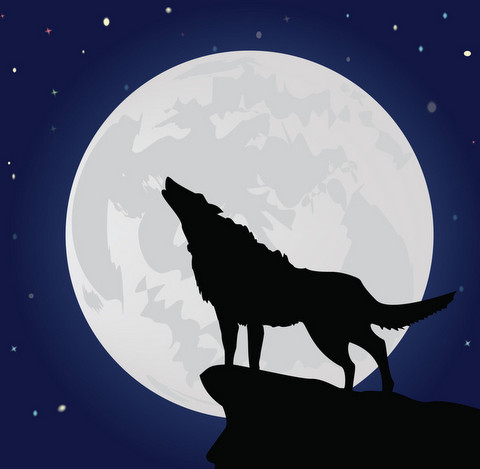 Dogs are direct descendants of wolves. The closer they eat and live like wolves the better. Wolves don’t eat corn, they don’t live in houses, they aren’t chained.   Treat your dog and yourself like a wolf and embrace your INNER TRUE WILD-NESS!

In the great majority of dog foods, corn is one of the primary ingredients, even in many “premium” brands. That is not acceptable to me so I feed him grain-free foods. While they are much healthier, they are almost always much more expensive. The exception is Costco’s Kirkland line of dog foods. They are grain-free and quite reasonably priced, so I am a Costco member. It costs $50 a year, but just the dog food makes it worth it for me. I buy his treats there as well. Their brand of dog biscuits is also healthier and cheaper. They sell 3-5 pound bags of dried chicken or duck breast strips that Homer loves and are very good for him. They cost much less per ounce than even Walmart so I buy those for him. I always have dry dog food out for him, but I also give him a can of Pedigree dog food every day. I think it’s the main reason he has such a shiny, wonderful coat.
Is he ever lonely; does he ever miss having other dogs around? 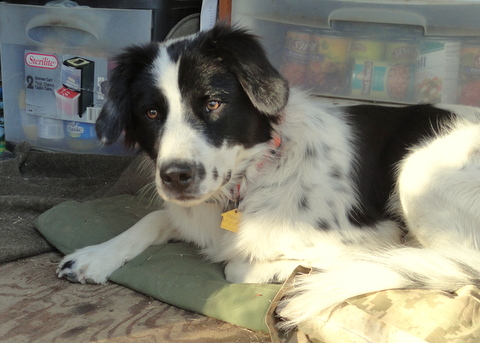 This can be a hard one if you aren’t traveling with a group. Dogs are pack animals and generally they prefer to have other dogs around. Most of the time I have had Homer we were alone, and he was happy. But now that I travel with friends, he is much happier with other dogs to play with. Homer loves Steve’s dog Zeke, and Zeke loves Homer; it is such a joy to watch them together!! Homer is very noticeably healthier and more ennergetic with Zeke around. Zeke is keeping him younger and Homer is mellowing out Zeke with his very mellow temperament! If you have the room, I think you should have two medium sized dogs. They will be happier and you will give and get twice as much love. Hard to see how that is not a good thing!
Is he a good watch dog?
Homer is the perfect watch dog. If someone new comes into our camp he is instantly at alert and probably barking. But he never barks at anyone else, and if I invite and welcome the new person into camp, he is instantly at ease. While most dogs aren’t that perfect, they are all territorial and nearly all will alert you that someone or something is coming into camp. If you are looking for a practical purpose to own a dog, this one is all you need! You will be safer if you have a dog in camp.
Will my dog run away?
Every dog is different, so I can’t really answer that. I am only aware of one boondocker who lost his dog and that was just a freak circumstance. When you provide a dog a perfect life with all the freedom he could want, why would he run away? Homer has nearly total freedom, so he stays with me because he wants to be here (and because I give him food, water, shelter and love in abundance)! Would you run away from that?
Because Homer has a lot of coonhound in him, he frequently ran away after animals when he was younger, but he was never gone for more than 2-3 hours. It was terrifying when he disappeared at first, but I adapted to the reality that he was as close to a wild animal as I could let him be and freedom brings much greater risk. So it was either a leash or greater risk. I chose risk.
Do you bathe or trim homer? 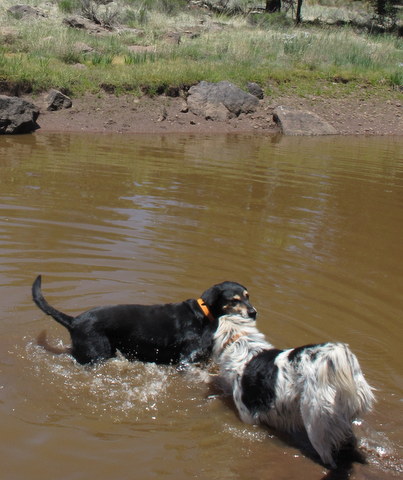 This is as close as Homer ever gets to a bath: playing in giant mud-puddles!

I have never had to, not once. He walks a lot on hard ground which naturally trims his nails and his short, course, oily hair just naturally cleans itself. But some breeds of dog will require their nails trimmed, baths and haircuts. It’s just another way of serving the one you love, and if you will look at it that way, it becomes a joy instead of a hardship.
What about cats?
I have never had a cat as a vandweller so I can’t really address that. I love cats and I would be delighted to have one now, but I am afraid he would run away. That may be an unfounded fear because I have known several vandwellers who own cats without any problem and I have only known one who lost his cat. Unbelievably, I know several RVers who have cats who let them run free and have been doing so for years. To me it seems inevitable that the cat would get lost, caught by a bird-of-prey, or eaten by a coyote, but I have never heard of it happening. The one person I know who lost his cat was camping in town when the cat jumped out and ran away never to be found again.
Homer is so big that he is at much less risk living as a wild animal than a cat would be. No single coyote would ever take him on and on several occasions he has even chased a pair of coyotes and they just run away from him. Only a Pterodactyl would be big enough to carry Homer away, and they are extinct! Losing an animal is so hard on me (especially cats) I can only own medium to large dogs which greatly reduces their risk.
What are the risks to dogs on public land? 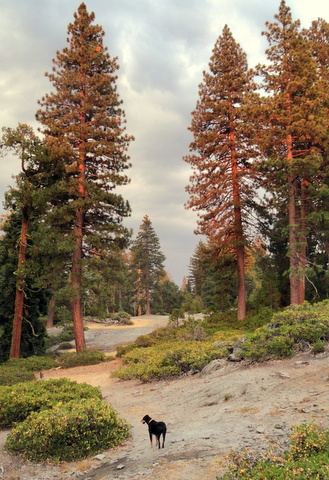 I brought Homer out here to make his life better, The surprise was that it made my life so much better. We have faced risks and hardships, but they all pale into insignificance compared to what we have gained.

Next Sunday I am going to do a post on this so I am going to brief right now. But the answer is pretty obvious: rattlesnakes, scorpions, coyotes, black bears, mountain lions, porcupines, ticks, fleas, and giardia. Homer and I have literally come face-to-face with each and every one of them (except giardia and scorpions) and we have come out unharmed. But for most people the risk to your dogs while boondocking is much less than he would face if you lived in a city. I think there is a much greater risk of him being run over in traffic, from being attacked by other dogs, being stolen or running away and being lost in a city than any risks in the country. You will have to make your own decision about that.
If I missed any questions, feel free to ask in a comment, I didn’t intentionally skip it, I just forgot!
Previous Keep it Simple Sunday: Vandwelling Dogs Part 1: Why I have a Dog (shouldn't you?)