Living or Traveling in an Alaskan Camper

Living or Traveling in an Alaskan Camper 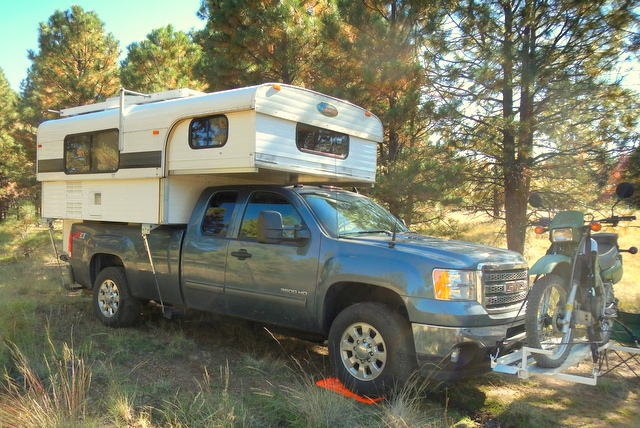 The Alaskan Camper is hard-sided and the top goes up and down. Here it’s up and it’s remarkably comfortable inside. Very open feeling but with excellent storage.

In my last post we talked about data plans for Smartphones. I promised I’d tell you about useful Apps for vandwellers but I’m going to postpone that so I can have a little more time to research and test them and then give you my best report.  Instead, today I want to tell you about my friend Greg’s Alaskan Camper. 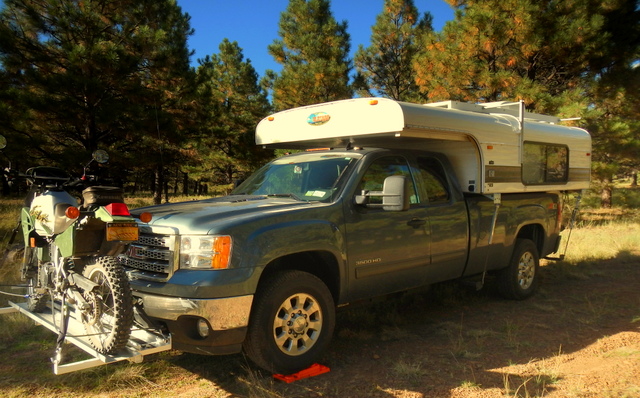 Here it is with the top down. The low profile gives it three huge advantages: 1) Far better aerodynamics and increased MPG 2) It can go many more places in the back-country than any other camper. 3) It’s not top-heavy in a cross wind on the freeway or on a side-hill in the back-country.  Both are giant advantages! The boat rack is an option ordered from the factory as is the Air Conditioner. He added the solar.

He is very close to being able to retire  so he’s thinking about what he wants to do with his life next.  Like many people, he feels the call for the mobile life but he’s not sure if he wants to do it part-time or full-time. Either way, he’s sure he’s going to travel…a lot! In preparation he’s bought an almost new 4×4 Chevy 1 ton truck and and an Alaskan Camper. He is going to turn into an adventurer in his Golden Years and this is the perfect rig for it! 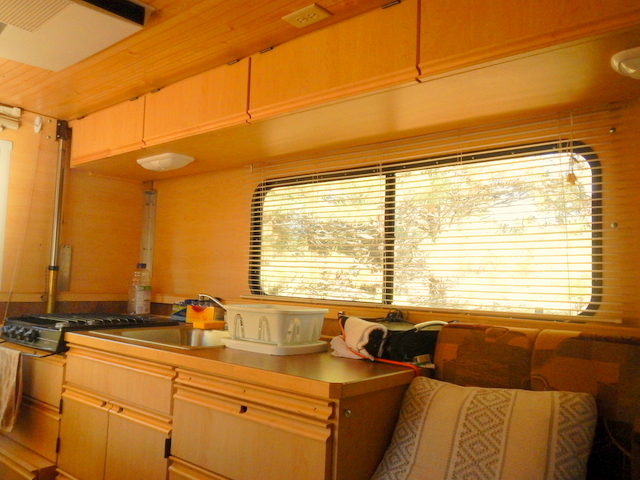 Inside, it’s all beautiful woodwork and very open. Because it goes up and down there can’t be wall dividers. that gives it a very open feel!! It also allows it to have many very big windows! I loved being inside it! Notice the hydraulic strut in back. It has very, very nice woodwork! Everything is top-quality

If you aren’t familiar with them, Alaska Campers have been around for a long time–since 1953! They were originally designed for workers going to Alaska on the very rugged Alaska Highway. They demanded a quality product that could handle the abuse Alaska would throw at them and the Alaskan Camper was the rig of choice! I can remember seeing them and hearing about them when I was a little boy growing up in Alaska. I assumed they were made in Alaska so I was surprised when I learned they were made in Chehalis, Washington.

They’re surprisingly light for all you get.

To be honest with you, I didn’t even know they were still in business so I was surprised when Greg dropped into my camp with an Alaskan Camper on his truck. The reason you don’t see many of them is because they are such high quality that they are expensive, that limits the number of them on the road. They are rare enough I’ve never known anybody with one or been inside one. I was so excited to see Greg’s, I immediately asked him if I could do a story on it and he graciously agreed. Here is their website: http://alaskancamper.com/sitemap.htm and also here: http://www.alaskancamper.net/index2.html 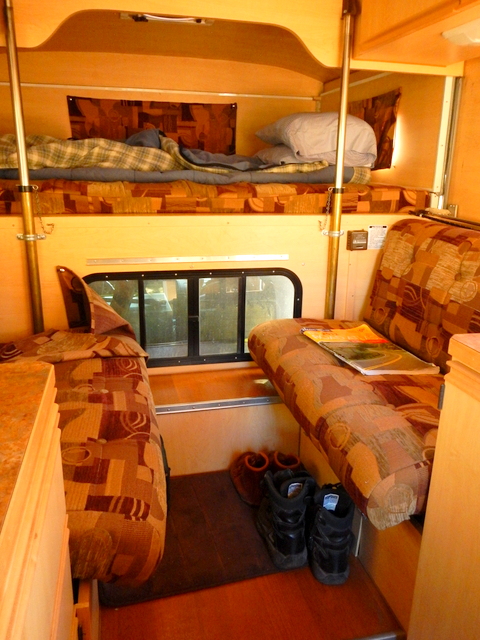 Without a bathroom or a closet it has more windows and is very open feeling. Every other camper I’ve ever been in made me feel closed-in, almost claustrophobic. Notice the electric powered hydraulic struts up front that lifts the top at a touch of a button.

Here are the advantages they offer:

Here are the weights and prices of both the Cabover and Non-Cabover models:

Those advantages may sound like they aren’t worth the very high price of an Alaskan Camper, but let me tell you another friends story. This friend bought a very large Arctic Fox slide-in camper. It was beautiful  and extremely comfortable, and Arctic Fox has a good reputation as a quality product. But as soon as he drove it off the lot it started to fall apart. He had it back to the factory several times in the first year for major structural failures and they did half-ass repairs, just enough to get him out the door but not really solve the problem. He had it for 5 years and it was one constant problem after another. Essentially he rebuilt it until it was basically usable and then he got rid of. Why? Because it was so big and cumbersome he couldn’t take it into the back-country. He had put it on a 4×4 truck and wanted it to go into remote areas on adventures, but it was so huge it couldn’t do it! 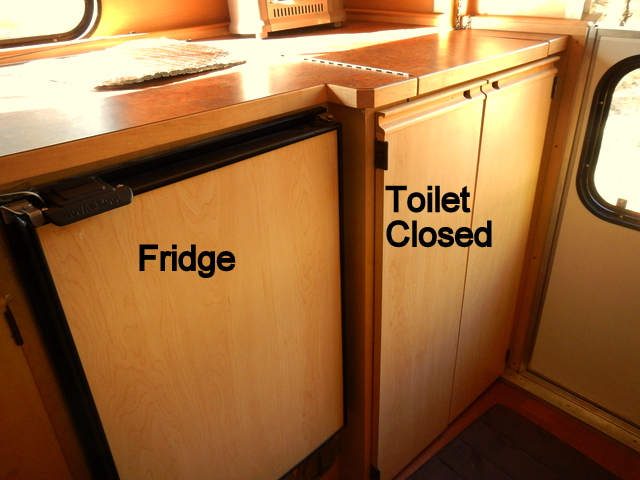 You may be wondering, “Where’s the toilet?” It’s right here in this picture, don’t you see it!

A few years ago I invited him to visit me in my camp in the Sierra NF, I told him I thought he could make it in alright. But when he got there I met him at the beginning of the rough part and guided him in. His camper was so huge that we had to walk along and watch for tree branches at the top of the roof. Many times we had to stop and he climbed up and cut off dozens of branches that would have torn up the camper. At one point we had to cut down a small tree that wouldn’t let him make a corner. Eventually we got him almost into camp but when I pointed out the best campsite he tried to get to it but he simply could not, the camper was too big. With this Alaskan Camper, it would have been easy-peasy, no muss, no fuss!! 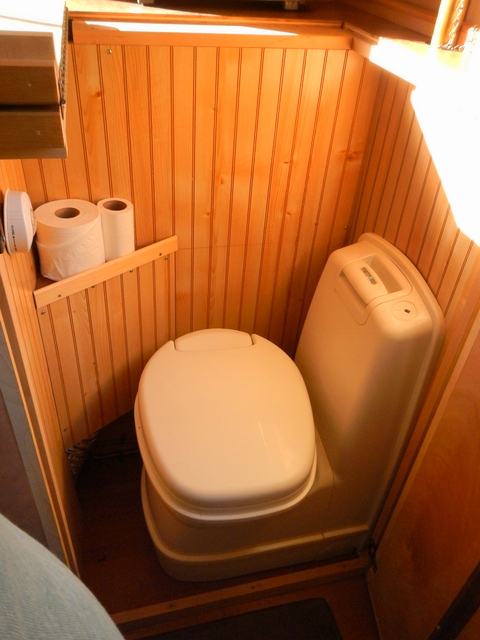 Here, it is, hidden in plain sight!. The top folds over and the doors open to reveal the cassette toilet. There are no gray or black water tanks, just the 27 gallon fresh water tank. The shower is outside so doesn’t need tanks and the toilet goes into a cassette that you slide out and take and dispose of down any public toilet. Or you could line it with garbage bags and and just throw those away!

I’m telling you all that to point out why an Alaskan Camper is worth the money. First, it’s not going to fall apart when you drive it off the showroom floor because it’s top quality and made by people who take pride in what they do. Second, with the low top it can can go into tight, narrow forest trails with no problem. Third, while it’s smaller it’s just as comfortable as the huge campers but I think it has better storage than any other camper I’ve seen. Fourth, because of it’s far superior aerodynamics and lighter weight, it gets much better MPG. 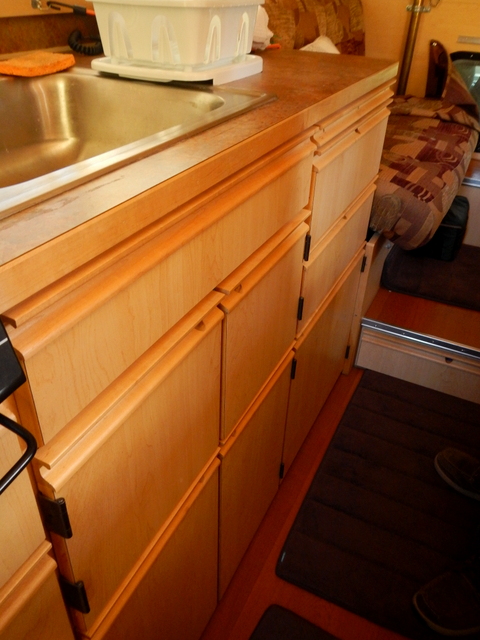 Look at all these great drawers… 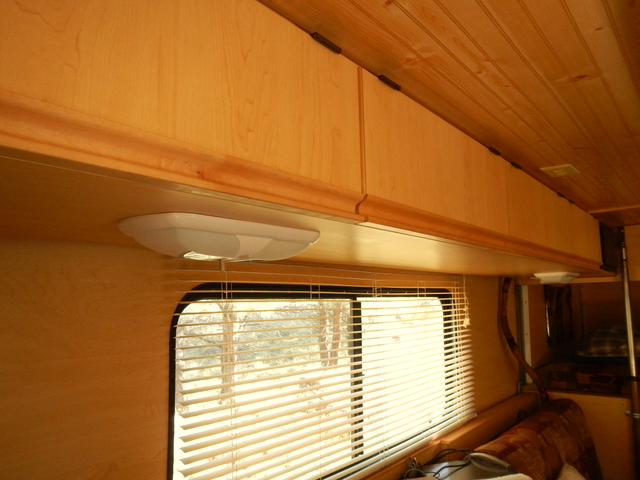 …and all this storage on both side walls! And all the light from the large windows! I love this camper!

I know some of you will be thinking that a pop-up camper would be a better choice because they’re even lighter, smaller and much cheaper! But I do NOT recommended pop-ups for full-timers because they have too many disadvantages: 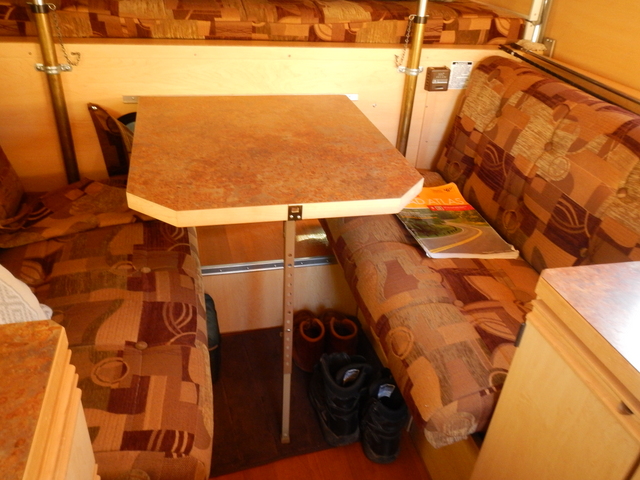 Of course it has a very large dinette that folds away to be wide open or it can drop down to become a bed.

Let me tell you a story about another friend. This friend retired and bought a pop-up camper on a truck. He lived in it for one year in the Arizona desert and the next spring he sold it and bought a hard-sided camper. He just found it too cold and and the constant wind made it extremely uncomfortable. Their few advantages can’t make up for the extreme disadvantages. 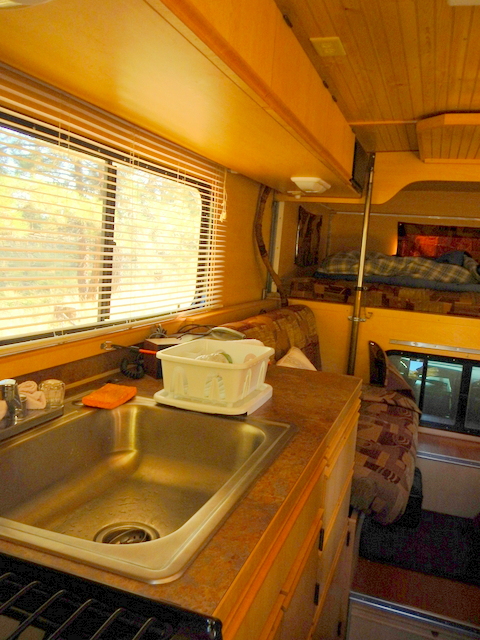 It has the biggest sink I’ve ever seen in an RV.

I think the Alaskan Camper is just about an ideal home for anyone who is looking for adventure in the back-country, but the newer ones are so expensive many of us can’t afford them. Fortunately, they are so well built that there are still many older ones on the road for pretty reasonable prices. If you are interested go to this page on the Alaskan website and see many Alaskans for sale from as far back as the 60’s, and as cheap as $850 and several from the 70’s for around $2500. I couldn’t get the link to work for the page. so instead go to this page and on the left you’ll see a list of menu buttons. Click on the “Classified Ads” button.
http://www.alaskancamper.net/index2.html
So here is how you get the top raised: 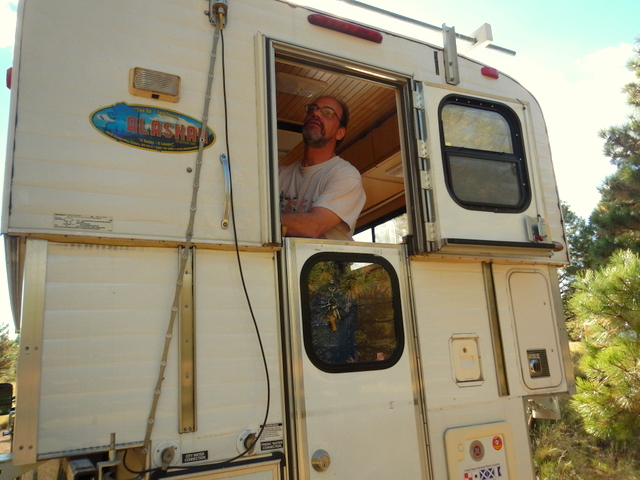 The first step to raising it is to release a lock that keeps the top from blowing away in hurricane strength winds. Next, you open the bottom of the double doors and reach in and hit the hydraulic lift switch. It raises the top up into place. Once fully upright you step inside and set the safety latch so it can’t accidentally fall on you. It is possible to get in, use and even sleep in the camper when the top is down. 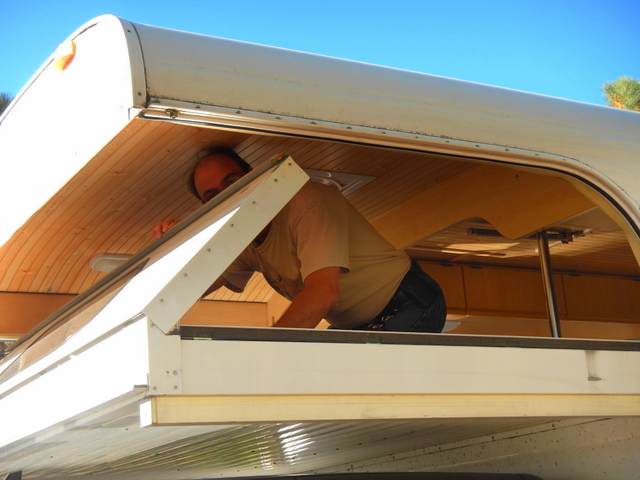 After the top is raised and locked you have to climb up on the bed and raise the sides and latch them into place. Very simple. 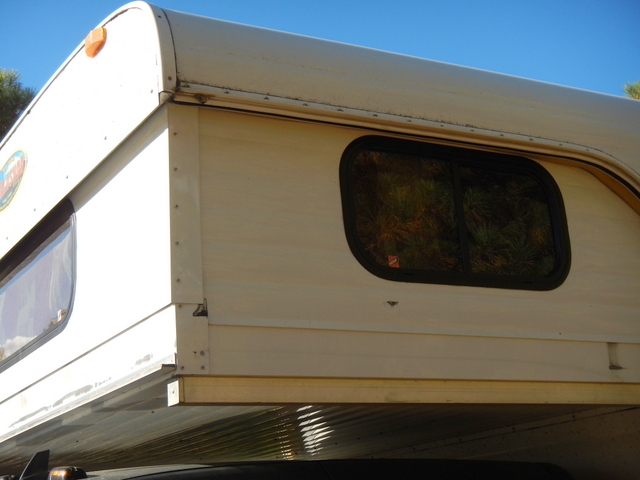 Here, the cabover done. It seals well and is water tight. They do make models without any cabover at all. Of course they are cheaper, lighter and even more aerodynamic. 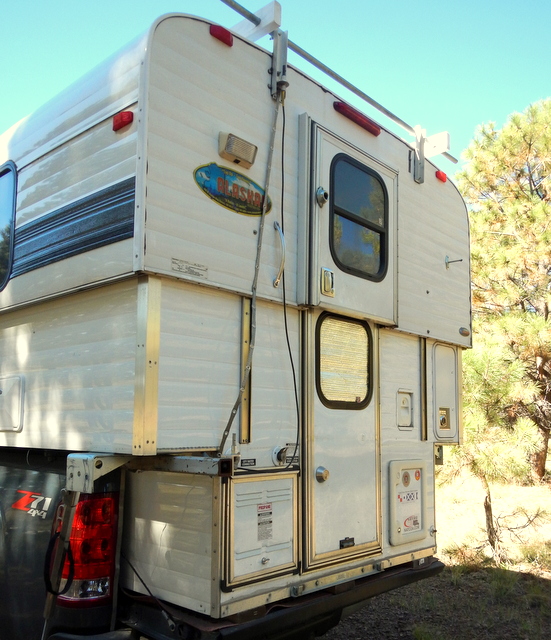 Here’s the back when it’s done and open.

Here is a list of standard features for the base model that I gave you the prices above: 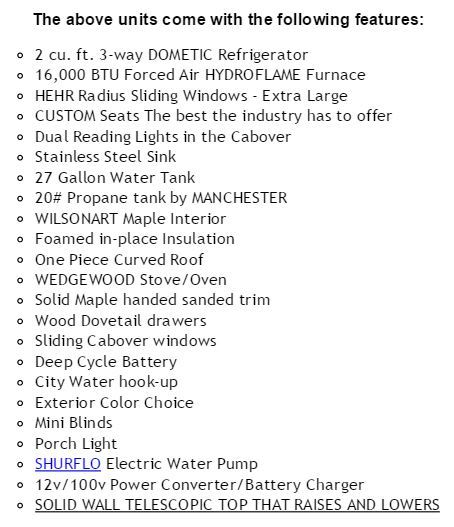 Be sure to check out Greg’s Youtube channel where he details his build of a GMC Savanah van for vandwelling: https://www.youtube.com/user/vtwinkicker
Previous Living Off-Grid in a Toyota Tacoma Pickup with a Camper
Next Rigs of Moab Part 1: Live-Aboard Adventure Vehicles