The Grand Canyon from Helicopter: Photos by GoPro Hero 3

The Grand Canyon from Helicopter: Photos by GoPro Hero 3

This post is dedicated to the victims of the 9-11 terrorist attack. I watched several specials on it the night before this flight and it just served to convince me more than ever to LIVE my life NOW! Tomorrow is NEVER guaranteed for any of us. There are no do-overs in this life.
Yesterday, (September 12, 2013) I took a helicopter ride over the Grand Canyon. The Canyon is so huge it is very difficult to comprehend the scope of the thing; that’s where the helicopter comes in. By flying over it you can finally start to see its scale. 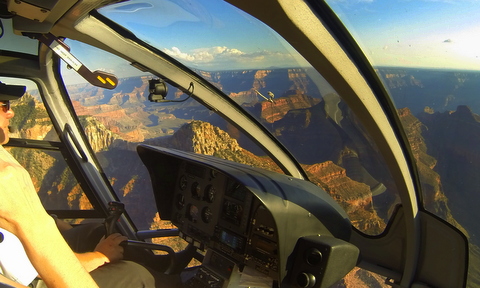 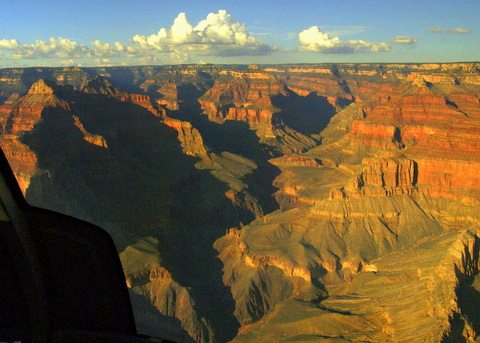 Taken with the Sony DSLR

It’s an expensive trip but I decided it was a once-in-a-lifetime thing, so I decided would do it. Normal price is $200 for a 25 minute flight, and I upgraded (that cost another $30) to an Eco-Star helicopter because of its superior view. I also paid an extra $50 to get a front seat. I’m glad I did, the view from the front seat is awesome! There were three of us in a front row, the pilot on the left, another passenger, and myself. I had an incredible view! This post is going to be mainly photos from the trip. 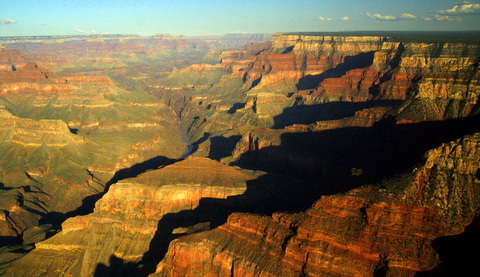 The Colorado River taken with the Sony DSLR.

You can see in a lot of these that we were just about dead-even with the top of the rim to the Canyon. By law they can’t fly below. Right out of the GoPro, the pictures were flat and bland, so I had to edit them. Using the Picasa photo editing program, I hit the Saturation button once, then clicked okay, and that is all that was done to this photo.
I told you in my last post I had just bought a GoPro adventure video cam, and this was my first time using it. It cost $329 for the Hero 3 Black Edition, but it is totally worth it!! It has a couple of huge advantages:

Here is a link to it on Amazon: GoPro HERO3: Black Edition

The camera outside it’s housing is tiny, about the length of my thumb. Here I’m comparing it to my Nikon AW100, a Camera I am very happy with!

For this trip I mounted it onto a head-strap and wore it like a headlamp. It was remarkably comfortable; I wasn’t in a hurry to take it off at the end of the flight. In fact I think I could easily wear it all day. It took some work to learn how to aim it, but once done it’s easy. One nice thing it does is take still-shots as it records video. You can set the interval and I think I set it to take a still shot every 10 seconds. So at the end of the flight I had both a video and many still shots of the flight all without using my hands. The photos speak for themselves! I also shot with my Sony DSLR in my hands. In the caption of each photo, I will tell you which took the picture in the caption.

When you are having adventures, you have to focus on what your doing, not on the camera. All I had to do was put the GoPro on my head, turn it on, and forget it was there. Next month I am going white-water rafting and I will do the same thing.
Here is a link to the head-strap mount on Amazon.com ($10 as of now): GoPro Head Strap Mount for HERO Cameras 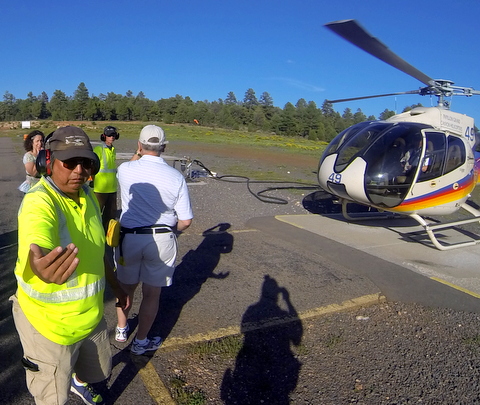 Here we are loading onto the aircraft. I think he was getting impatient with my picture-taking! The camera stopped the blade motion but the engine is on and the rotors are turning. You can see how long the shadows are–this was the last flight of the day: 5:20 pm to get the best light. 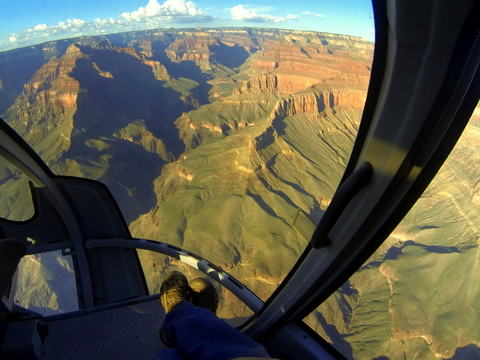 The lens was all set the same, but for some reason on this shot it got a lot of fish-eye effect from the GoPro. Probably because the horizon was so far away.

With the GoPros wide angle you can see just what an incredible view I had. The floor extended out in front of me and my legs are stretched all the way out. But I could still see nearly straight down. Here we are flying back to the airport through canyons inside the GC NP. 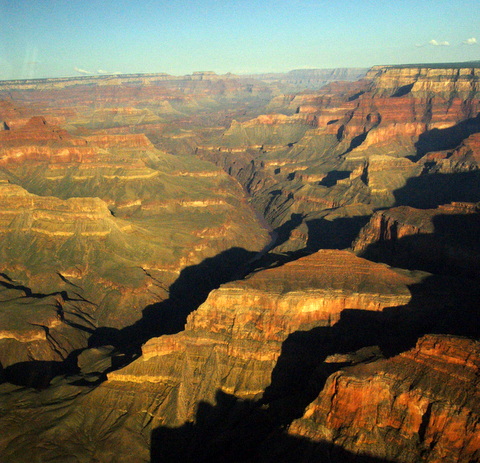 GoPro–flying back to the airport. The weirdness is reflections on the bubble window. The whole area around the Canyon is dense, Ponderosa Pine forest for as far as the eye can see. That’s Mt Humphrey on the far horizon–the largest mountain in AZ at more than 12,000 feet. 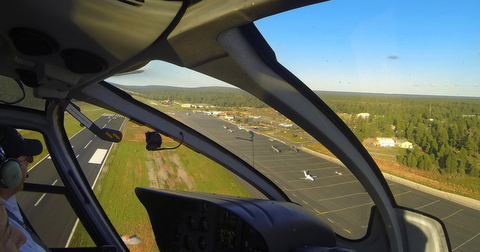 Taken with the GoPro as we were landing. You can see a private jet in the foreground. 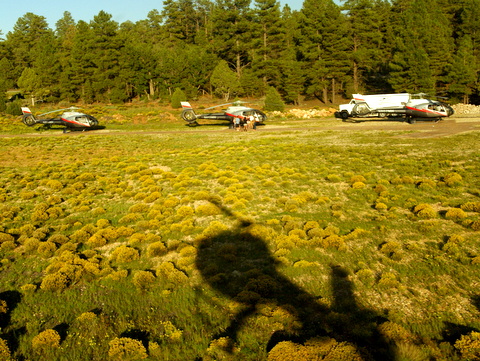 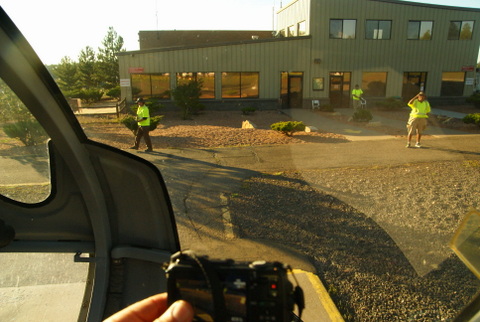 The chopper I flew on. Sony