The mountain range to the east of Goosnecks has an amazing variety of formations and patterns in it, and it explodes in color at sunset. I can’t imagine a much more beautiful campsite. I had surprisingly good internet from here thanks to the Verizon Sleek and directional antenna.

Before we spent the two nights at Monument Valley, Suanne and I spent one night at Goosenecks SP in Utah. We left our old camp near Prescott, AZ fairly early but by the time we got to Monument Valley it was about 4:30 pm and I didn’t see any reason to spend $21 just to sleep in a parking lot. So we went on up to Goosenecks instead with the idea that we would get up early the next day and go to Monument Valley and pay the fee, but we would get to spend the whole day there exploring it and seeing it in different light.
I’ve always loved Goosenecks SP and this was at least the fourth time I’ve camped there, and every time I look forward to it just as much–however, this will be my last time camping there. Up till now it has been free, no entry fee or camping fee, but they’ve added both to it. The entrance fee is $5 and to camp is $10. There weren’t any hosts when we were there so we interpreted that to mean that we had to pay $15 total, $10 to camp for the two of us and $5 for the extra car. The host was there the next day so we must have been right. 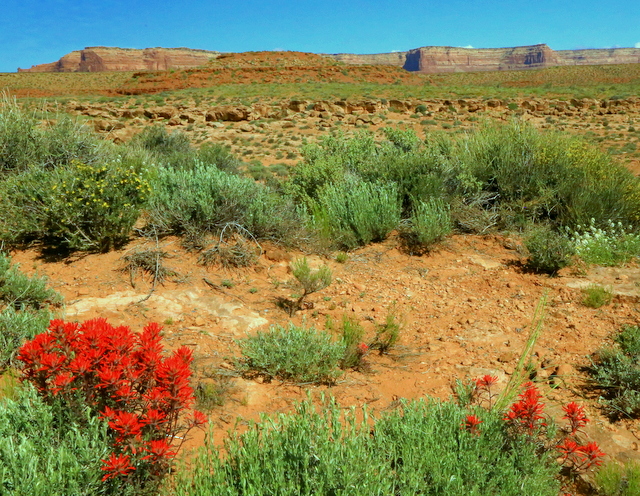 About a 1/2 mile from the Park is where I found these Paintbrush in bloom.

Because there are lots of places near there to camp for free, I won’t camp there again. I don’t see any point to pay for what I can so easily get for free. For example, just up the road is Valley of Fire, a beautiful BLM area that has free camping. However, I don’t really object to them charging for the Park because it was very heavily used and must have been costing them a fortune. Every time I’ve been there there were dozens of people camping there and using it’s facilities without paying.  It has both a vault toilet and trash cans, and the last time I was there it was used so heavily that people had started to just throw their trash down on the ground around the overflowing trash cans and the toilets were filthy. So much for gratitude and appreciation of a wonderful, free gift!
The way I look at it is if I am going to use your services, I should be willing to pay for them. The Park is a long ways from anywhere so cleaning the toilet and paying for trash removal must have been very expensive and to do it right and bring in a host was going to cost even more. So this year they added the fee and as a result there was no trash on the ground and the toilet was very clean. There were also about half the number of campers. But that’s fine with me, if I don’t want to pay, I won’t use the facilities. 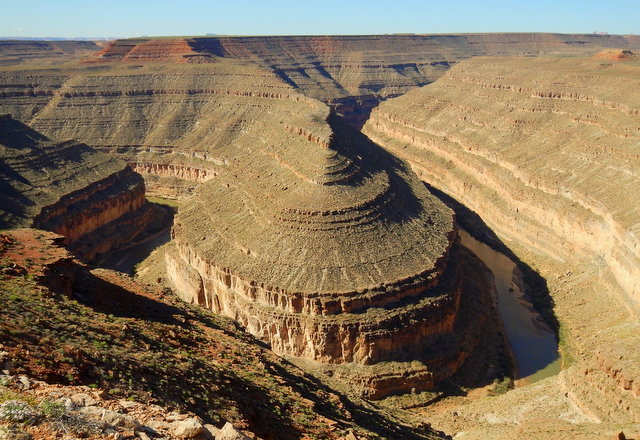 This is why it is called Goosenecks SP, because the San Juan River continuously makes these sharp U-Turns leaving it looking like a Goose Neck. 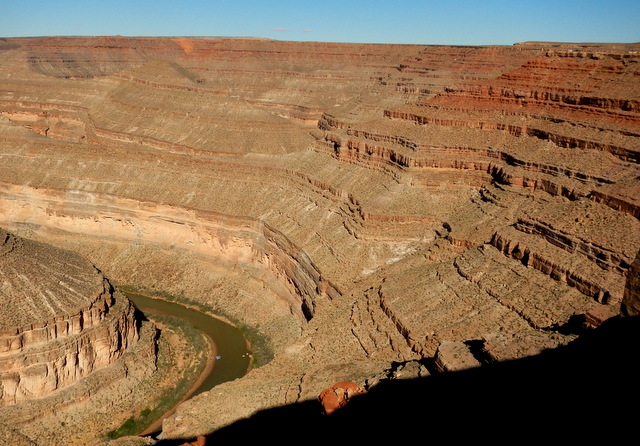 Looking at the Gooseneck from the side, you get an idea of how deep it is. In the river is a tiny blue dot, that’s a raft with people camped down there. At the very top, right hand side below the horizon are some white dots, that’s the Park itself.

The reason I’m telling you about it is because I know some of you don’t mind paying for camping and this is one of the prettiest spots I’ve ever been. Its called Goosenecks because of a unique formation of the San Juan River that flows through the Park. As the river is digging its way down through the ground over the course of millions of years, it comes to hard places that don’t yield as easily as the ground around them. Water doesn’t fight it’s way through, it yields and goes around if that’s easily done, and the ground around it is so soft, it’s easier to go around than through. On this stretch of the San Juan River there are six of the goosenecks where it has to go around a hard object and from the Park you can see two of them. From the first gooseneck to the last one is only one mile in a straight line, but the river flows six miles in that time. 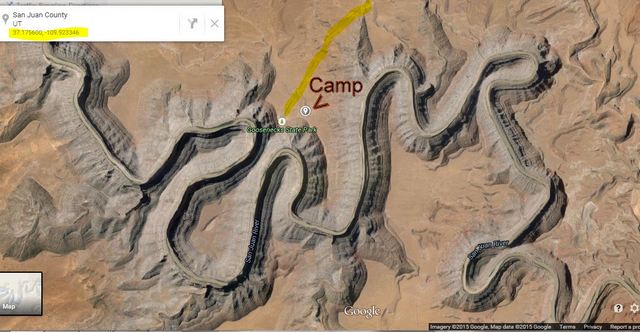 This is a Google Satellite view of the area. It looks like a winding mountain range but in fact it is a deep, meandering canyon in the ground instead.

Another reason I was glad we were spending the night at Goosnecks is because the drive in the morning south into Monument Valley is so beautiful. There is one spot on the road where you come over a rise and you see the beginnings of the monoliths in the Valley and the road leading up to them makes a great photo conveying the feeling of traveling great distances through the desert on the open road. It’s always been one of my favorite shots in the area! It only really works early in the morning when the sun is hitting the Red Rocks of Monument Valley; by afternoon you are shooting into the sun and in late afternoon and evening the monoliths are in shade and are dark blobs, not glowing Red Rock. 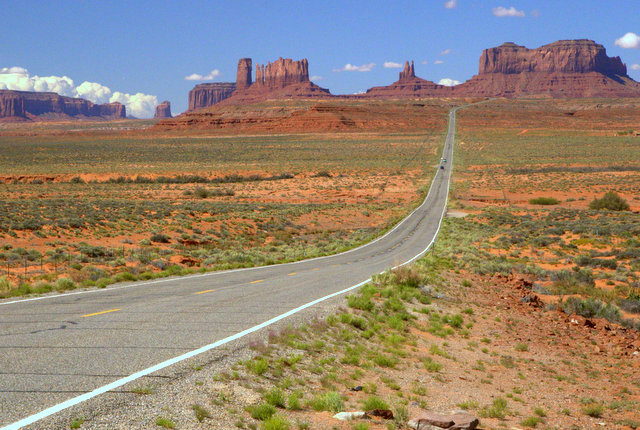 If you want better photographs there are two lessons I can give you in this post:

The nearest town to Goosnecks is the tiny town of Mexican Hat. It’s just a gas station, a few motels and cafes, but it will have to do. It’s named after an interesting rock formation just out of town. 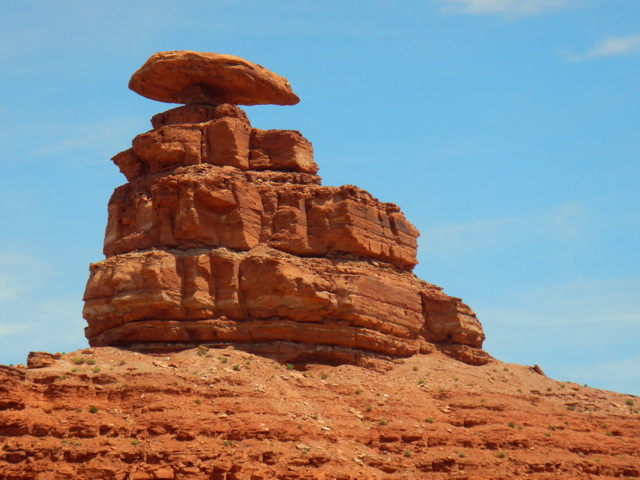 Next up is our Moab camp, so that will be coming up very soon. 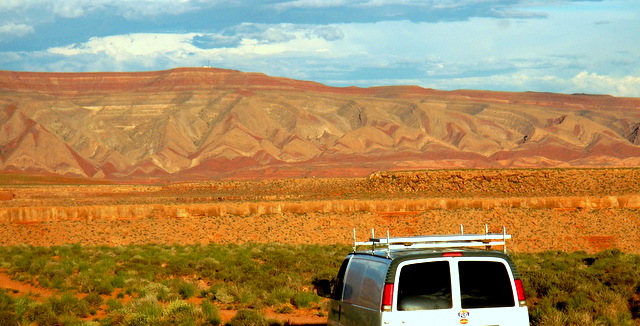 If I put the van in gear and let it go, it would come to the edge of the canyon and drop nearly straight down to the San Juan River below. I think I’ll NOT do that!