Searching For the Perfect Campsite

Searching For the Perfect Campsite 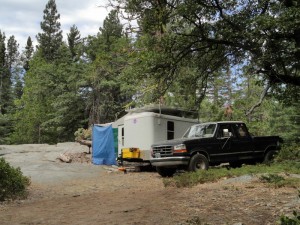 here’s my truck and trailer in the new camp, nestled in the Beautiful Sierra NF.

After the Rendezvous ended, Cheri and I wanted to go back up to our old campsite on the knoll because it was the perfect place to spend the summer. It was gorgeous and had internet and cell phone reception. As a bonus, the “road” into it is so poor that there would never be anyone camping near us. But that created a problem. Because no one ever used the road, it was getting overgrown with manzanita and every time we drove in and out our vehicles were getting scratched up. My old F150 is so beat-up I didn’t care, but Cheri really loves her van (which she lovingly calls “Hulk”) and so she was very afraid of scratching it. So we looked around in other parts of the Sierra National Forest and found a campsite we both loved. It was nearly perfect. It was open but surrounded by beautiful forest and of course it had an incredible view…BUT, no internet or cell phone. 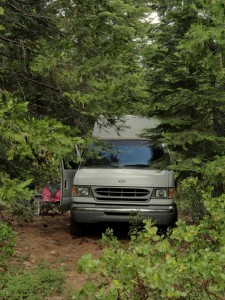 Here is Cheri’s van “Hulk” ticked into her little campsite. She likes the shade!

We decided to spend the summer their anyway because it was so nice. We were driving into town every other day to use the phone and internet, but we both found that pretty unacceptable. The trip into town ended taking up most of the afternoon and was it hard on the dogs.
So we were up visiting James and Kyndal (their Astro minivan is narrower and doesn’t get scratched up as bad) and we took another look for campsites. We found one that is just barely okay, but it has both internet and cell phone reception. As a huge bonus, we were a 10 minute walk from James and Kyndal. It was a tough decision, but we both decided that having internet in camp was worth it, so we’ve moved over there. Cheri is tucked into the woods so her van stays cool all day, and I am in the sun so I get plenty of solar power. It’s a good campsite, just not nearly as good as the last two we had. But it has internet, so we are glad we are here! 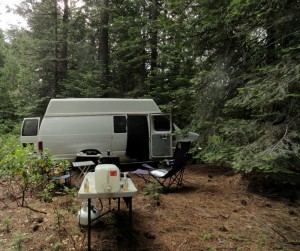 She actually has a nice clearing for her camp.

To get Hulk in, I took my saw and cut back the worst of the brush that was growing over the road. Then as she drove in I walked along beside her van and held back the rest of the brush that would have scratched it. We are just a short distance from the main road so it really wasn’t that hard. Normally being this close to the road would be a problem because it would bring traffic, but the main road is pretty poor so it doesn’t get much traffic, and very few people would look down our side-road and think they needed to go explore it. So far we haven’t had anybody else back here and I don’t expect we will.
Once again this raises the question of freedom versus comfort. We are free to go back here because we have small, not very comfortable rigs. I am expecting another friend to join us in August, but she has a 24 foot Travel Trailer and their is no way can it come back here. So she has much more comfort, but she also has much more limits in where she can go. We all have to set our own priorities and make our compromises. I’ve found her a great campsite a few miles away I think she will love, and then she can just drive up to see us.
So how did I find this place? First, I have a beat-up old pickup that can’t be damaged by overgrown roads, so I explore a lot. Second, I really like my privacy! The only way to get it is to head down bad roads other people won’t take. Third, I love to take my dog for long walks in the woods. So back when I was working as a campground host, Homer and I camped here on our days off and we walked all over the knoll. I’ve discovered nearly all my favorite places while we were out walking.
Bottom line: I think we finally have our campsite for the rest of the summer. It’s good to be home!!
I use a Verizon MIFI to get internet and the reception here is pretty good, but it could be faster. I’ve heard great things about Wilson cell signal amplifiers, but they are so expensive, I never bought one. Then a friend told me about one he used and liked so I bought it. It is the Wilson Sleek and works very well. But most importantly, it is reasonably priced at $84. I also bought a Wilson Trucker cell phone antenna and between the two I get a great signal. I’ve seen my cell phone go from 1 bar to 5 bars. You may want to check it out! Click here for info on the Sleek and here for info on the Wilson Trucker Antenna. Bob
Previous Photographs From the Wave and Area