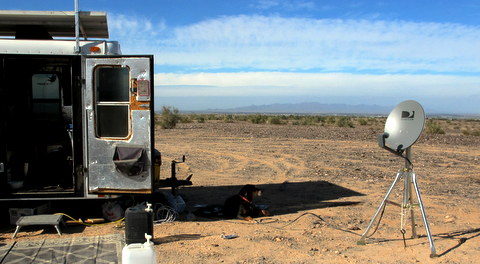 This is the tripod and dish in my camp. It comes apart easily and the tripod folds up to travel. Finding the satellite is easy.

As I told you in a previous post, I signed up for satellite TV, however, I haven’t told you how I liked it. There are two reasons I have been waiting: 1) I wanted to install solar power on the van so I knew how much power it would require and 2) I wanted to wait until I moved camp so I could set up the tripod alone. I installed the solar power system on the van a few weeks back and set up the tripod and satellite dish for the first time two nights ago. Now that I have that information, I’m ready to give you my feedback.
Do I Like Having TV? We’ve all heard it said, “150 channels and nothing to watch!” Well, there is a lot of truth in that. The great majority of stuff on TV is just fluff and not worth watching. But so far I haven’t had any problem finding something I wanted to watch. After we moved, it took me a couple of days to get around to setting up the tripod and dish, so I didn’t have TV. At the end of our first day in our new camp, I went into the trailer as usual to make some dinner; I automatically reached over to turn on the TV and remembered that the dish wasn’t set up and it wouldn’t work. I was very disappointed! That’s when I knew that I had made the right decision in getting the TV and I was really enjoying it. So, yes, I like it a lot. 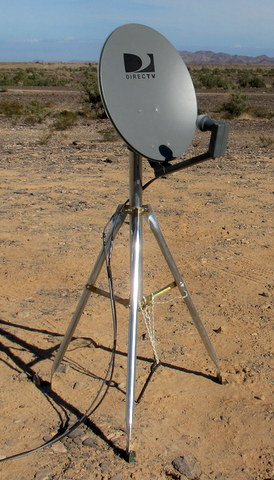 The dish mounted on it’s tripod and staked down.

How Much Power Does It take? This was a big concern of mine. Would I have enough solar power? The answer is yes. One thing you have to remember is that I am writing this on December 14, and it is only one week till December 21st, the shortest day of the year. That means I am getting the least amount of power out of my panels that I will get all year. At first I just used the 190 watts on the roof of my trailer and the two golf cart batteries inside it. I found the Satellite system took too much power and my batteries were going down too much at night. I think it would have been fine in the summer when there is full sun but right now it just wasn’t enough. I already had an extra 140 watt panel and had just been waiting to get to Quartzsite to install it, so I bought two golf cart batteries and installed the system on the van. I have an inverter in the van and run an extension cord from it to the trailer. The only thing running off it is the satellite TV. It has almost no effect on the batteries. Even after watching TV for 4-5 hours in the evening the batteries have never dropped below 12.5 overnight. So I have a total of 330 watts of solar and 4 golf cart batteries and that easily meets all my power needs, including the satellite TV with an abundance of power left over.
Who Do I Sign Up With? The first thing I had to do was decide how to get service. I had three choices: 1) Sign up over the internet, 2) Sign up with Best Buy who would give me a $150 Best Buy gift card just for signing up with them. 3) Sign up through a local dealer.
I had too many questions to even consider signing up over the internet. I am not a quick learner when it comes to electronic stuff so I wanted to deal with a person face-to-face. I seriously considered signing up with Best Buy so I could get the gift card, but I hate the learning curve of new things so I decided I would rather go through a local dealer who totally understood satellite on RVs and would hold my hand while I learned what was going on. If I lived in a house, it would not be an issue, but being mobile raises lots of little problems that very few dealers are familiar with or understand. So I decided to wait till I got here in Quartzsite and go to a dealer who specialized in RVs. I am so glad I did. The dealer I went through answered all my questions and when he came out and set up the tripod and dish he explained the process very clearly. He made it so clear that I was easily able to do it alone a few weeks later. This is the dealer I went through:

If you go to directTV.com and then to the RV page, (http://www.directv.com/DTVAPP/content/travelers/rvs?lpos=header) you will see they are the only dealer that DirectTV recognizes as a partner who specializes in RVs. They have branches in Yuma and Quartzsite, and travel around the country giving seminars. This isn’t just theory to them, they are full-time RVers themselves. When you go into the Quartzsite office, the owner will be there answering all your questions and her husband is the one who will come out and install your system. If you ever have a question or problem, they encourage you to call them (they answer in person!) instead of DirectTV because they know the right answer for RVers and DirectTV Customer Service probably doesn’t. They are the ones you want to get your system through!!!
Should I Sign Up With DirecTV or Dish? Once you contact a dealer, you have to decide who to get your service from, Direct TV or Dish. The dealer I went to made it clear that for RVers, DirectTV was far better. Their equipment was much better and finding the satellite with a tripod was much easier with them than with Dish. My philosophy is if I don’t know much about a subject, I find someone who does and who I can trust. I had complete confidence in this dealer, so I just followed her recommendations. I have been very happy with it so far! 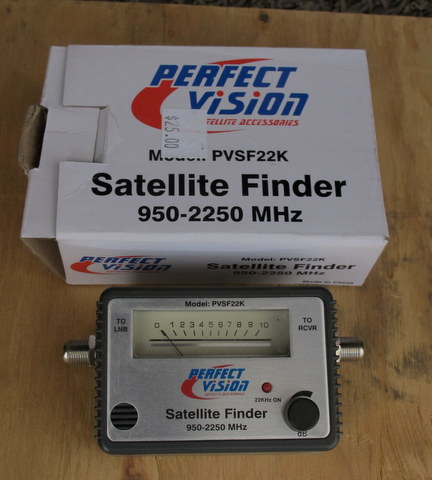 How Hard is it to Set up the Tripod and Find the Dish? This had been my greatest fear. I’d heard many stories that it was very hard to find the satellite and it could take many frustrating hours to finally get it. Nothing could be further from the truth! I won’t go into detail about how to do it, but the first time I did it alone it probably took me 15 minutes to get a great signal and next time I think it will take me even less. The reason it was so easy is that I didn’t get High Definition (HD) TV. The signal coming from the regular TV satellite is very broad and finding it is a breeze. The signal coming from the HD satellites is much narrower and much more difficult to find. If you really want the better picture that comes with HD, you may want an automatic, self-locating dish. With those, all you need to do is provide the dish with power and it searches for and locks-on the satellite all by itself, you don’t have to do anything. However, they are expensive, starting at $600 and going up. You can get cheaper ones, but they are poor quality, you want to buy a Winegard dish! 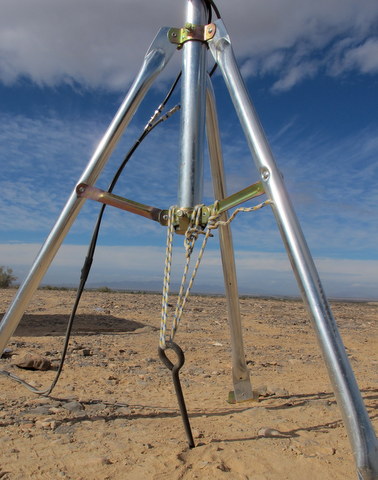 I was concerned about the strong desert winds blowing the dish over. In this picture you can see how I staked it down. That is a 2 foot stake I pounded into the ground under the tripod. There is only about 8 inches left above ground, so it is not going to be pulled up by any wind I can expect to face in the desert. I just tied the tripod on to the stake with some rope and then drove it a little further into the ground to take up the slack. Being somewhat anal, I also staked each foot down into the ground. Today we had some very strong gusts (we estimated them at 50 mph) and it didn’t even budge a little bit!

Can I Get Local Channels? Yes you can. But if you move a lot, it can be a hassle because you have to call Customer Service every time you move very far and have them switch you to a different local channel. I just moved 20 miles from Quartzsite, and I didn’t have to call because I am still in the area. If I move 120 miles though, I will have to call. If you only move that far a few times a year, you may just want to call every time. You just tell the Representative that you have moved to your summer or winter home and give them your zip code. But if you move a lot, it can become a problem. There is a solution though. DirectTV will let you pick a location to be your permanent local channel no matter where you are in the country. On the East coast that is New York, and on the West coast it is Los Angeles. I don’t want to have to call all the time so when I leave this area, I will set up L.A. as my permanent local channel. The beauty of signing up with a dealer who is also a full-time RVer is they understand these issues. So when I am ready to make L.A. my permanent local channel, I won’t call DirectTV, because the Representative probably won’t know what I am talking about, I will call the owner of Satellite Electronics Inc at 480-288-1111 and she will do it for me.
How Much Does it Cost? I have a two year contract and the first year it is $30 per month and the second year it jumps up to $55 per month. I wanted to be able to record programs, so I got the DVR which is an extra $8 a month. My total out-of-pocket expenses were $65: $40 for the tripod and $25 for a meter to help me find the satellite.
The bottom line is, if you are interested in living mobile, but have some favorite TV shows you don’t want to give up, you don’t have to. I think it is reasonably priced, easy to set-up, and money very well spent!! Bob
Previous How to Stay in Touch
Next TechNomadia visits the RTR & a Review of Their Smartphone App: US Public Lands