A Quick Trip to Algodones, Mexico for Dental Implants: Review of Dr Rubio

A Quick Trip to Algodones, Mexico for Dental Implants: Review of Dr Rubio 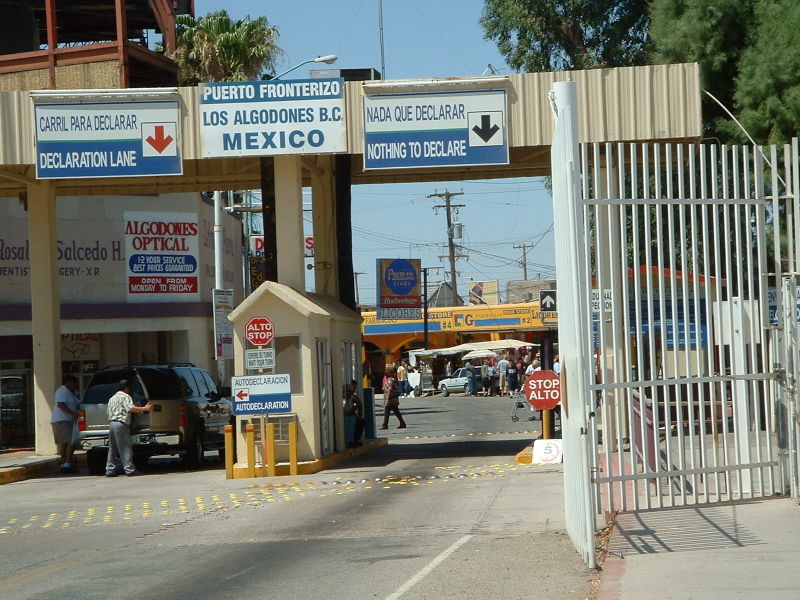 The border crossing into Algodones.

One question every vandweller has to answer is what they are going to do about health care. I’ve said many times that for now I am not doing anything about it. I have what a I call a .357 plan. When my health gets so bad that I can’t go on living the way I do now, I’ll take my .357 far out into the desert and use the .357 on myself. Problem solved. Until then, I’m just hoping my body holds out okay. But what about dental care? The quality of our teeth has a profound effect on the quality of our lives.
As I get older, a lifetime of bad habits are catching up with me and I am having more-and-more dental problems. For example, last summer the crown on one of my back teeth came off and I went to a dentist in Flagstaff, AZ to get it glued back on. He said at that time that both of my rear lower molars were in such bad shape they needed to be removed and implants put in. The reason I had to get implants was that three years ago the two top, rear molars had been extracted and that without these two molars, I didn’t have any molars left to chew with. He quoted me a cost of $12,500 to do the two extractions and put in two implants. That’s a lot of money!! Money I didn’t have. What was I going to do?
I’ve been going to Algodones, Mexico for many years now to get my prescription medications, dental work and eyeglasses. So I knew I could get the implants for a lot less there. Recently, the time has finally come to get the work done, so last Monday (12-16-2013) I drove down to Yuma, AZ and camped on the California side of the Colorado River near Algodones. On Tuesday I saw my dentist Dr, Rubio http://dentalrubio.com/ and on Wednesday I got the dental work done. After the appointment I did some shopping at Walmart in Yuma and then drove home.
So you can see it was just a quick trip, but that’s the beauty of living in a van and being a Snowbird. By camping in Arizona every winter, it’s so close to the Mexico border I can run down there in an afternoon. If I have a dental problem, I’m only 2 hours from the cheapest possible dental work (it’s only 100 miles from my camp in Ehrenberg and then another 10 miles to Algodones). Most people find that the full cost of dental work in Algodones is less than their co-pay—for those few people with dental insurance.
You may be thinking, “But do you get good dental care?” The answer is 100% a resounding “Yes!!” If I blindfolded you and took you into my Mexican Dentists office (and then took off the blindfold) and you got your teeth worked on, you couldn’t tell any difference from there and any Dentist’s office anywhere in America. It is totally clean, modern, professional and very high-tech. The only tip-off that you are in Mexico is that the employees are all Hispanic and speak Spanish to each other–but they all speak English to you, including the dentist.

My good friend Randy Vinning http://mobilecodgers.blogspot.com/ has been going to Dr. Rubio for decades and highly recommends him, so when I needed two teeth extracted and two implants, there was no question that I would go to him. I’m very glad I did!
Dr. Rubio suggested that I get two implants but instead of both of them on one side he said I should get one implant on each side so I could have balance in my chewing. He thought that would be better for my teeth in the long run. If I later decided I needed them all, I could always get implants in the two missing teeth anytime in the future. That sounded like a much better plan than the American Dentists idea so I agreed to do that.

If you aren’t familiar with implants they are a modern miracle of dental science! Essentially (and very oversimplified) a new tooth is bolted into your bone and becomes like a natural tooth. I know that sounds awful but it’s actually quite simple and very little pain is involved, but it does take some time. First I’ll tell you about the work on the right side because it was very simple. The bone on that side (where I had a molar removed a few years ago) was in good shape so he could do the implant the next day. He began by taking a casting of my mouth so he could make the crown later on. The he drilled into my jawbone and placed a small post made of titanium into the bone socket of where the tooth used to be. I know that sounds gruesome but it was no big deal at all and basically painless. As the jawbone heals, it grows around the implanted post, anchoring it securely in the jaw just like I was born with it. He said it would take about 3-4 months to heal and then I would come back for the second step of the process.
In three months, after it has healed, I’ll go back and a small connector post — called an abutment — is attached to the post to securely hold the new tooth. After that there is another two week break for that surgery to heal. As it is healing, he makes the crown and after it has healed I go back and the crown is attached to the abutment. Viola, a new, perfect tooth that should last me the rest of my life!
The second implant on the left side of my mouth was a little more complicated. He had to extract those two teeth, but there was too much bone loss in it to firmly hold the post. So after the extraction he did a bone graft which will heal and grow into solid bone just like I was born with it—leaving me with enough bone to hold the post. That will also take 3-4 months to heal. So when I go back to get the abutment put in on the right, he will place the titanium post into the bone for the implant on the left. Then four months after that he can put the second abutment and crown on.
Now for the all-important question, how much will all that cost and how much did I save by getting it done in Mexico?
Remember, I said the Flagstaff Dentist quoted $12,500 for two extractions and two implants. In Algodones the same thing will cost me $3890. Less than 1/3 the price! Not only that but I think Dr. Rubio gave me better advice about putting an implant on both sides instead of both on one side. It just makes sense chewing 100% of the time on one side of your mouth has to be a bad idea in the long run.
If you are looking for inexpensive, high-quality Dental care, I highly recommend Dr.Rubio! You can get it done cheaper in other offices in Algodones, but I prefer to pay a little more for the very best.  Here ia a map to his office and below that is a Satellite view.  To make an appointment or contact him: 928-255-0897   http://dentalrubio.com/index.php 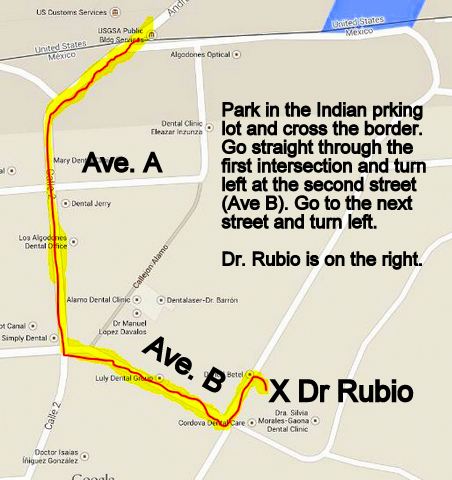 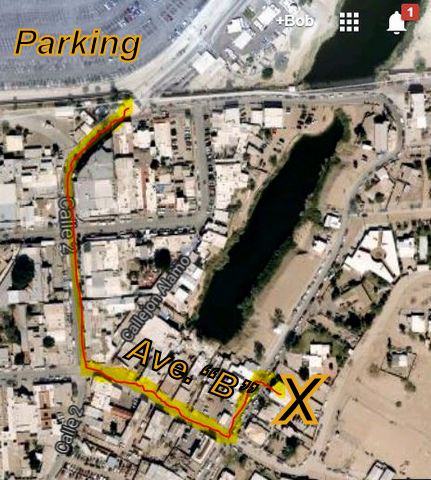 A satellite view of his office.

Previous A Cure for Depression
Next Annual Quick Trip to Algodones, Mexico