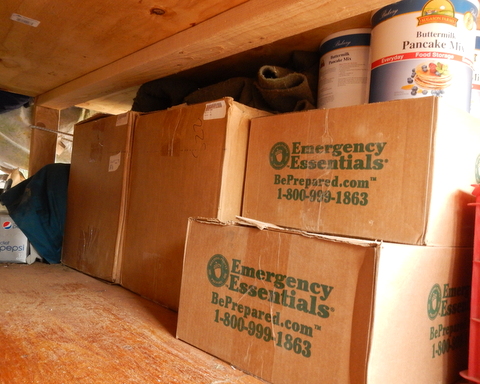 (I’m posting this on March 26, 2014 and at this time every year my mind and heart turn to the single strongest memory I have from my childhood: The Good Friday Earthquake in Alaska on March 27,1964 (9.2 on the Richter scale) which was the second largest earthquake in the last 1000 years. The End of The World As We Know It (TEOTWAWKI) isn’t a theory for me, I’ve experienced it.)
In today’s post we are going to continue looking at living prepared for the unknown. I’ve laid out what I think are intrinsic problems in our world that I believe have a realistic possibility of causing some really terrible problems: Peak Oil, Global Climate Change and Peak Debt. I believe they are very real and serious problems. Any one of them makes the future extremely uncertain but when combined they feed each other and create the “Perfect Storm” of conditions that I believe will bring about the “Perfect Global Crisis.” Fortunately, I believe it will build slowly over a period of time but eventually it will make the Great Depression look like an afternoon in the park.
We vandwellers are in a unique situation to be prepared for the coming storm by taking some easy steps right now. Today we’re going to look at my example of what I’m doing to build up an Emergency Preparedness Pantry. The first thing I did was decide I needed both a Short Term and a Long Term emergency pantry. Short Term foods are those with a short lifespan, usually 1-3 years. Long Term foods are those that are packaged in such a way that will last 10-30 year. For example, rice, flour, beans and pancake mix are all considered staples of an emergency pantry but if you go to the store and buy them in small packages and throw them in a corner of the van they won’t last much more than 3 years before they go stale or get infested with bugs. So they are short term foods until you either buy them  packaged in a way that lets them last 10-30 years or you repackage them. Then they become long-term food. 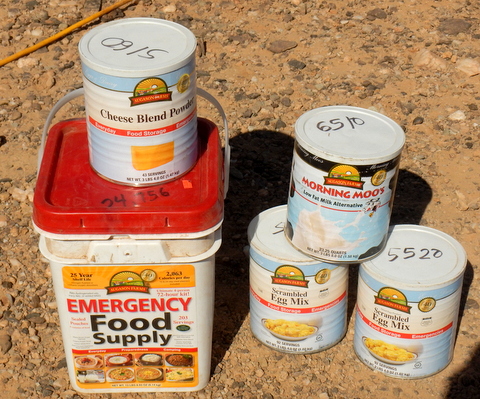 I bought this survival food (with a 10-20 year shelf life) from Walmart and other stores about 2 years ago but because of inflation it has since gone up in price by half again. In 5 years I believe it will have doubled or tripled in price. It’s a great hedge against inflation!! I can’t remember for sure but I think it cost about $150 total.

One other way that Long Term foods differ is they are often either freeze dried or dehydrated. That has several advantage for us vandwellers:

But freeze dried or dehydrated foods also have several disadvantages:

No two of us will have the same emergency pantry because our tastes and commitment to (and opinions of) healthy eating is totally different. A raw food eater or vegans pantry will look very different from a low-carb devotee. The key is I think we’re all going to have to make some compromises in our eating habits in order to have an emergency pantry. Fresh and raw food simply will no longer be available and unless you have a lot of money to pay for the best freeze-dried foods it will be very difficult to keep eating the same way. The goal of an emergency pantry is get you through an emergency until you can get back to some kind of normal eating. So I think it doesn’t need to be the healthiest of eating because it’s just for a short time. Hopefully the emergency is short term and things will get back to normal, but if they don’t you need to have a backup plan. I can see two options: 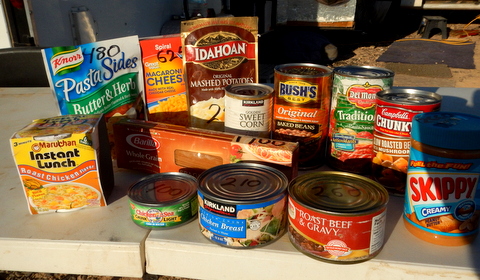 These short term foods should be your first line of defense against emergencies. They’re cheap to buy, go on sale often, store reasonably well, require little or no cooking and are tasty.

I have to admit I don’t eat very healthily; I’m addicted to the convenience and taste of the typical American prepared food diet. In the long run I’ll pay for that with more health problems but I guess I’ll just have to accept that. On the other hand, it makes it very easy to build up an emergency pantry because prepared foods store very well.
MRE: A Hybrid Food–Some people love Meals Ready to Eat (MRE) because they are just like regular food, but they are packaged to last up to 10 years. They are standard issue rations for the military so they are a proven product but they are expensive, heavy and bulky, so I’ve not stored any. I prefer to have either cheap short term or expensive but light long term foods, not something in-between. But having a few on hand is a good idea.
MRE Meals Standard 12 Case with Heaters (Meal Ready to Eat – Military Type)

My guess is that most of you eat something like I do and building up a short term emergency pantry is no more difficult than buying some extras of what you eat now. The typical American diet is full of canned, packaged and prepared foods that will last on the shelves of our van for 1-3 years. To have a short term emergency supply all you need to do is watch for sale prices on the foods you’re eating now and buy extra. That has several advantages:

Here is a table of foods you might consider: 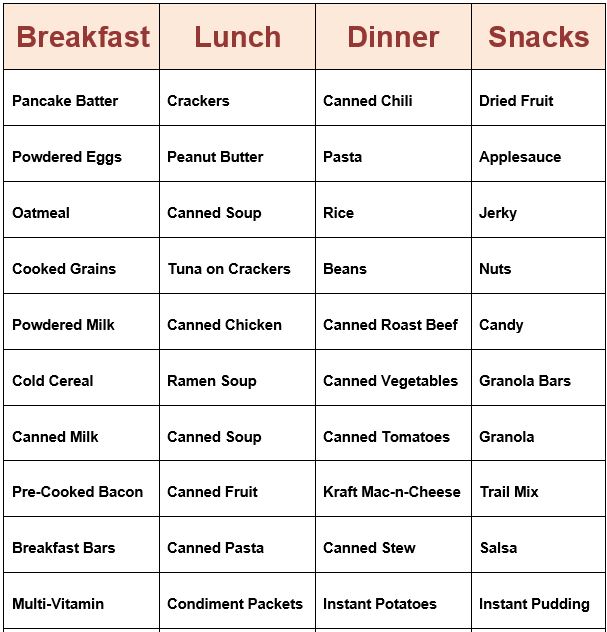 Here is a list of foods to fill your food pantry with. Most of them have fairly long shelf lives but they all must be rotated by FIFO. None of them require refrigeration so it will make make a good meal planner if you are foregoing a cooler.

The problem is that it’s heavy and bulky and most of us can’t keep 3-6 months supply of it in the small space of a van. Beyond that, because of its limited shelf life I find it very difficult to eat it before it goes bad. What I need is food that 1) is packaged to last 10-30 years so I can store it and forget it and 2) it also needs to be light and compact so I can fit it in a small space and won’t eat up a bunch of gas because of the extra weight. Fortunately, that describes most freeze dried or dehydrated foods perfectly. Therefore the majority of my emergency food pantry is composed of them
Chef’s Banquet 30 Day Food Supply in a Bucket 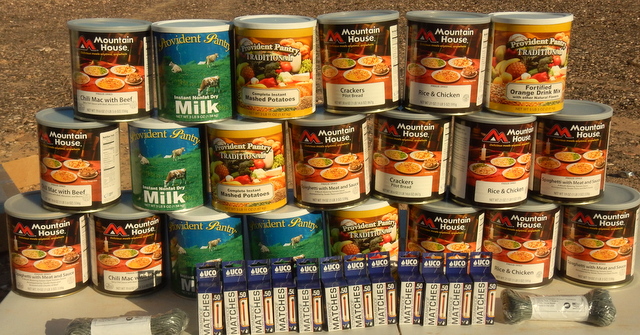 This is about $350 worth of freeze dried foods and will feed you for around 3 months. I also stocked up on waterproof matches to cook with and to barter for more food with.

When I was a young man in the 70s and 80s backpacking was just becoming the huge fad it was to become and there was an explosion of innovative and high quality gear for backpackers. Living in Alaska I fell in love with backpacking and did it every chance I got during the summer. One of the new innovations was Mountain House freeze dried food that only needed boiling water to prepare. But more importantly to me as a backpacker was it weighed almost nothing and took up a tiny amount of space. Over the course of the many years I backpacked I tried virtually all of the flavors and liked almost all of them. So when it came time to build an emergency pantry it was an easy decision what I would buy—Mountain House.
Click Here for Mountain House products from Amazon.com 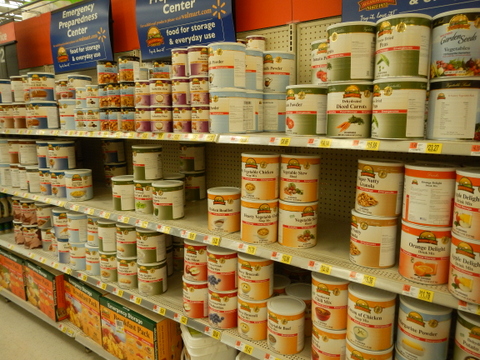 A few Walmarts are selling the Augason Farms brand of freeze dried and dehydrated foods. They are the cheapest I’ve found anywhere. Not all stores have it but you should be able to order it from their website and have it delivered to your local store for free.

The individual meals are too expensive to store up so I’ve been buying the #10 cans. They are also expensive but I found them on sale here http://beprepared.com/#default and stocked up on all I could afford. They also had the Provident Pantry brand on sale so I stocked up on some of them as well. Walmart is selling a different brand in some (but not all) of their stores at really good prices so I’ve been buying them as well. I know the Mountain House brand tastes great but the others are just shots in the dark. But I’m assuming that in bad times I’ll be so grateful for anything to eat that I’ll gladly eat them. Here is a list of the foods I’ve stored: 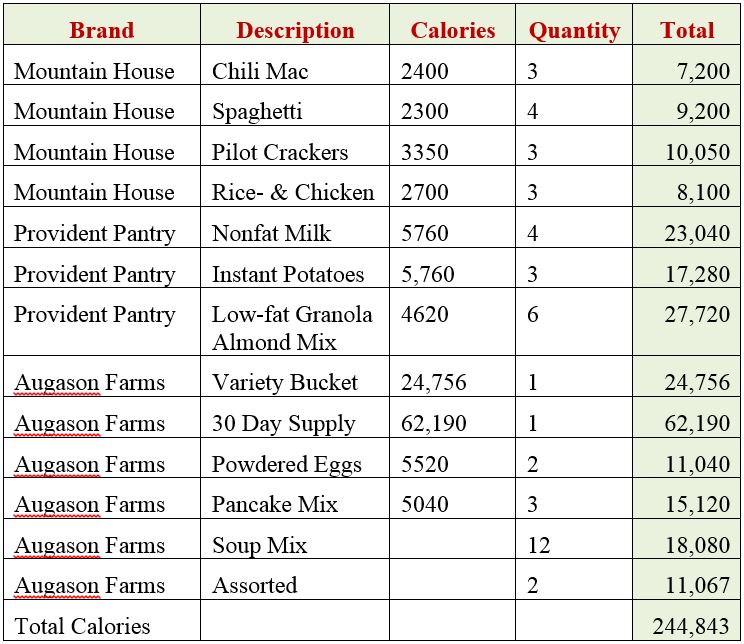 This is 6 months supply (182 days) of food at 1350 calories a day. It isn’t a well balanced diet but it will keep me alive and my energy level up. It also requires the minimum amount of cooking and fuel.

As you can see the total calories are 244,843 which is about 1350 calories a day for 182 days or enough to live on for 6 months. It cost around $900. Your first thought might be, “I can’t afford to spend that much!” But bear in mind that is only $150 a month which is actually very cheap! And you don’t have to go out and buy it all tomorrow, you just have to buy a little bit every month (you’re spending the first 10% of each check on yourself, right!).  I started building up my supply two years ago which means I averaged spending $38 a month to build up a 6 month supply of freeze dried foods.
Augason Farms Emergency Food Storage Kit – 30 day – 1 person

Notice that I bought many things that require no cooking like Pilot Crackers, Granola, Orange Drink (for the vitamin C– I forgot to list it in the table) and powdered milk.   I can put a few scoops in water and drink it and munch on the crackers or granola and eat on the move or while I’m hunting or working.  Things like the eggs and pancakes give me variety and require a minimum of fuel to cook. I can make pancakes in the morning and carry them and munch on them through the day or make sandwiches with them like bread. All the meals only require adding boiling water and stirring and then waiting till they re-hydrate.
Click Here for Augason Farms from Amazon.com

You may not have the as much extra room or disposable income for 6 months supply, but I’m sure you have  enough to get started on a month of two supply. I highly recommend you do that!