There haven’t been too many travel  posts lately but this is one I must put up! Chances are many of you will never have heard of the Alabama Hills and will have no idea what or where they are. I certainly had never heard of them before but I make it a point to study Photography Guide books that tell you where the pretties and most photographic places in the country are. Being pretty does not mean it’s photogenic! It takes a special set of qualities to make something work as a spectacular photo, and that’s why so many pictures are taken of the same places!

My campsite along with a friend. Don’t vans just look natural in that setting, like we belonged there! 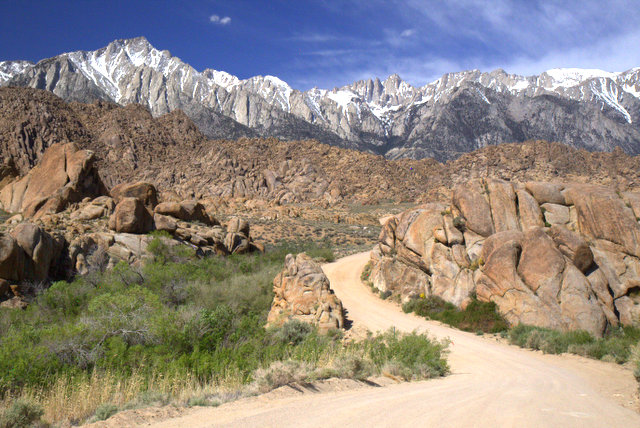 Movie Road through a wash. This is one of the few green places.

What’s so spectacular about them is that you have the very tall and gorgeous Eastern Sierras  rising like a monolithic wall above the desert floor around Lone Pine, CA. The highest peak in the lower 48 is among them, Mt Whitney and its eastern face looking down on Lone Pine is gorgeous! 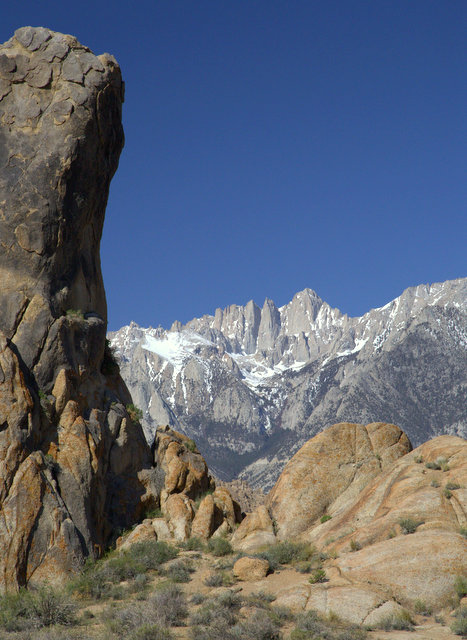 It’s hard to describe the Alabama Hills themselves; it’s like a giant took these huge, long boulders and piled them in a giant piles directly in front of the  snow-capped Sierras as the perfect foreground for a photo! It really is stunning! 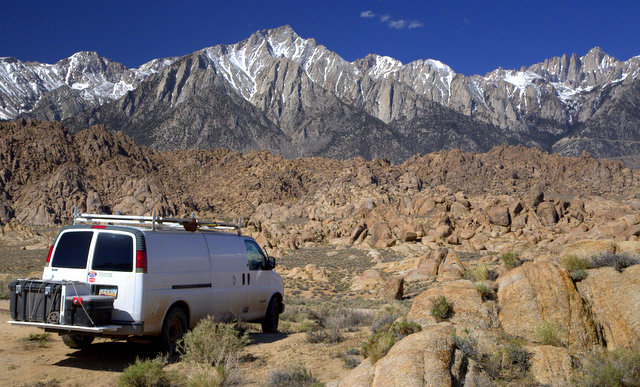 The mountain that dominates in the middle is Lone Pine Peak, it’s only 12,000 feet. Mt Whitney is to the far right. It’s further away so it looks smaller. It’s the tallest mountain in the Lower 48 at 14, 505 feet.

My favorite time to be there is in the Spring when different wildflowers are in bloom, My favorite is Paintbrush when the fire engine red is such a contrast against the brown desert and snow-capped peaks against the blue sky, but I missed that this year. 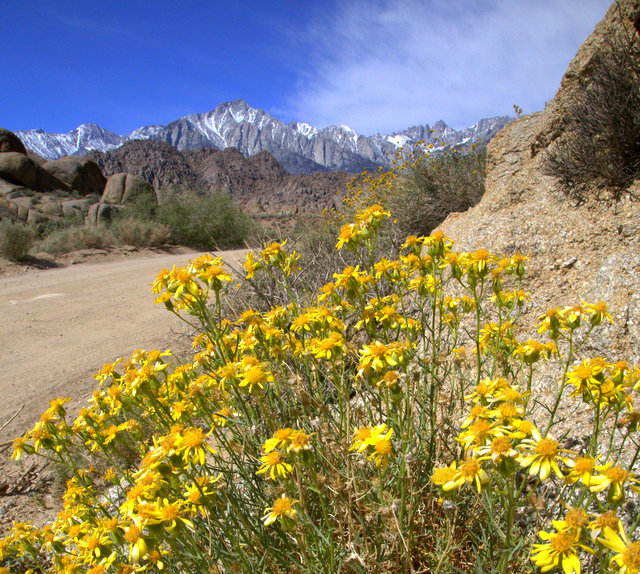 I missed that this year but there were some yellow flowers in bloom and of course cactus with their brilliant red display–you can’t go wrong with cactus in bloom! 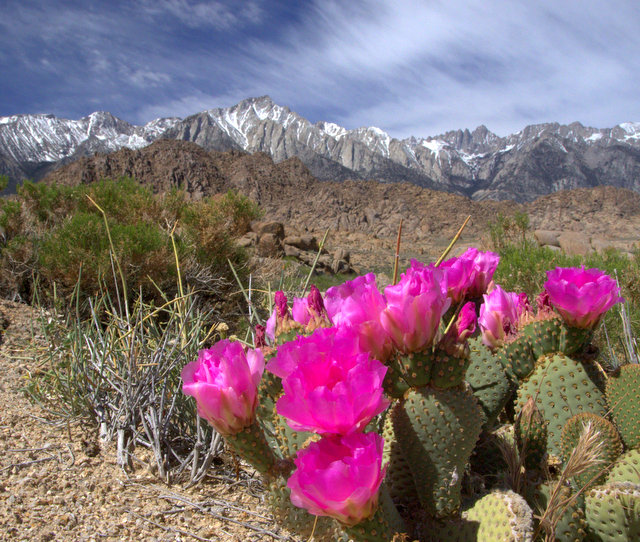 The Alabama Hills themselves are managed by the BLM and there is a huge amount of land available for free dispersed camping. As you can see in the pictures, there were rigs scattered everywhere around the area. 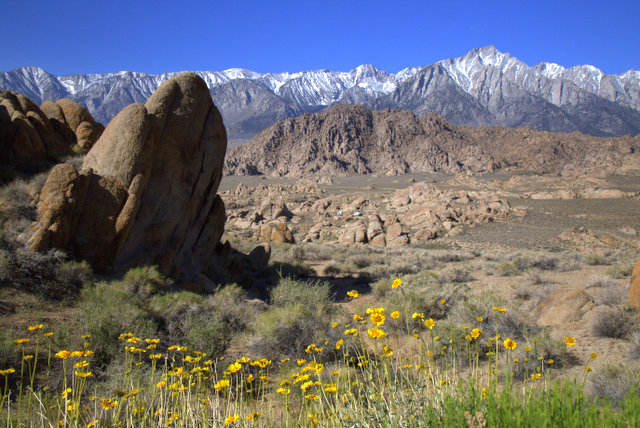 There are two tiny white dots in the center of the picture, those are RVs camping.

Because of its stunning beauty, over 300 movies have been shot here. At the Inter-agency Ranger Office (National Park Service, National Forest and BLM) just a little south of Lone Pine you can pick up a map that shows where every film was shot–there is also a museum in Lone Pine dedicated to the many movies shot in the area. 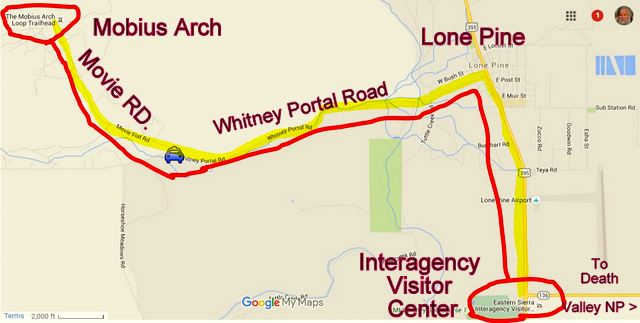 Most of the movies were shot along what is now called Movie Road where there is also the most free camping, fortunately it is also the prettiest area! To get to it you start at the only traffic light in Lone Pine and turn west toward the mountains on Whitney Portal Road. Drive up it for  a ways until you see Movie Road pulling off to the right. Drive down it until you see a campsite or a photograph you like, it won’t take long! Sadly, there is no internet or cell service there, you’ll have to go into town whenever you need that. 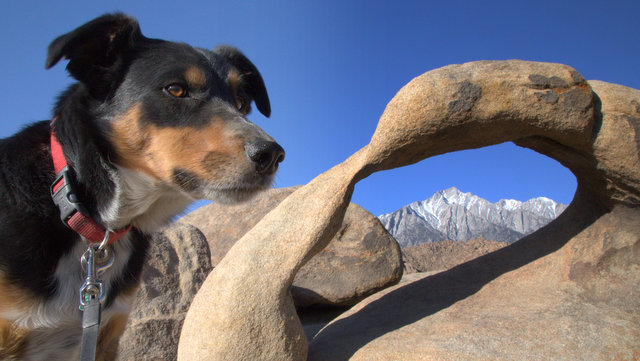 One of the more interesting things in the Alabama Hills are the many arches formed by the constant wind! By far the prettiest and most photogenic is Mobius Arch. Every time I’m there I take another shot of it and I’m never disappointed by it! This time Cody was willing to pose with it–which was very cool! You can get a map at the Inter-agency Center that has all the arches on it, some are nearly as good as Mobius and worth searching for. 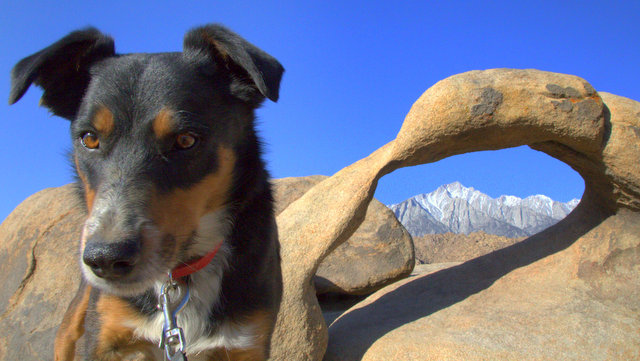 As gorgeous as the Alabama Hills are, they aren’t the most beautiful thing in the area! If you continue the drive north on Highway 395 on the East side of the Sierras in California, you’ll come to an incredible and varied amount of stunning natural beauty!

I hope you’ve been inspired by these photos to consider making the Alabama Hills a destination sometime soon, I think you’ll be very glad you did!!