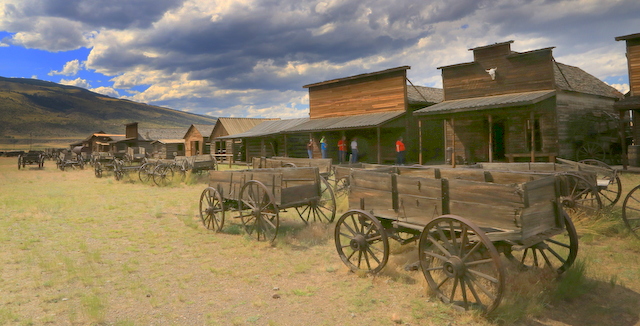 Cody Wyoming is a very nice little town that is plumb full of history. Of course the oldest history is of the Native Americans who lived here for thousands of years, but after them  came Lewis and Clark, the Mountain Men, pioneers, miners, cowboys, ranchers and settlers. Of course at the center of much of it is William, “Buffalo Bill,” Cody who founded the town in 1896. His name is everywhere in and around the town, most prominently at the Buffalo Bill Center of the West (http://centerofthewest.org/).  I’ll talk about that in a later post. In this post I want to tell you about the other major tourist attraction in Cody, Old Trail Town. 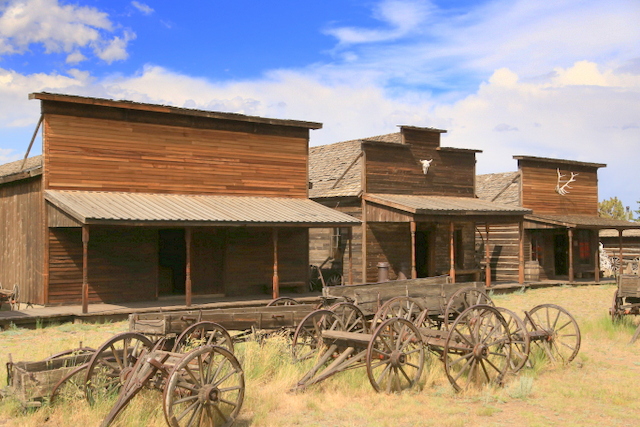 Old Trail Town is a collection of buildings built by the early pioneers to the area around Cody during the late 1800s, get more information here: http://www.oldtrailtown.org/. To create the museum, they were dismantled from their old locations and brought here and reassembled piece by piece at the exact location that Buffalo Bill founded the town of Cody. Just the empty buildings wouldn’t be very interesting, so many of them are also filled with antiques from the area and time period. Whenever possible, there are photos of the actual owners of the buildings. For example, they have Curley’s cabin, who was Custer’s head Indian Scout and who survived the battle of Little Big Horn. But they have much more than just the building, inside are many photos of him and even Custer and antiques from the time period. Together, you get a very good feel for how people were actually living at the time. 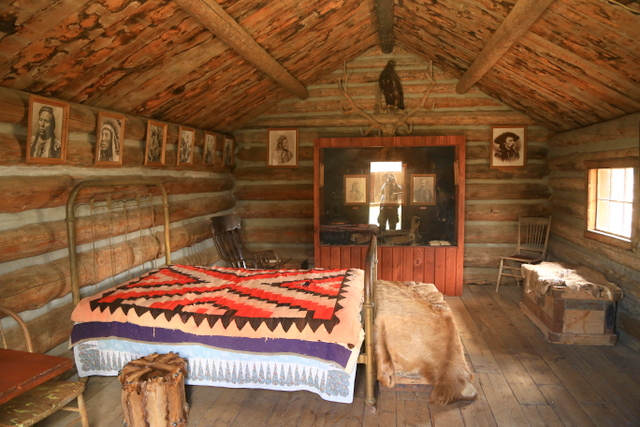 The cabin Curley lived in after the end of the Indian Wars.

Another aspect of Old Trail Town is a small graveyard with a few historical figures from the 1800s. Their graves were exhumed and their remains brought here and re-buried. The most famous is mountain man John Johnson who was the model for the 1972 movie “Jeremiah Johnson” in which Robert Redford portrayed his life. I found the small graveyard oddly emotional when you thought of the men and women who lived and died in this very country and their bones were buried right there, just a few feet away from you. You can get more information on who’s buried there at his page: http://www.oldtrailtown.org/gravesites/ 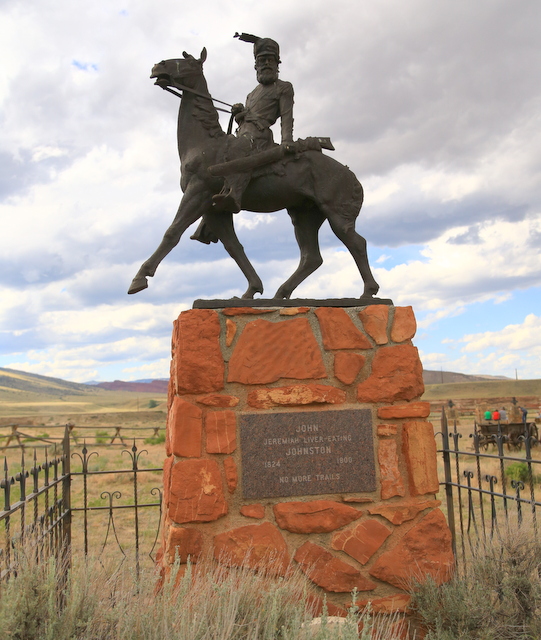 The grave of the real “Jeremiah Johnson”, mountain man. 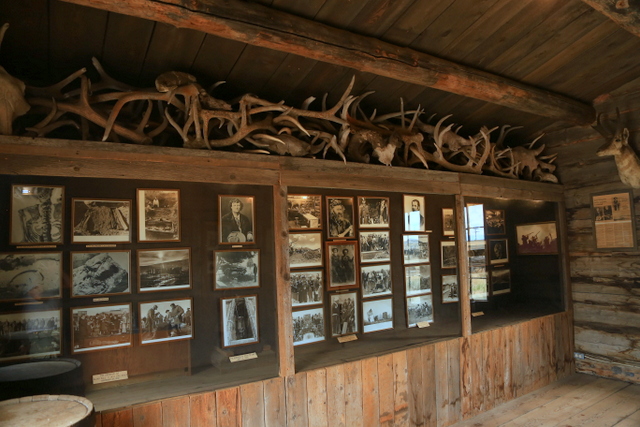 This cabin was used as a museum and on its walls are the obituaries of all the people buried in the graveyard. It also includes newspaper articles from their time and also new ones from when their bodies were exhumed and moved to Old Trail Town. There are personal articles and several letters written by the people in the graves.

It costs $9 to go through the town and it was well worth it to me. I love the history of the Old West and feel a strong affinity for the Native Americans, Mountain Men and cowboys who lived it. I tremendously enjoyed going through Old Trail Town and being transported back in time to an era I regret missing. I’ve always thought I was born at the wrong time!  Highly recommended!

To Support this Site, Use This Link to Shop at Amazon:

Click Here to Shop at Amazon. I’ll Make a Small Amount on all Your Purchases and it Won’t Cost you Anything. 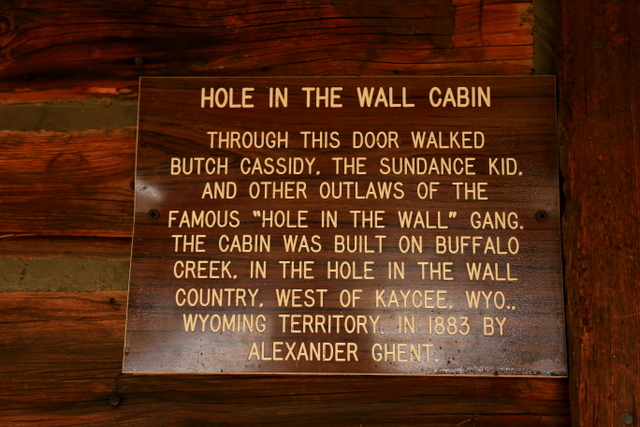 Butch Cassidy spent a lot of time in this part of Wyoming and committed numerous crimes in the area. He is known to have used this cabin as a hideout. 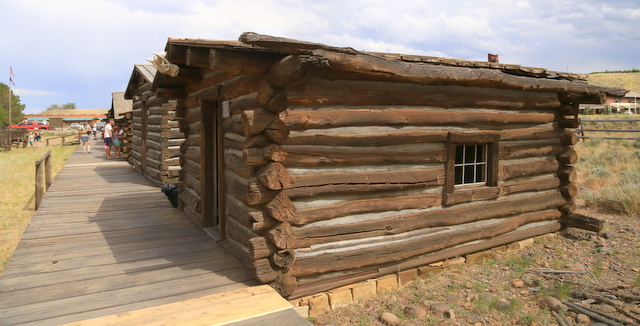 The cabin Butch Cassidy and his gang hid out in. All these building give you a real sense of respect for the durability of log buildings! Nearly all of them were built 120 years ago, or even more. 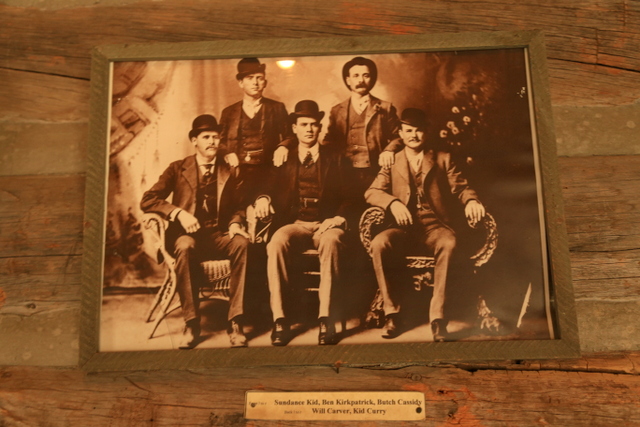 One of the many authentic photos and items from Butch Cassidy’s cabin. 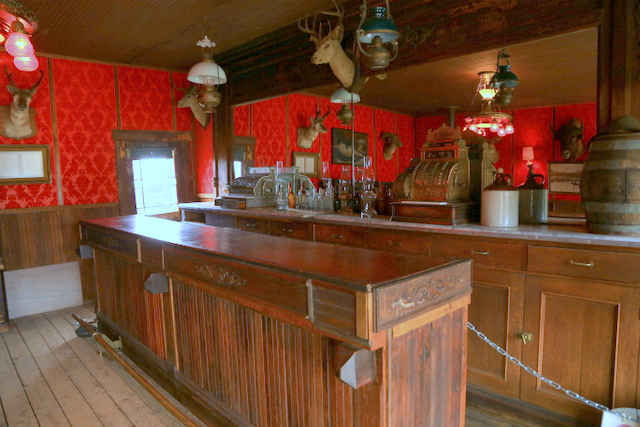 A real saloon from the late 1800s Wyoming, moved piece-by-piece to Old Trail Town. Yes, it has swinging doors with real bullet holes. 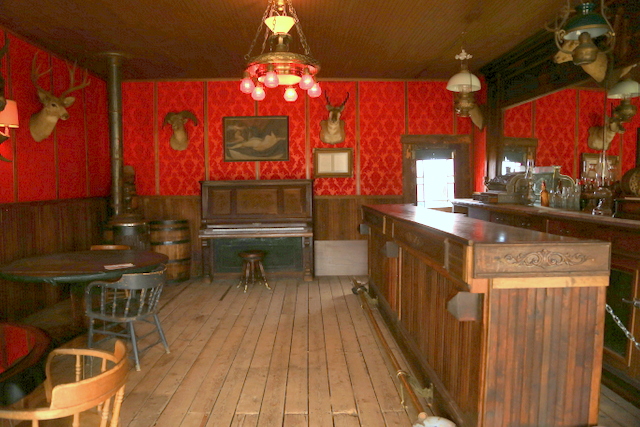 Rather than tell you all about the buildings that are there, I think pictures tell the story much better than I can, so I’ll let the photos tell the story. 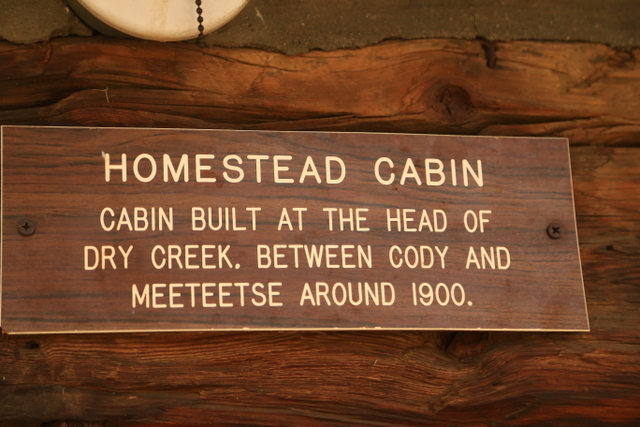 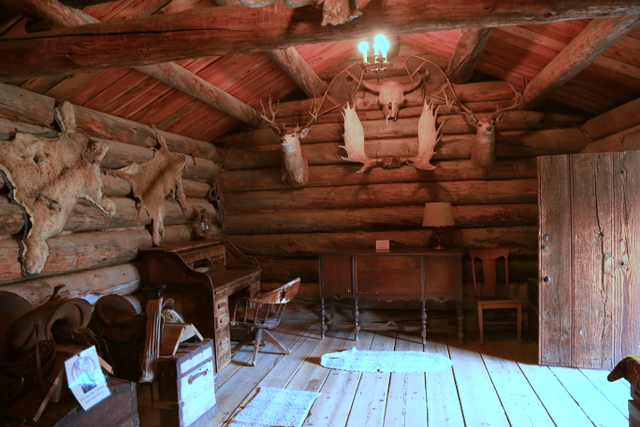 The Homestead cabin left side. 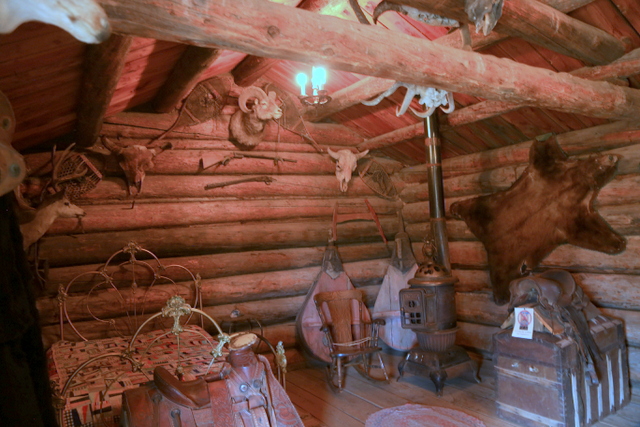 The Homestead Cabin, right side.

I have many more photos of very interesting buildings and antiques, but I can’t possibly put them all in one post. If you want to get a real feel for the amazing history that you get to see and touch in Old Trail Town, you have to go there for yourself! 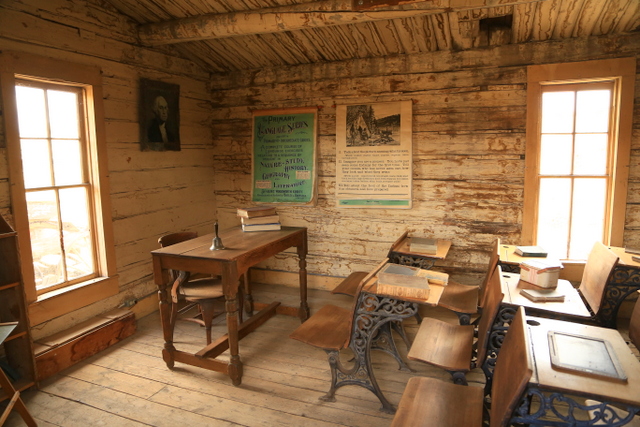 An authentic one-room school house from 1884. 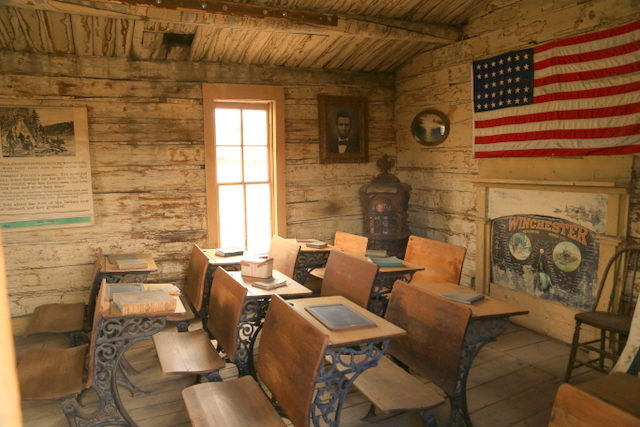 All the pieces in the school are authentic to the time period.

Information about the cabin the school was in. 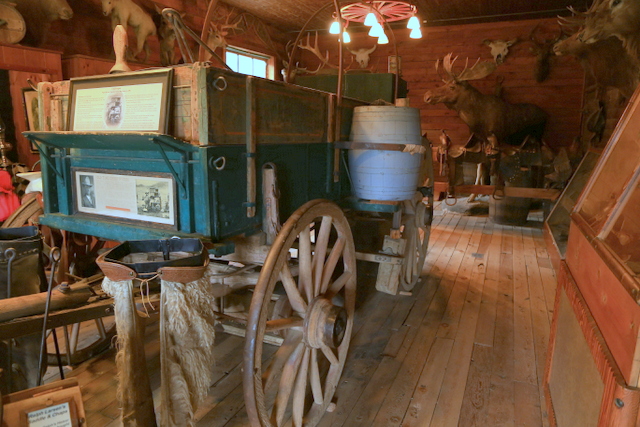 This is an authentic “chuck wagon” actually used on cattle drives in the 1890s. The same heart that longed for adventure and travel that compelled them to hit the trail still beats in the readers of this blog! 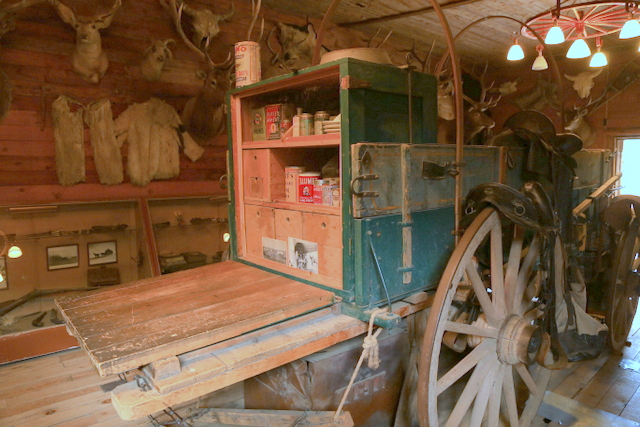 The back end of the chuck wagon. I can see many similarities between this and a vandweller! Can’t you?

Previous Moab, Utah Campsite
Next Overview of Full-timing in Oregon