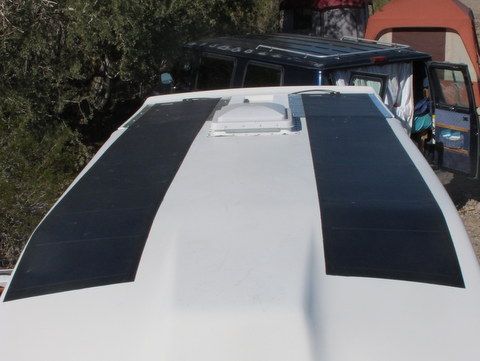 Here the flexible panels are after we finished mounting them. You can see the roof vent in the center. There is a curve at the front of the van where the roof angles down. The panels are flexible so they conform to it.

I  believe high-top conversion vans are about the ideal vehicle to live in. They are abundantly available and often at very reasonable prices; they offer a lot of room and the extra height makes them much more comfortable. They have slightly less stealth than other vans, but the difference is very small; so little in fact I don’t think it is an issue. They may also have slightly reduced mpg, but often the difference is very minor. My girlfriend, Terry, lives in a high-top Chevy conversion van and has been stealth parking in Long Beach, CA for a long time. She has never had a problem with being hassled while sleeping. If you are careful any reasonably stealth van should have all the stealth you need. She also gets around 20 mpg on the highway, so the high-top has very little impact on her mpg. 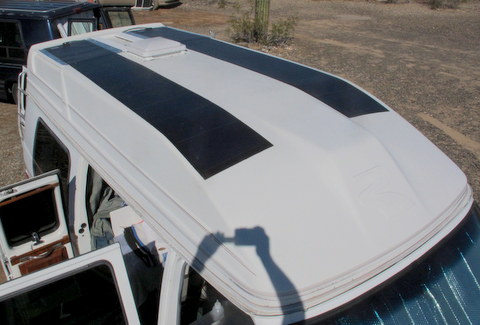 Here you get a better idea of how convoluted the roof is. The whole center area forward of the vent is higher than the rest of the roof and it all angles slightly down to the outside, making it hard to mount fixed solar panels.

She loves her van but it has one problem: the high-top makes it very difficult to mount a solar panel! The majority of fiberglass roofs have several convolutions and often things that stick out of the roof . Terry’s has a vent right in the middle of the roof, many curves, and a low area in the back for a luggage rack. Those things combine to make it impossible to find a space large enough to mount a solar panel. Actually it could be done by custom fabricating different sized feet and mounting the panel high enough in the air to clear the obstructions, but it would be ugly and noticeable, two things that are very bad for stealth and the extra height might cut her mpg. It would also mean drilling holes through the fiberglass roof and reinforcing the roof to be sure the bolts couldn’t pull through. 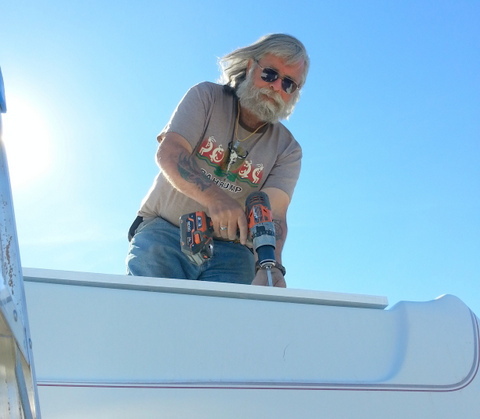 Here I am screwing down the sheet metal onto the plywood. You get an idea of the dip the roof took in the back for the luggage rack. The plywood filled it in and made it level.

We decided the easiest and most practical solution was to use flexible Unisolar Solar Panels. I have worked with them before and liked them and knew they would conform to the curve of her roof. They come in different sizes but we had to get the 68 watt panels because the others were all too long. I suggest most people will be happy with about 135 watts of panels so we bought two of them. They are only 16 inches wide so we could lay one on each side of the van with the roof vent between them. They are also self-sticking; you just peel off the protective backing and lay the glue down on the roof and they bond to it. My research showed that it was an extremely good glue that would not come off. In fact one of the biggest complaints about it was that it would never come off. So if she sold the van, there was no taking the panels off and moving it to the new van. We decided that was okay because she plans on keeping the van for a very long time.

We had one obstacle to overcome. The roof had a low-area in back where the roof racks were to hold cargo. I was sure that the solar panels were not flexible enough to conform to the nearly square drop of the roof. That would leave a gap between the panels and roof where water and dust could get in and my concern was that over a period of time the glue would slowly un-stick and as it did the flapping would eventually pull the whole panel off. I didn’t want to risk that so we decided to fill in the gap and make it level. We measured it and found out the drop was exactly 3/4 of an inch. So we decided to buy a sheet of plywood and cut it to fit and screw it into the roof. We knew the sun and weather would quickly destroy the plywood so we painted it white with several coats of good paint first. So once it dried we screwed it sown and used plenty of caulk to make sure water couldn’t get in through the screws.  I didn’t know how the glue would adhere to the painted wood, so we decided to put a piece of sheet metal on top of the wood using sheet-metal screws. The metal was a roll of flashing designed for roofs. All of this is readily available at any hardware store. 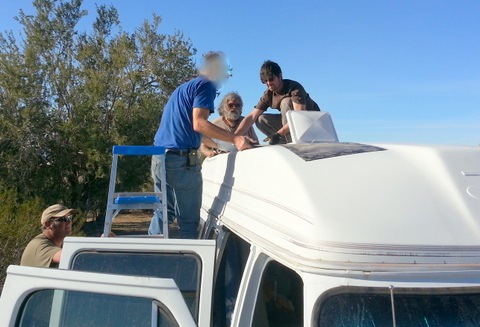 Here we unpeeled the backing to glue the panel down. That’s Bryce holding the ladder, Don standing on the ladder, me in the back, and Brian on the right. We did this at the RTR and I was so busy I was getting overwhelmed. A huge thank you to them all for staying and seeing the project done after I was called away!!

Next we washed the roof extremely well with TSP a cleaner designed to cut grease and grime. After it was totally dry we stuck the panels on. We put the junction box at the back and started there. It was a very simple process. My good friend Brian and I worked together on it. We started peeling the backing and Brian went ahead peeling it back and holding the panel up so it wouldn’t stick at the wrong place. I actually laid down the panel and pressed it into place. The panels are 9 feet long so we had to be careful to keep them straight for two reasons: the area we had to mount it was narrow so we couldn’t miss it, and if it wasn’t straight it would leave a gap where water and dust could creep under. Keeping it straight was the only tricky part but we were able to do it by going slowly just being careful. Once that first one was attached we did the other one and it went easier. 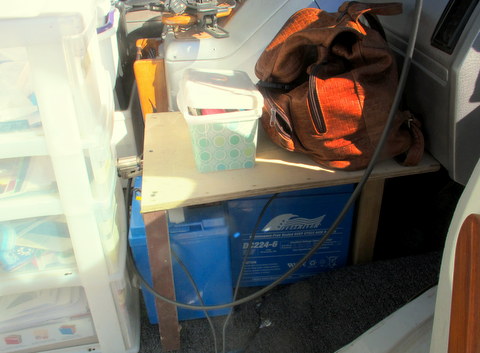 Terry had already taken her front seat our to make more room so the batteries went there. I made a little tray to go over her new Full River AGM golf carts so she could use it for more storage.

The simplest way to get the power cords into the van was a hole so we drilled 4 small holes in the roof and caulked them good. We ran the wires under the headliner and out to where we mounted the solar controller. We bought an inexpensive SunForce solar controller from Amazon.com. I know several people who own this controller and they have proven reliable and very inexpensive. I like it because it has a digital display of the batteries voltage and I think being watchful of your batteries voltage is the best way to extend their life and save you some money. We put the controller on the divider between the  cab and living area so she can easily see it. I suggested she keep an eye on it and always keep it above 12.2–and even higher was better. That way her batteries would last a long time! And that is important when you buy AGM golf cart batteries because they are very expensive, $250 each for two. She bought Full River batteries because of their extremely long warranty. She had taken out her passenger seat for extra space, so we put the batteries in there. I had some scrap lumber so I built a little shelf to go above the batteries  to protect them and regain some storage space. I was careful to build it so she could remove the doghouse from here engine without having to move anything. I wanted a fuse between the solar contoller and the batteries to protect the expensive equipment from ground faults or spikes so I bought a 30 amp spade connector and holder at WalMart. I used butt connectors to put it in line on the positive wire from the controller to the battery.


Two last things we had to do before her solar panels were useful: we had to install an inverter and a 12 volt cigarrette lighter plug. I am a big fan of the Cobra 400 watt inverter so we bought one of those off of Amazon and picked up a simple cigarette lighter plug at WalMart. All the wiring for the whole system was 10 gauge because it  doesn’t carry much power. The only real electrical knowledge you have to have for this installation is how to strip and crimp a wire. If you have ever done that before, then this is a simple project. Everything is black-to-black, red-to-red wiring. All you need to do is cut the wires, strip off a little at the end, and crimp on a connector (usually ring connectors but a few butt connectors). Then you take the nut off the bolt and slip the ring over it and tighten the nut back on. Because it is 10 gauge wire go to walmart and buy an assortment of the yellow connectors. The bolts on the batteries are larger so you will need some 3/8 inch ring connectors for them. One of these days I will do a post with videos of how to strip and crimp wire. Once you are comfortable with that, the whole world of 12 volt wiring opens up to you because most of it is just red-to-red, black-to-black.