I first met Charlene Swankie in 2009 at a get-together of the Yahoo group vandwellers. She had just bought a 2006 Chevy Express van and was just getting started on her conversion. She realized the most important thing was getting adequate ventilation in the van. So she bought a FantasticFan and had us help her install it. I say “help her” in only the widest terms. She did every bit of the work herself and refused to let us do any of the actual work (that’s me with her in the picture below). 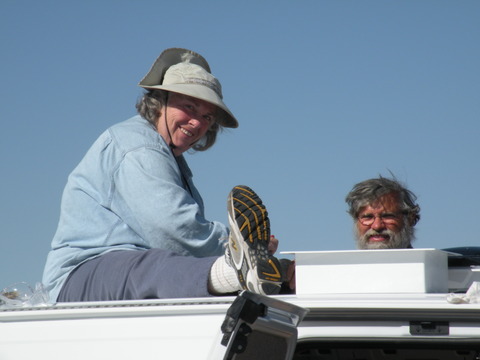 Like most of us it was a long trip for Charlene to move into her van. As a young woman she had done a lot of backpacking, taking multi-week trips with only the things on her back. Later as a young mother, the family had gone car camping out of a van. So in 2005, when she was having financial trouble, it occurred to her that if she could live with only the things on her back, she should be able to live like royalty out of a van. So she moved into a Ford Aerostar minivan, her first brand new vehicle. She started vandwelling out of necessity, but like so many of us, she quickly fell in love with it!   Unfortunately, double knee replacement surgeries required her to move back into a house for awhile, but her heart was still in vandwelling. She had always suffered from breathing issues but they had gotten much worse and she was diagnosed with asthma and COPD in 2008. Living in a house became intolerable to her because of her chemical sensitivities. She found that being in a van solved all her breathing issues, so in January of 2009 she bought her Express van and started converting it into her home. 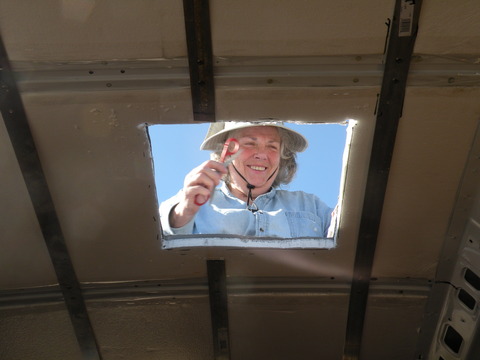 I have talked to a lot of people about vandwelling. The majority of them say they would love to do it, but…. and they come up with a reason they can’t. Charlene wasn’t going to let any excuses hold her back from the life of freedom and happiness she wanted. So as a 64 year-old woman, she took the leap and found the life she has longed for. I hope you find her as inspiring as I have and say to yourself, “If she can do it, so can I.”

She has done a lot of really great and creative things with her van that we can all find very  helpful. Let’s look at some of them: 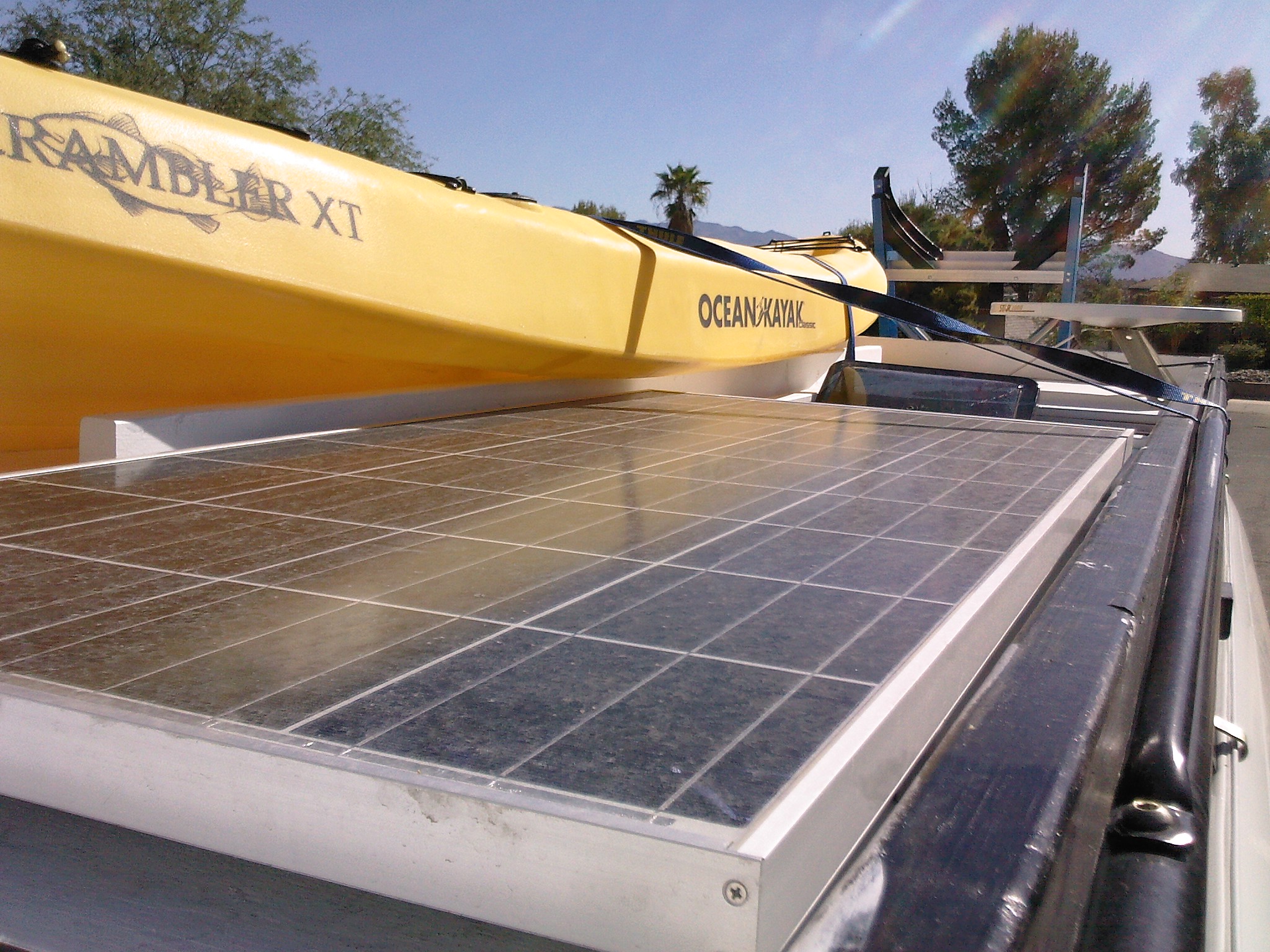 Installed a Roof Rack:
I have always thought a roof rack on a van was a great idea. She has a KargoMaster that she covered with plywood. That means the roof of her van is always in the shade, greatly cooling the van! It also gives her a great platform to mount things on her roof without more holes in it. She attached a solar panel to the plywood as well as a Winegard Roadstar over-the-air TV antenna. She also carries her kayak on the rack. At some point in the future she could add a solar hot water system if she wanted one. 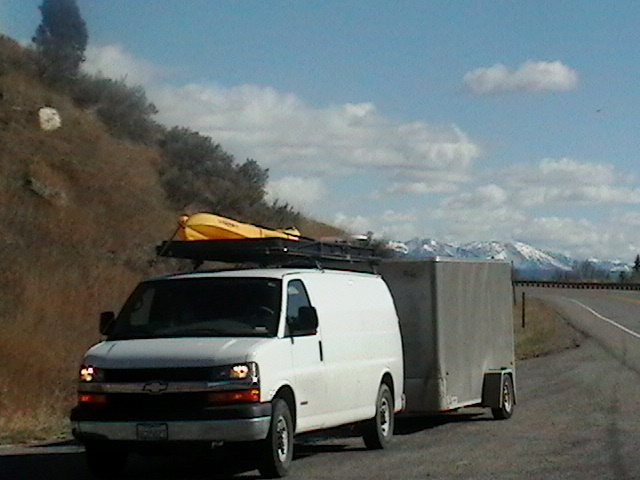 She Pulls a Cargo Trailer:
One problem every vandweller faces is what to do with all their excess stuff. Some of us keep a storage place, but that gets expensive fast. Instead, Charlene bought a cargo trailer to carry her excess stuff. When she sets up camp, the trailer allows her to carry the things that bring a lot of extra comfort, such as a canopy for outdoor living.  Another example is she carries a portable sewing machine. That allows her to repair her clothes and even make new ones (or gifts for the grandkids). Genealogy has been a life-long passion to her and she has a huge volume of notes, photographs, and various documents on her family that she is carrying with her. She has a scanner and is digitizing all this material so eventually the trailer will clear out enough for her to add a bunk and kitchen. A scanner has a lot of advantages to a vandweller, since it allows you to digitize books, receipts, articles and other things so you can keep the info, but it doesn’t take up room or add weight.

Eventually, if she ever gets done with her travels, she may buy a little piece of land and settle down on it (or use it as a base camp), using the trailer as a cozy little cabin. 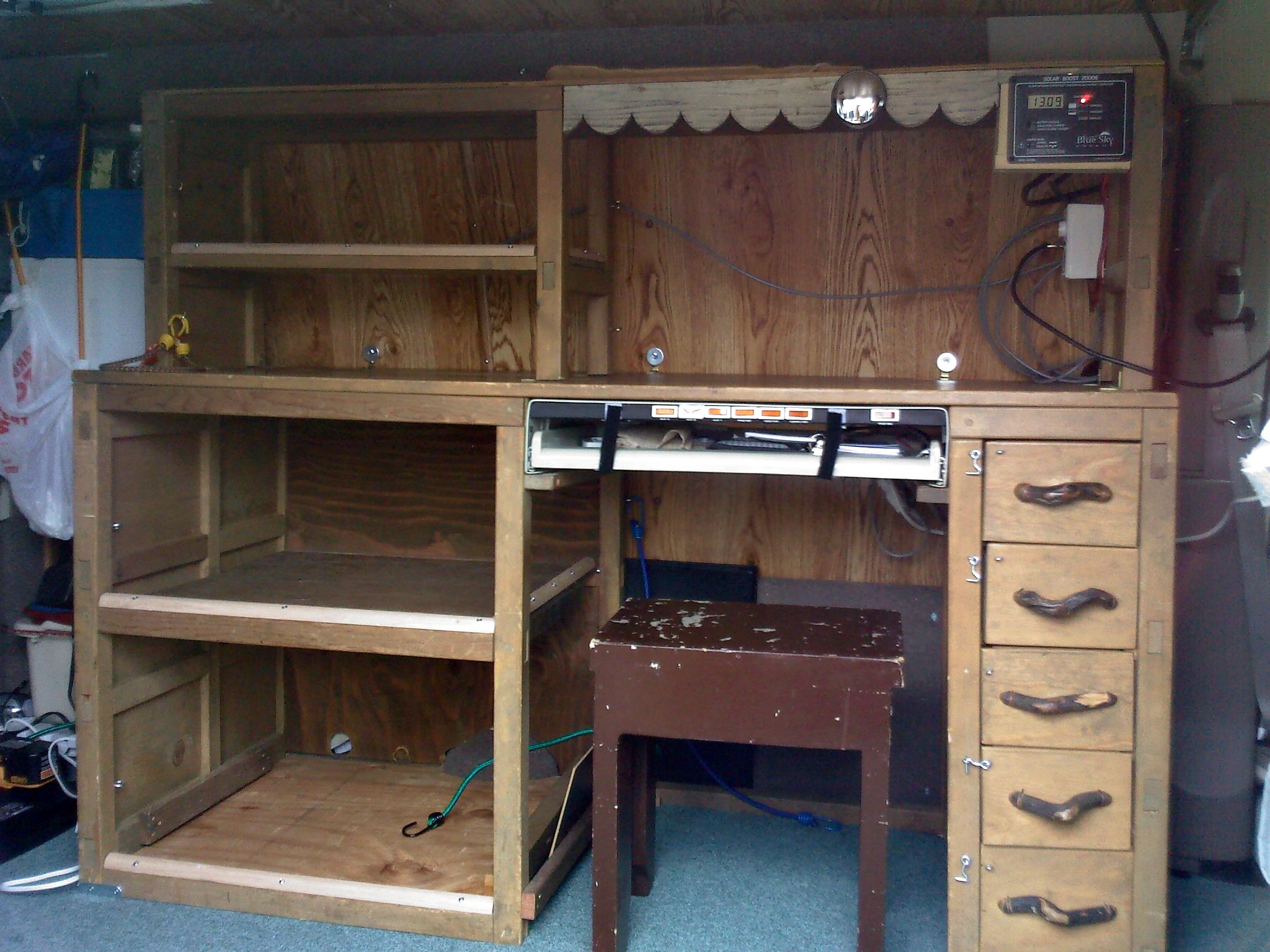 She Installed a Desk:
Because she spends so much time at the computer scanning in her genealogy, a desk was essential. She had this one at home so she modified it to fit in her van. It gives the scanner and printer a home and she gets online there also. The majority of vandwellers use computers to get online, so this would be helpful to many of us. Especially for those who work from their vans. She uses a Verizon data card to get online, and she has been very happy with their service. 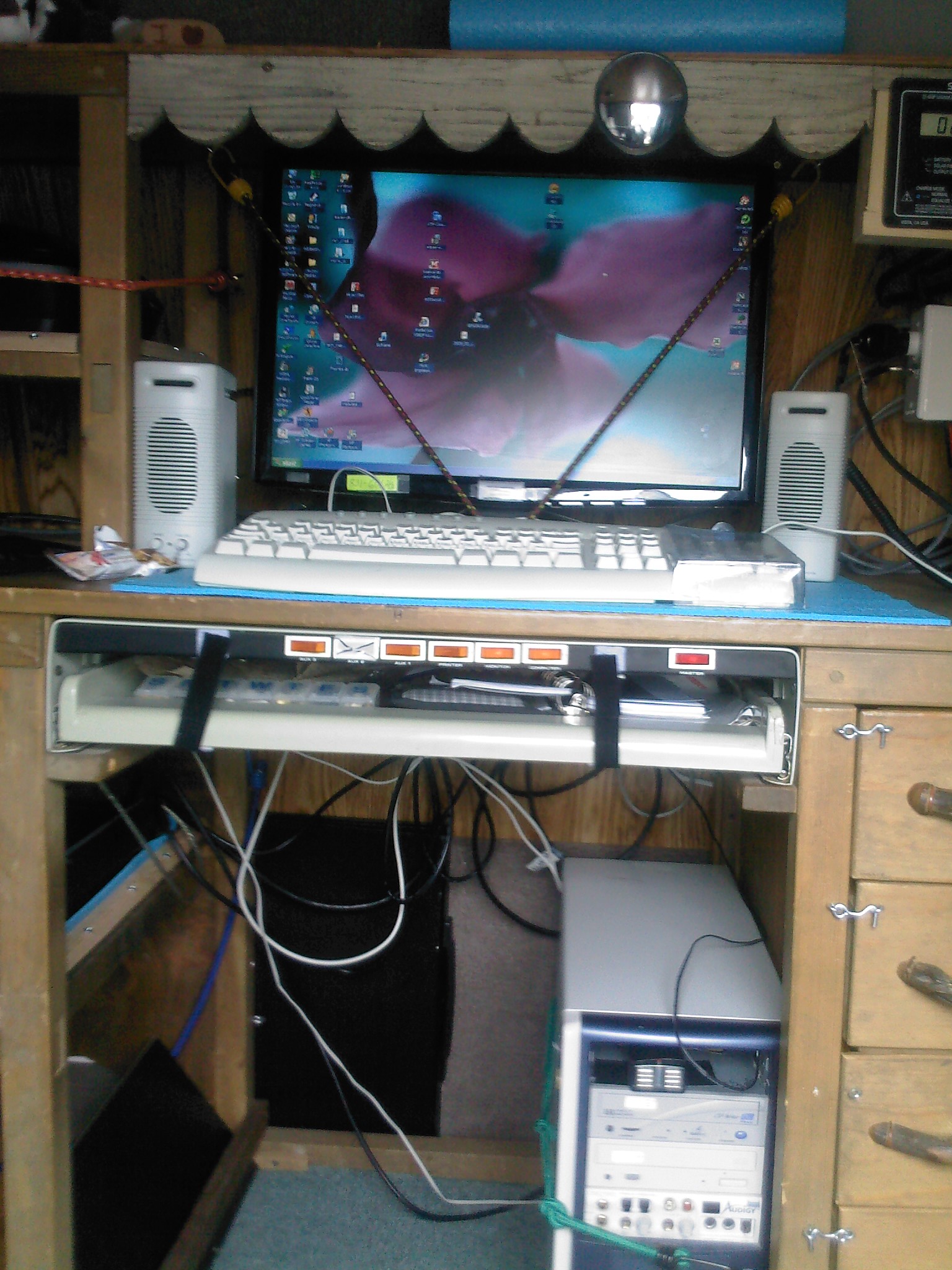 She has Hobbies and Goals:
One question that comes up fairly often from newcomers to vandwelling is “How do you spend your time?”  And it is very true that living in a van frees up a lot of time. Many of us are like Charlene, living on Social Security Disability, a pension, or Social Security, so we have a lot of extra time. For many people, the free time of retirement is actually unhealthy, leading to lethargy or even an early death. Charlene has her passion for genealogy to keep her busy, but she wanted more for her new life of vandwelling. For years bad knees had restricted her activity and kept her from the outdoors and caused her to steadily gain weight. After a double knee replacement she wanted a new hobby to keep her active and in the outdoors. She looked around and fell in love with kayaking (she loved being on the water and it was easy on her knees). She wanted a grand goal for her life so she determined to kayak all 50 states! Already in her first year she has kayaked 8 states and is still going strong. 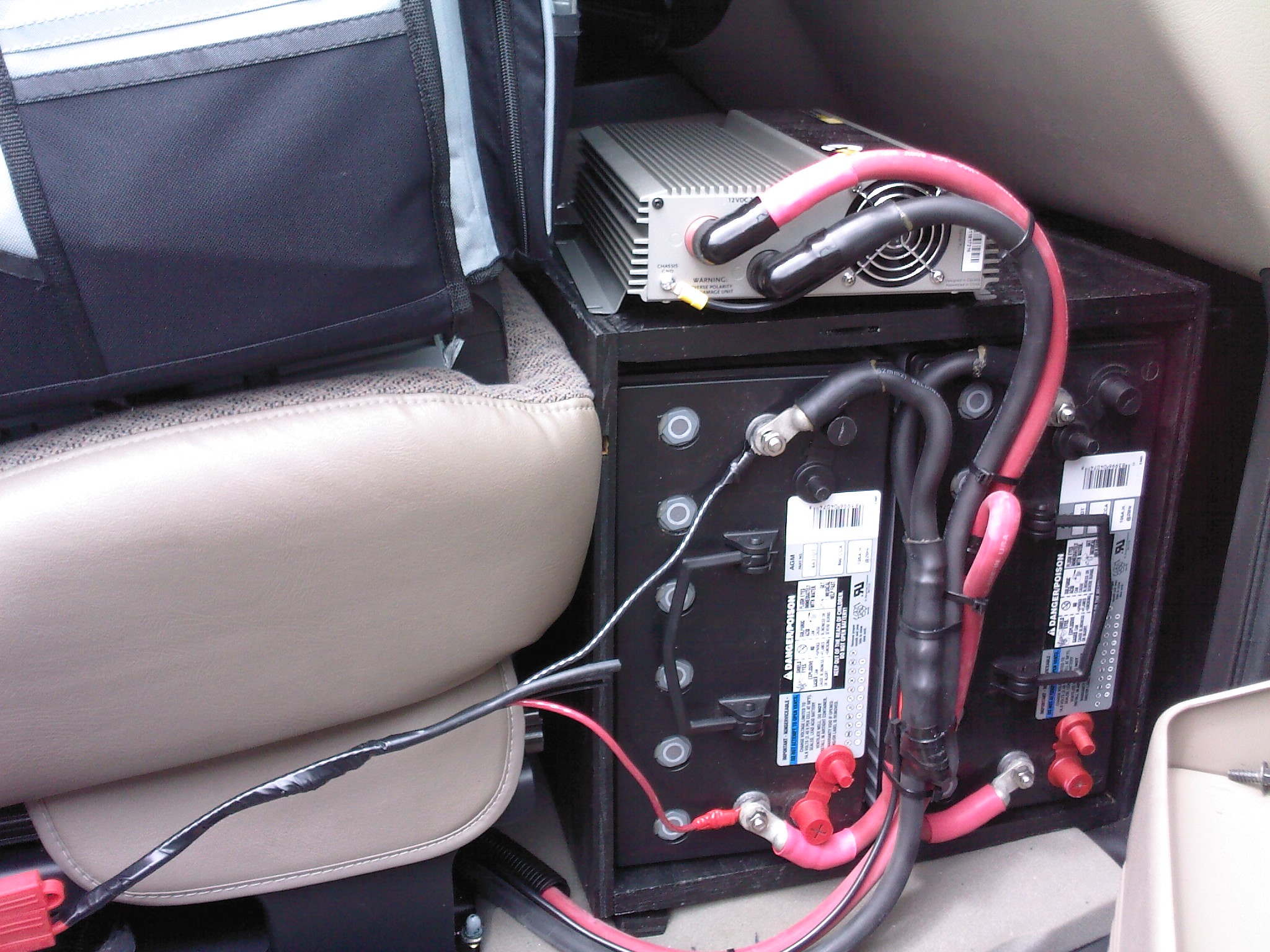 Installed a Solar Panel and Inverter
Because of her work digitizing her genealogy, she needed an abundance of power, so she installed a 130 watt solar panel on her roof rack. She tried buying lead-acid golf cart batteries, but just having them in the van without being hooked up caused a flare up of her asthma. So she returned them and bought AGM deep-cycle batteries instead. While they cost more, they can be put anywhere and are maintenance free. She decided to place them on the floor of the passenger seat. It was ideal because that moved something very heavy as far forward as possible, and used what was otherwise wasted space–and you can’t waste any space when living in a van! As you can see from the picture, they are on their ends in a box and the inverter (a 1200 watt Xantrex bought from Amazon.com) is mounted on top of the box. I can attest that it is still possible to sit in the front seat and put your seat belt on. I wouldn’t want to do it for days on end, but for shorter trips it is quite comfortable. 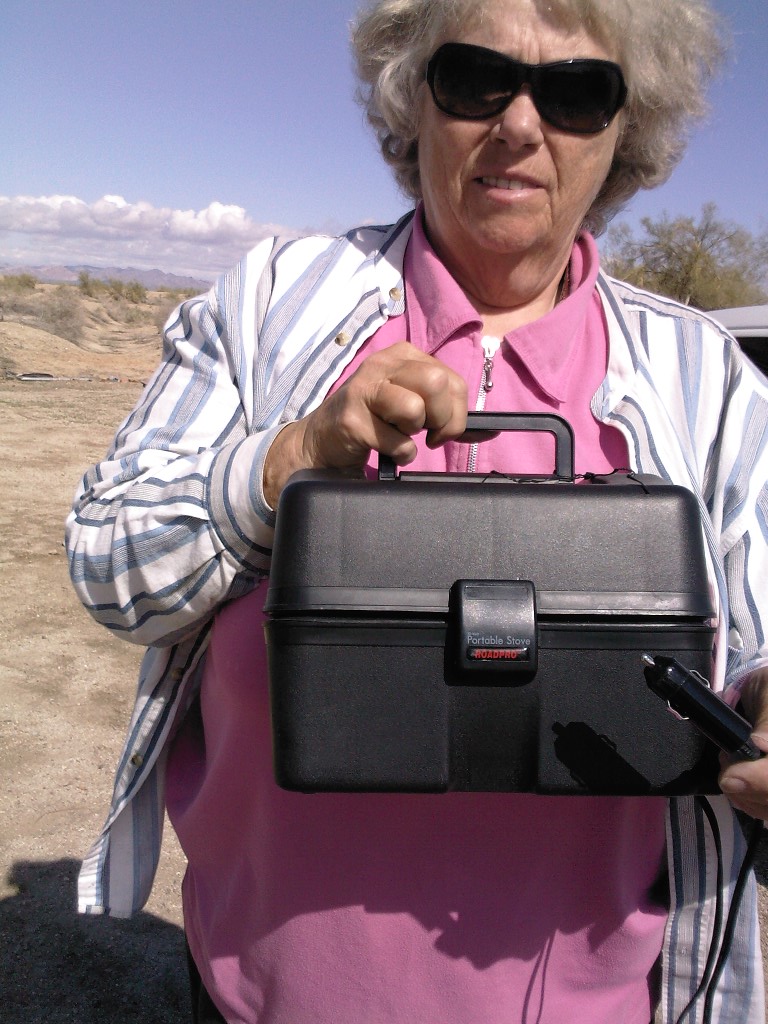 She uses a Microwave and RoadPro 12 Volt Stove
Charlene was uncomfortable with the idea of using a gas stove in the van. She didn’t like storing the propane or butane bottles in the van. Even worse, the open flame creates the danger of fire or carbon monoxide poisoning. She decided on electric cooking instead.  With the solar panel she had enough power, so she bought a 12 volt RoadPro stove at a truck stop and someone gave her a microwave. Together, they work very well for her cooking needs. Because of their very large power draw, she starts and runs the engine when she uses either one. The 1200 watt inverter handles the microwave quite well, and she limits the length of time she uses it. The RoadPro stove is generally just used while driving. 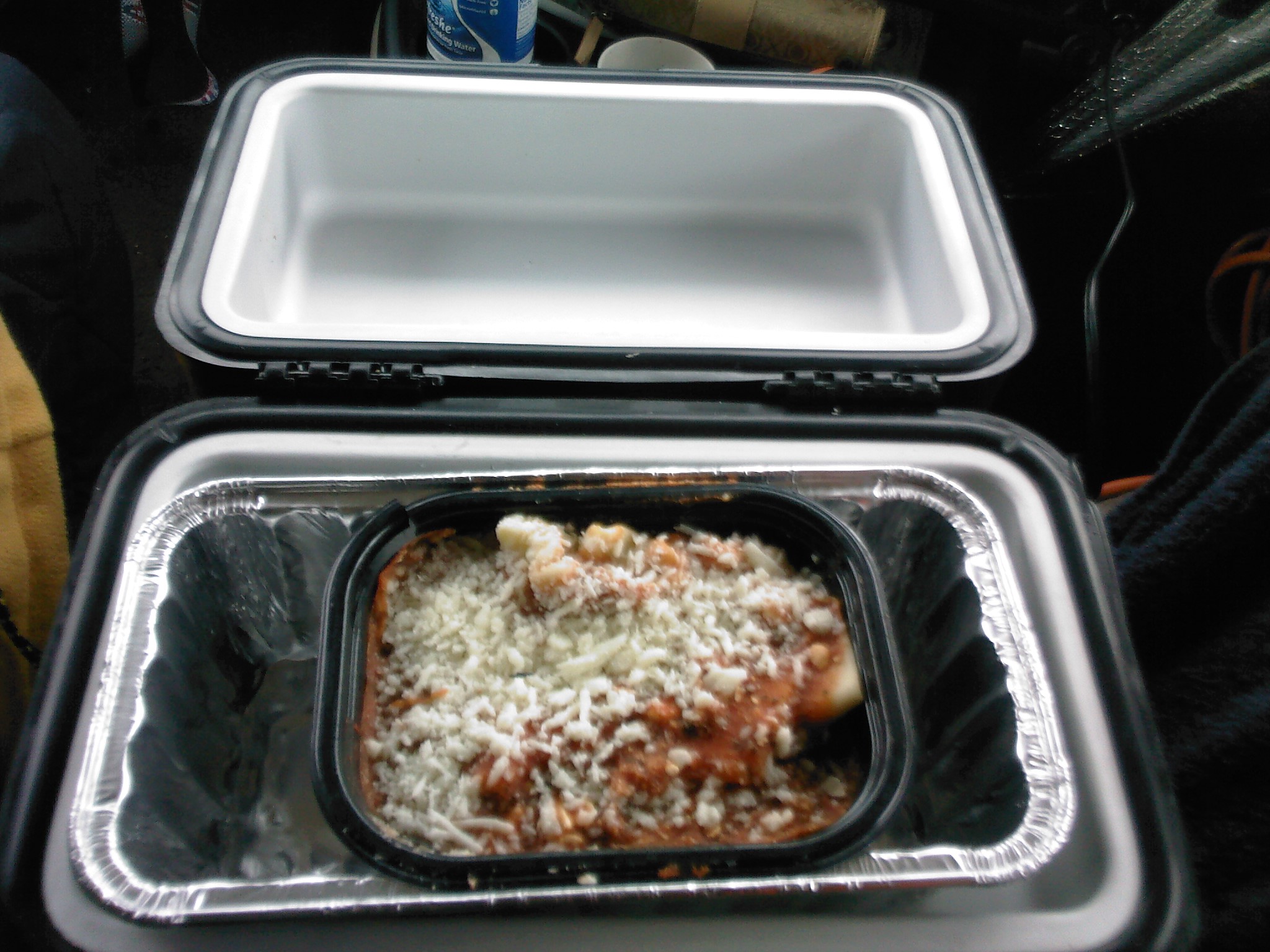 The RoadPro stove is particularly handy. It is about the size of a workman’s lunch-box, and plugs into the cigarette lighter of great job. It is great for frozen dinners, but it does so much more. She has cooked, eggs, corn bread, stews, cookies and many other things in it. Because she uses an aluminum foil liner, she even avoids washing dishes! 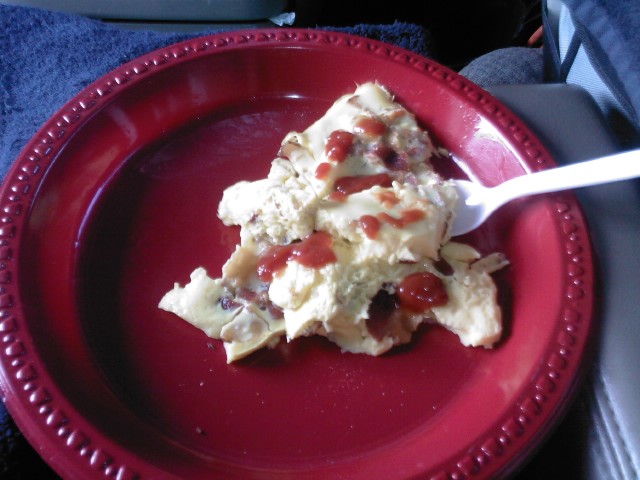 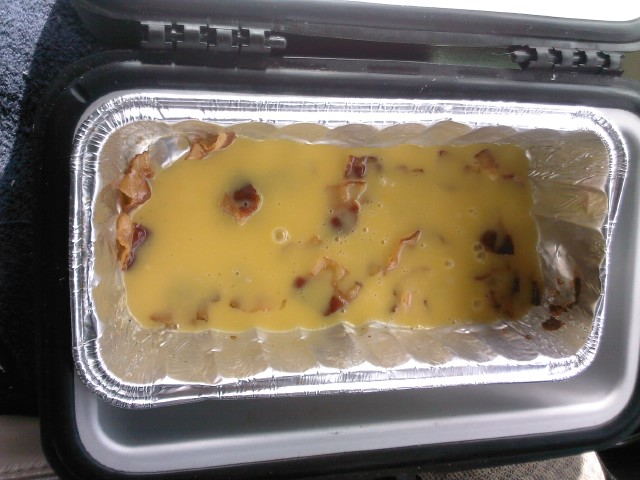 She Uses Solar Hot Water
Like all of us, she needed hot water to bathe and wash dishes. In a stroke of genius, she painted a one gallon water bottle black and placed it in the sun, and that worked pretty well. But the bottles. She had an aluminum screen that goes across the  windshield to keep the heat out of the car so why not put one behind the water bottle to aim the heat at the bottle? That worked great! She places three, one-gallon jugs in front of a windshield screen on a sunny day and by afternoon the water gets up to 150 degrees! That was great if she wanted to use the water then, but what if she wanted to use it the next morning to wash her hair? So she took the old cooler she had and painted the inside black and added extra insulation. She leaves the cooler open to the sun with the bottles and when the water starts to cool off she puts the three jugs in the pre-warmed “cooler.” The next morning the water is still warm enough to be very comfortable to bathe with. Free and easy hot water! Because of the risk of toxins from the paint leeching into the water, she doesn’t drink from the plastic jugs. For drinking and cooking she painted a glass jar black and puts it in front of the sunscreen and the water easily gets hot enough to make Ramen noodles or hot drinks. 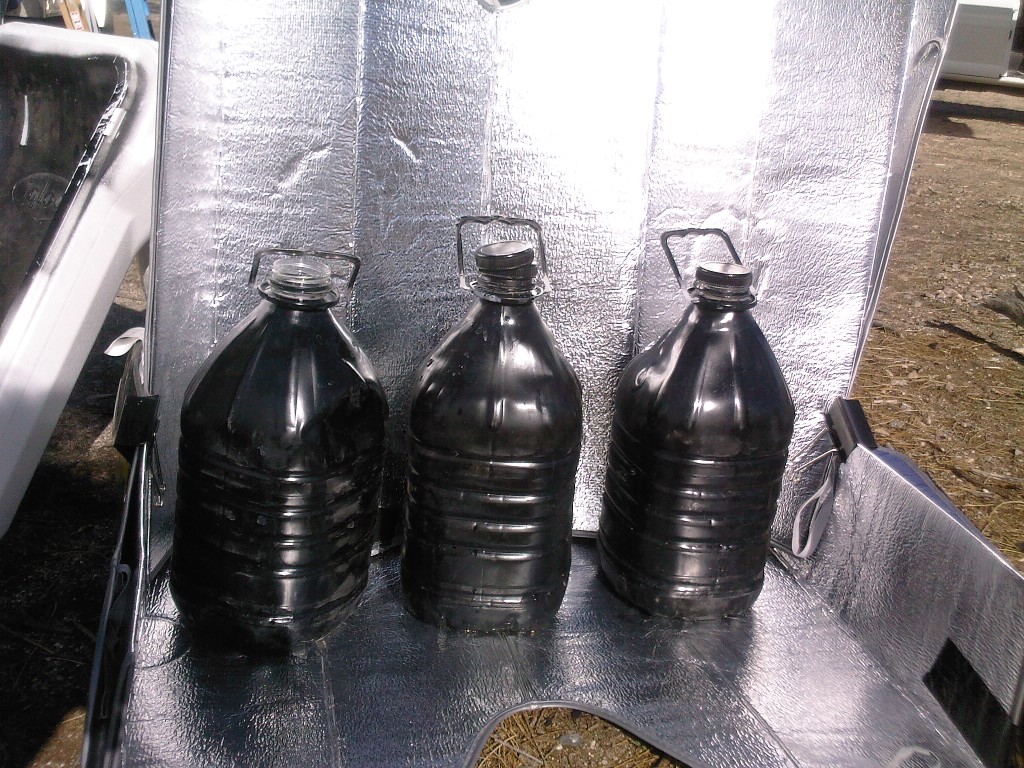 Charlene needs to watch her spending, so she parks for free on public land whenever possible. She stays in National Forests and on BLM desert land whenever she can. There are numerous advantages in that. 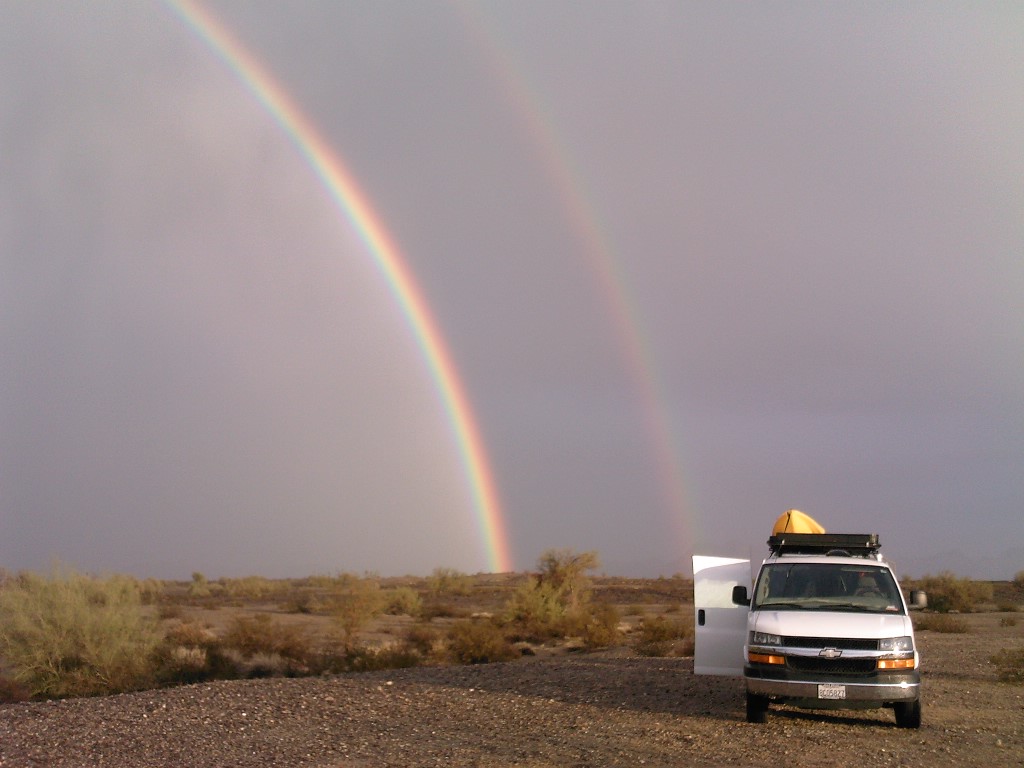 If you are dreaming about mobile living but aren’t sure, I hope you find inspiration in Charlene’s  example of boldness and courage and it helps you follow your heart. On the other hand, if you have been doing it for a while now, I hope you have found some of these ideas useful and they make your life better.

To follow Charlene’s adventures, go to her blog at:  http://SwankieWheels.blogspot.com