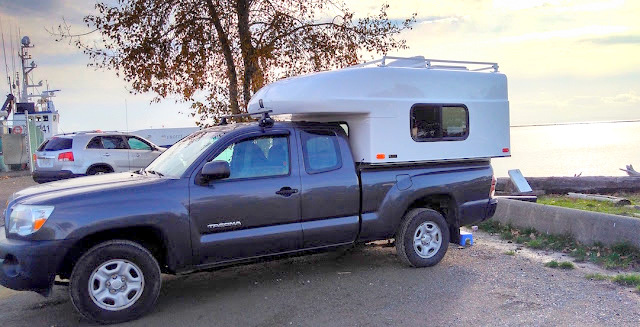 Today’s post is a guest post from one of my long-time readers in the Pacific Northwest, Ming, she has been such a consistent commenter on my blog that after awhile I’ve started to feel like I know her, like she’s an old friend!   Over the years we’ve discussed different rigs and the pros and cons of many of them. But I must say I am very envious of what she has finally chosen for herself! It’s very hard to beat this combination! But, I’ll let her tell you her own story. This is a guest post from her blog, you can find it here: http://truckcamperdesignandbuild.blogspot.ca/

We picked up the camper yesterday from Tufport  (http://www.tufport.com/). And, of course, celebrated by taking it to the park for a picnic celebration. Here it is on the forklift on it’s way to the back of the truck. Now I have to build the beds, storage and table. Why this truck and this camper?

The Truck: I chose a Toyota Tacoma 2 Wheel Drive, 4 Cylinder Truck. The Tacoma is supremely reliable. It’s small enough to be used as a city vehicle, even with a small camper on it. It’s my only vehicle. It has great fuel economy, especially with 2 wheel drive. It’s tough enough to be able to handle dirt roads and get me to out-of-the-way spots where I like to camp. Should I need 4 wheel drive in the future it’ll be easy to move the camper on to a new truck. This is one of many reasons I didn’t go with a van or other type of RV.
The Camper: Initially, and for a very long time, I wanted a Four Wheel pop up camper manufactured in the U.S. But, in the end I decided on this small fibreglass shell for three reasons: 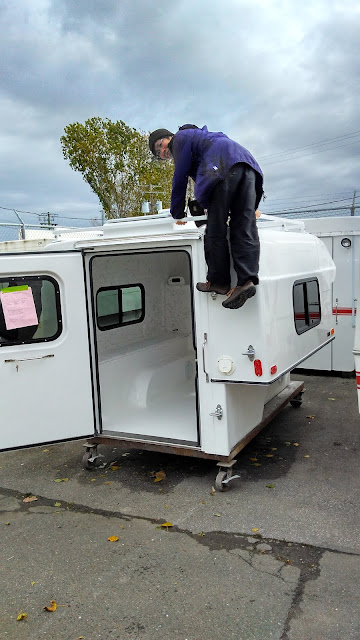 I inspect every last inch of it before they put it on the truck.

How much does it cost?

The camper shell before modifications costs $6500.00 Cdn. After all the modifications the shell was around $10,000 ($7,000 USD). The truck needed some modifications to make it Camper worthy. I installed air bags ($870 including installation) to improve the suspension to carry the 500 lb. shell. And I upgraded my battery to an Optima Yellow Top ($400) to be able to run the fan and light for hours and to recharge phones and laptops. I plan to do the build of the interior with the least cost manageable. I chose to build the interior myself because I don’t like conventional RV plans and I want to build an interior that suits how I want to use the camper better. Cost is also a consideration for choosing to do it myself.

It will take a while to save up for power solutions. I already have a 27 watt portable solar panel. I plan to upgrade to 300 watts eventually coupled with a lithium battery bank and a small electric fridge to replace the cooler. $3000 plus USD.
I’m particularly happy about the Bomar boat hatch/skylight and the Maxxair Fan. I did a lot of research before I decided on these two modifications. I chose the Bomar because Bomar sold the biggest boat hatch I could find in Canada. Light is very important to me. I’ve fantasized about skylights for years. I wanted a Heki RV skylight, but it had to be ordered from Europe and they can leak. I chose the Maxxair because it’s possible to install a hood over it so it can be open in the rain, very important to reduce condensation in wet weather. I live in the Pacific Northwest.

Photos below: Above my head in the left corner in the photo below is another modification, a combination 12V socket and dual USB ports for recharging electronics and computers. Ahead of the fan is a light fixture for which I will buy an LED bulb, they use 1/10th the power of an incandescent. 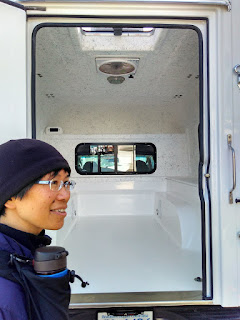 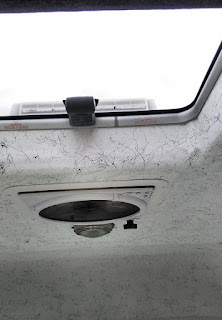 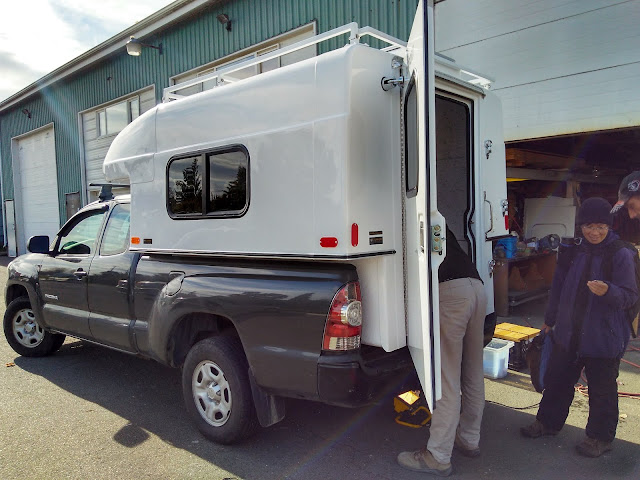 I took it out for a spin and a tryout. We went to Garry Point Park and parked it in a favorite spot for sea and sky gazing. You can see the boat steps folded  up on the wall beside the door. I can access the roof without carrying a ladder. The fiberglass camper allows me to walk around on the roof. Something I could not have done with a Four Wheel pop-up camper, which I was seriously considering for many years. 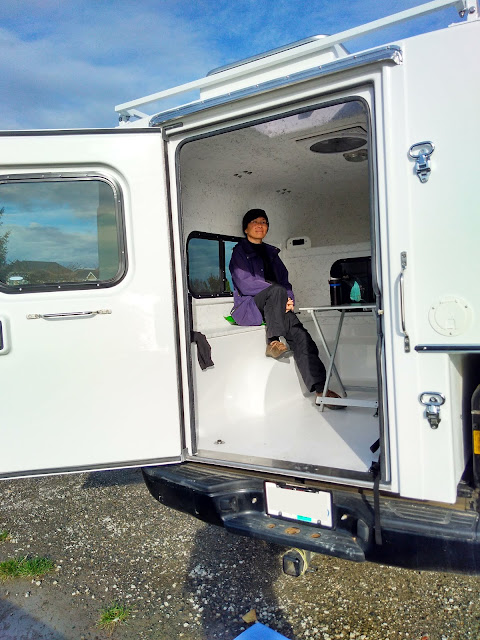 Sit and gaze. Think about finishing it inside. Can’t wait to start.

Photos Below:  All the views. Now to build it out for camping and keep the views intact. 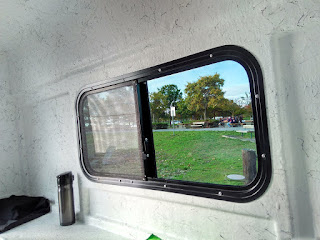 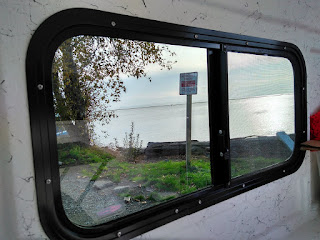 Tufport did a great job, but one major disappointment was that the windows were not where I specified. I wanted 2 1/2  feet of space on the wall between the end of the camper and the window so that I could build a counter and storage of that width there. There is only 2 feet! I have to rejig my plans.

Sitting in the camper and using it has gotten me thinking about my original plans. The windows are low and my plans for seating are too high to see the views out of the windows while seated at the table. As you can see from the photos, being able to see out the windows will be half the pleasure of this camper. Now I’m thinking about how to build the bed/seating so that it can be lowered when it is in bench/table configuration. 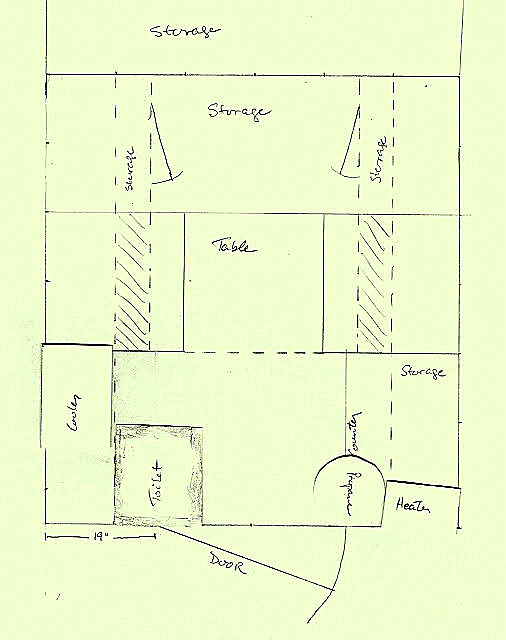 The table is between two benches and is removable so that that area becomes part of the bed. The bed is not marked here it is the rectangular area with the table in the center and the rectangle behind that area. As you can see there is storage under the bed and everywhere else.
Of course, in reality, things might change.

Today I head out to Home Depot to get some wood cut to measure for the bed. We want to take the camper for a trial run before the end of October. This means that at least the bed has to be built by then. Stay tuned for the build
I will attempt to post an ongoing description of the build. Initially, I’m doing a temporary ‘throw it together’ so we can get out by the end of October for a trial run. This will inform future decisions about what needs to be done.

Be sure and check out my YouTube Channel here:

Previous Build Your Own Camper
Next Ingenious Camper Shell