How to Live Aboard a Boat

How to Live Aboard a Boat

In my travels and through my websites and forum I meet a lot of very interesting people who have a lot of of very interesting ideas and histories. Some of them are so interesting I want to pass their stories along to you; Brad is one of them.  I met him at the last Rubber Tramp Rendezvous. He was there in a very nice Toyota Class C, and when I found out he was not only a vandweller but he had also lived for years on a boat (and learned how to make a living out of it) I just knew I had to share it with all of you. So I asked him to write a post for the blog and this is it. There is a great deal of similarity between living on a boat and living in a van or RV, so I think you will enjoy and learn from his story. I enjoyed it so much I encouraged Brad to write a Kindle book on the topic and he thought that was a great idea, so hopefully he is doing that right now. When he makes it available, I will let you all know about it.
I also want to encourage all of you to consider writing a post for my blog. You don’t have to be Shakespeare, just have a basic ability to write. Or, if you prefer, you can send me your story and pictures and I will write it for you. Pictures are critical though, you must have some. Many of you know as much or more than I do, so the more voices that get out the better. And we will put in a link to whatever you want to promote. So here is Brad’s story in his own words: 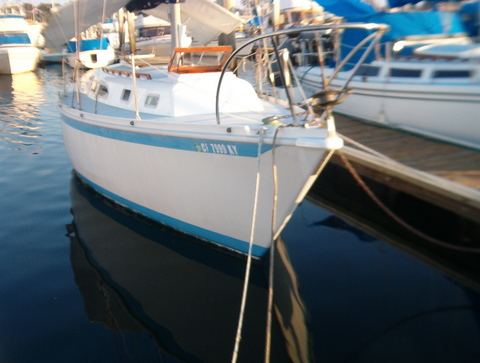 Freedom! That’s what the RV-nomad lifestyle and living aboard a boat have in common- in case you were wondering what this title is doing on this blog. You may be asking; freedom from what? For starters living aboard a boat, the same as the RV-nomad life can facilitate freedom from the rat-race, from consumerism, from suburbia, and from having too much stuff. All of this is a big part of why we choose to live this way. If you’re long-time reader of this blog, and follow the ideas presented, then you’re likely living a much freer life than you were previously. This is often a big reason why people live this way.
I recently attended the Rubber Tramp Rendezvous where I got to see how others were living this life of freedom. On one of our morning walks I was chatting with Bob about this lifestyle and I shared that I had also lived aboard a sailboat for a few years. Bob invited me to share some ideas with you about how to do that.
There are as many ways to live on a boat as there are ways to be a land-based nomad, but in this article we’ll keep the focus on the more frugal ways of doing it. Once a vessel is acquired, it can be done for as little or less money than living in a van or RV. In the beginning there are the two primary considerations; where to do it, and what vessel to do it on.
WHERE TO PUT YOUR BOAT?
As to geographic locations, the main criterion is water. You might think at first that this limits where you can choose to live. That may be true, as it limits you to only three quarters of the planet including inland waterways and lakes. My experience is living near coastal cities, so what I’ll share reflects that.
Many coastal cities were built and matured around a sea-port or harbor. These facilitated trade for growing civilizations. Most medium to large sized harbors still cater to the commercial side of boating while also supporting a thriving leisure boating community. In all of these locations you’ll find three primary locations for keeping a vessel. In descending order of monthly cost, these are marinas, moorings, and anchorages. Any of these three can be viable for living aboard.
Marina: We’ll first look at living aboard in a marina. The main benefits to this route are that you have electric hook-ups (shore-power), restroom and shower facilities and you’re in a gated community a short walk from a parking lot. Many marinas also offer storage lockers. Not all marinas allow living aboard, and there’s a fairly broad price range for monthly rent with those that do. Generally about one third to one half of the marinas near larger cities allow living aboard. Monthly rent will usually run between about half up to eighty percent of what a one bedroom apartment would cost in the same city. So, expense is the biggest possible negative to living at a marina. That said, it can be a great way to ease into the lifestyle while getting your vessel fixed up to your specifications.

Mooring Ball: Next there’s living on a mooring ball. There are designated areas in most large harbor cities that have permanent mooring balls and adjacent dinghy docks. Living on a mooring, in my opinion, gives you the best of everything. It’s affordable and you’re only a short dinghy ride away from parking, stores and the rest of the work-a-day world. Here where I live in San Diego moorings go for $120 – $140 per month – less than ten percent of rent for a one bedroom apartment. There is usually a waiting list, sometimes years, to acquire a mooring. The way around this is to watch Craigslist (also post), and ask around at the mooring offices for people who want to sub-let their mooring and/or boat. In my experience, if you’re diligent you’ll find a mooring within a month or so. It’s the best way I know to have a million-dollar waterfront view on the cheap…well besides stealth parking in an RV that is. :  )
Anchoring Out: Lastly, there’s anchoring out. This is where you drop the hook (anchor) in areas where it’s allowed. These allowable areas are becoming fewer and most are subjected to either ocean swell or passing ships which make your home rock roughly from side to side. It wouldn’t be my first choice, but it’s sometimes an option, and it’s free.
WHICH BOAT TO LIVE ON? 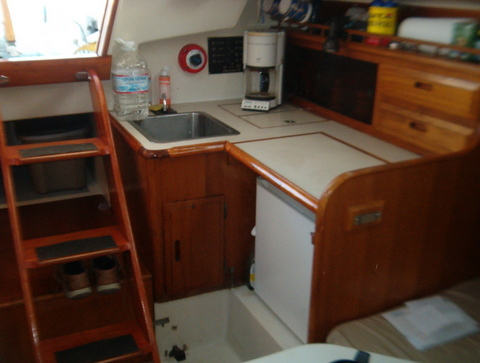 As to choosing a vessel, there’s one initial consideration; will it be a power boat or a sailboat? If you don’t already have a preference, you can successfully live aboard either one. The main differences are that a power boat of a similar length will have more livable room than a sailboat. The advantage of a sailboat is that the engine is considered auxiliary power, with your primary source of power being the wind. You can travel for free, or no fuel cost. I’m definitely prejudiced, having owned over a dozen sailboats and no power boats. The other advantage to sailboats in general is that you have a better chance of getting a good deal and being able to sell it for a profit.

BOAT PRICES?
Boat prices will range from free to more money than most of us would want to spend, but you can buy a very suitable boat for a few thousand dollars. If you’re patient and search diligently you’ll find some deals. I got one boat for free and after a couple of weeks of cleaning and fixing it up sold it for a net profit of $12,000. I did have to put a new engine in it, but found a rebuilt diesel for $2,500. Another boat, for which I paid one dollar, was sold for even more. Those are exceptional deals, and I was very patient and diligent, but it gives you an idea of what can be done. Realistically expect to spend two to four thousand for a boat that won’t need major repairs, and which you’ll be comfortable living on.
BEING PAID TO LIVE ON A BOAT!

This is an idea I’d like to stress; if you’re handy with tools, painting, and general mechanics you can make a decent income by fixing up and selling sailboats. I did this full-time for six years. I don’t think it could be done as easily with power boats. There’s a lot more to this than we have time for in a blog post, so my advice is to educate yourself before diving in.
One last idea that’s a good income generator is to charter out your boat. People will pay to have you take them out for several hours aboard your boat. This could be cumbersome while living aboard, but can be a consideration for supplemental income. I know several people who do this very actively – that is they live aboard and charter out their boat. Often a Captains license will be required in order to do this. If that’s the case you can either hire a Captain, or get your license which would allow you to drive other boats for income as well.
Living aboard is a great way to enjoy a lot more freedom in your life, live closer to nature, and to be free to travel and explore new horizons.

Previous Homesteading for Vandwellers
Next Live and Have Adventures When you are Young: Thru-Hiking the Colorado Trail