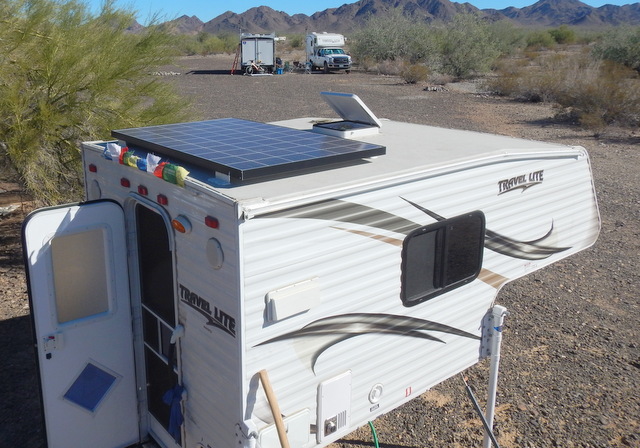 Sometimes the size of your roof limits how much solar you can get. This is a single 285 watt Kyocera panel that provides plenty of power for my friend Will.

(This is the first of a series I’m doing on solar. Rather than run them consecutively I’ll spread them out over time so you don’t get too bored with one subject.)
When you move into a van, one of the best thing you can do is get a solar power system so you can have all the power you need. However, for the majority of us the world of electricity is a mystery we want to know as little as possible about. All we really care is that when we flip on a switch, the light or appliance comes on. If it doesn’t, we replace it or call an electrician. But now that we’ve decided to be nomads in cars, vans and RVs and need a solar system for power, things get a whole lot more complicated.
Believe me, I understand your fear and frustration when it comes to learning and installing solar power. In 2009 I decided I had to have solar on my van but I couldn’t afford to pay someone to do it for me–I had it do it myself. But it was all just so hard to understand!! So I set about trying to unravel the mystery and began to read everything I could find on the web. It was a long hard process but six years later I have a good grasp of it. By far the simplest way to have solar is with a Renogy Portable Suitcase 100 watt system. Anybody can have it running in 5 minutes! Get it from Amazon here: Renogy 100 Watts Foldable Solar Suitcase

Today, I want to strip it down to its most basic elements and try to give you simple general instructions (with as little technical jargon as possible) on what to buy and do with it. In later posts I’ll go into more detail but still try to use a minimum amount of technical jargon to help you have a base understanding. 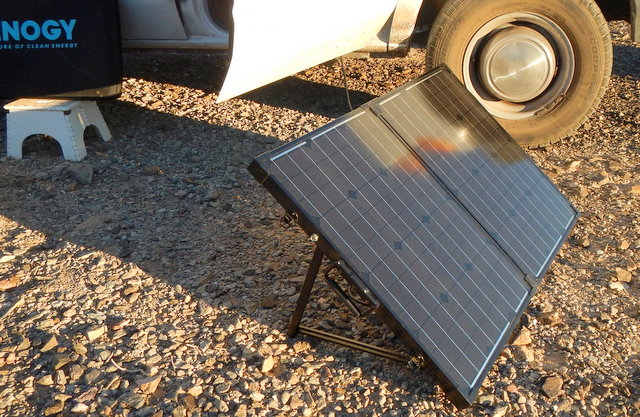 The minimum amount of solar I recommend is 100 watts. While its best to mount it on the roof, if you can’t a portable suitcase system like this one from Renogy works very well and is super simple and easy to use.

Q. How Much Solar do I need?

A. My simple answer is to buy all you can afford. Solar has gotten cheap enough that the chances are you can afford some, but maybe not all you want or need. So just start with all you can afford and leave room to add more as you grow. 100 watts really is the minimum and most people find that 200 works very well for them. I recommend 200 watts for most people.  Buying a complete kit is by far the easiest way into solarm I recommend these: Renogy 100 Watts Solar Rooftop Kit

or the Renogy 200W Mono Solar Rooftop Starter Kit,.
This chart shows what each system can reasonably run so you can decide which one works best for you:

Ain’t gonna happen! I’ve talked to thousands of nomads with solar and I’ve never heard anyone say they had too much solar and wish they had bought less! On the other hand, most have wished they had more! Why? What seemed like plenty of power during great weather in summer will be too little during long storms or in winter when the sun is low on the horizon and the days are much shorter.  The key is to size your system for when there is the least amount of sun. Far too many people buy too little solar and then are very unhappy with the results.

Q. Is there any limit to how much I can get?

Yes, it’s self-limiting. If you’re in a van there is a limited amount of space on the roof for panels or inside to carry the weight and size batteries for a too-big system. Generally, 500 watts (or less) is probably the upper limit of what you can fit on the roof of a van and that is probably the most any of us can afford or want. If you live in an RV you probably need more and should have room on the roof for it.

Q. What happens if I get too little?

Too little solar will be hard on your batteries and often leads to premature failure because they don’t get fully recharged every day. Batteries are so expensive you want them to last as long as you can and an abundance of solar power means your batteries will last longer and save you money in the long run. Would you rather spend $500 (or more) on battery replacement every two years, or every ten years? An abundance of solar will give you longer life out of your batteries.

Q. There are so many choices! What brand should I buy?

Let me just flat out say I recommend Renogy as the brand you should buy. Let me add that I don’t make a penny from them but I’ve known many people who bought Renogy systems and they’ve all been pleased with both the product and the service and support after the sale. Right now they’ve found the sweet spot of the very best balance of good quality products and very low prices. If you buy one of their kits you’ll get nearly everything you need in one reasonably priced package. For some reason Renogy doesn’t include fuses in their kits, order this one and put it in the positive wire closest to the battery post: Water-resistant In-Line Fuse Holder – 10 AWG

Q. What should I buy if I want better quality or more features?

If you want to take the time to learn everything you need to know to assemble your own parts and pieces, then you can buy better components for a little more money. But there is a steep learning curve to make your choices and put it together. When you’re done it will be a better system, but whether it’s worth the extra learning, time and money it cost you, only you can decide. It was for me, I’ve got almost 600 watts in three complete systems and they are all better components. If you want to go up to the next level of quality and features, these are my recommendations:

Q. I want to use all the electrical appliances that I used in my house, can I do that?

No, it simply isn’t practical to do many things from solar in a van that you could easily use in a house. You don’t have enough room on the roof for the panels or inside for the batteries they require. If you’re in an RV it may be possible but for most of us the cost, space on the roof and weight of the batteries make it totally impractical. Even worse, appliances with very large draws are death sentences for your batteries and you’ll be buying expensive batteries every year or two. Here is a list of things you should NOT plan on powering from solar:

Q. What if I can’t afford as much as I need?

Power conservation is the most important lesson any vandweller with solar can learn. If you need more solar than you can afford you’ll have to learn how to do without some things you’d like to have or find another way to power them. During storms or in the winter you’ll need to learn to use less power to keep your batteries happy and healthy.
One important way to do that is to use as much power early after the sun rises as possible. Hungry deep cycle batteries take a bigger charge so charge your devices earlier in the day rather than closer to sunset or after dark. At night, minimize your use of power by doing things like, 1) using LED light bulbs only and 2) if you have a 12 volt compressor fridge, be sure it is at it’s coldest before sunset.

Q. Can I charge my house batteries off the engine if I add solar?

Yes! It’s not only possible, it’s a very good idea because the two work together extremely well. The voltage regulator in your car and the solar controller will read the power coming in from the other and make sure your battery isn’t overcharged by reducing the current going into the battery. But if you aren’t getting enough sun to keep your batteries at 100% full, driving it will take it a long ways toward getting there. Be aware it’s possible it can shorten the life of your alternator.

Q. Can I use a generator and solar while charging off my car?

Yes, the three complement each other very well. I have enough solar that I don’t need a generator, but that’s a personal choice. I had one but sold it because I didn’t want to 1) carry gas for it, 2) change its oil, 3) maintain it, or 4) listen to it. I have solar so I can avoid all those things. You’ll need a smart charger to charge your battery from the generator.

Q. Is it a good idea to buy used solar panels?

Yes, it’s generally fine to watch craigslist for used panels. Of course you’ll want to look it over for obvious damage and check the voltage of the panel to see that it’s very close to what the manufacturing sticker says it should be. If it checks out I wouldn’t hesitate to buy a used panel if it’s a good price. However, often they are overpriced and you can get a new one for about the same price per watt. Unless I was on an extremely tight budget, I wouldn’t buy used unless it was at least 30% off the price of new one. I’d buy a new one instead.

Q. Do I need an inverter?

Probably. Inverters waste power so you want to use them as little as possible, but chances are you will have some 110 volt items you can only power from an inverter. 400 watts is usually enough for most people and you want to wire it directly to your battery and not use a cigarette lighter plug. I’ve had the best luck with Cobra inverters, get it from Amazon here: Cobra 400-Watt Power Inverter with 5-Volt USB Output

You want everything you possibly can to run from 12 volt to be powered directly from 12 volt—especially items that charge off USB and your laptop. Generally you can find a 12 volt charger for your laptop from Amazon or eBay which will save you a lot of power.
I’ll stop here with a basic introduction to solar, in my next solar post I’ll give more specific and technical details.

https://www.youtube.com/channel/UC_W_E5SFCxwpSOaqMjOOBTg
We have a video out describing the Renogy 100 watt Solar Suitcase,:
https://youtu.be/KtnjLOu6v14
If you don’t see the video above, click or cut and paste this into your browser:
youtu.be/KtnjLOu6v14