This is part two of my story on Cud Eastbound’s journey to spend a winter in Dawson City, Yukon Territories. With his permission I’ve reprinted his words and photos here. I think it’s an important story for us because I know many vandwellers who also want to own a piece of land they call their own and can spend part of the year on. I bought an acre of land for just that reason myself. Cud is proof that buying land and making it ready to live on is not that difficult or expensive.
I paid $2000 for an acre in northern Arizona and I plan to dig out a trench and bury a school bus for my home. I believe I can rent a Caterpillar D3 and buy the non-running school bus and have it delivered for less that $1000.  That’s pretty cheap for an underground home ready to move into!
We’re all going to get old and be forced off the road at some time and nearly all of us have a hunger for a place we call our own. While few of us will face the extreme cold of the Yukon, we can buy a piece of land and find old-time, simple, basic methods to create a very cheap and comfortable home for ourselves for our old-age or just for a stop-over on our annual migration.
The key thing to learn here are Cud’s boldness, ingenuity and frugality. Those are attributes every vandweller should strive to have more of.
I hope you are as inspired by it as I am. Check out his blog at http://nightdanger.lostwarren.com/

Night Danger is a big van, but there are many more things I could change on the inside in order to optimize space, and a lot more to come, but for now… Taking out the front seats was good, I need to borrow a grinder to get the bolts out of the floor, but for now it will be good. Shelves! Little shelves, big ones, any kind of shelf is great! 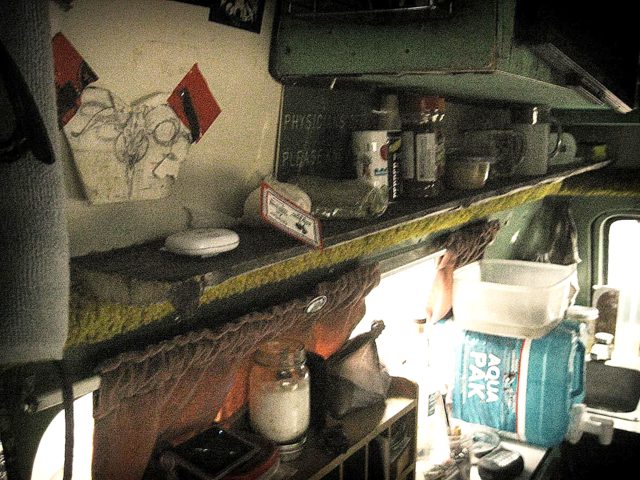 He put in shelves everywhere he could find the space. 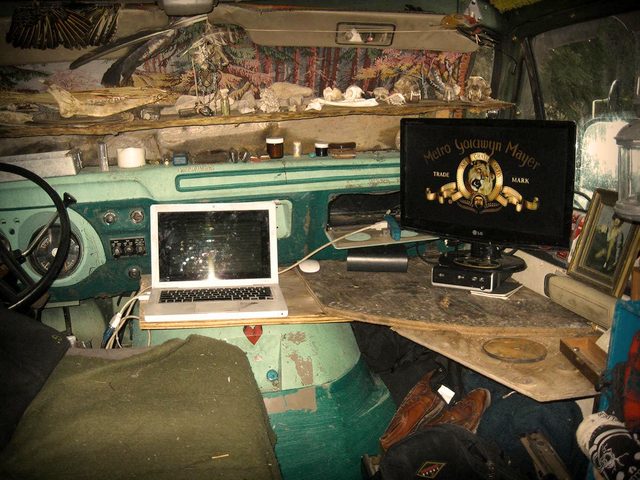 Because the van was now a stationary home, Cud removed both front seats and made use of the space. This is exactly what I plan to do with a school bus, except in Arizona burying it works better than straw bales. 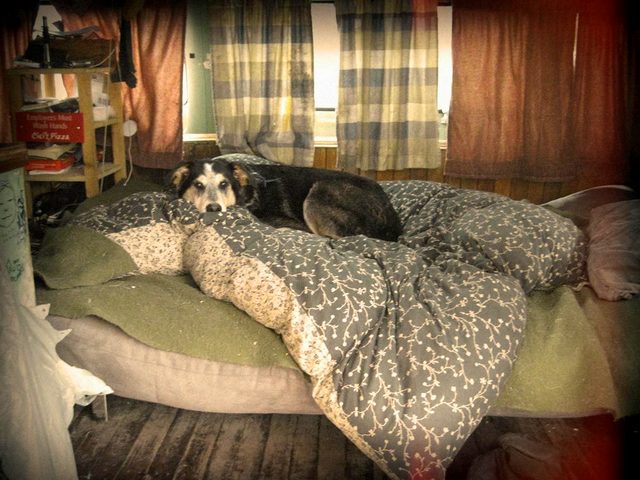 It takes lots of blankets and big dog on the bed to stay warm at these extreme temperatures!

The Outhouse and Woodshed

It finally snowed!
I still have not gotten my straw bales… a little mix up in Whitehorse. But that’s ok, still plenty of stuff to do! Here’s some photos of my quick woodshed, and some other neat things 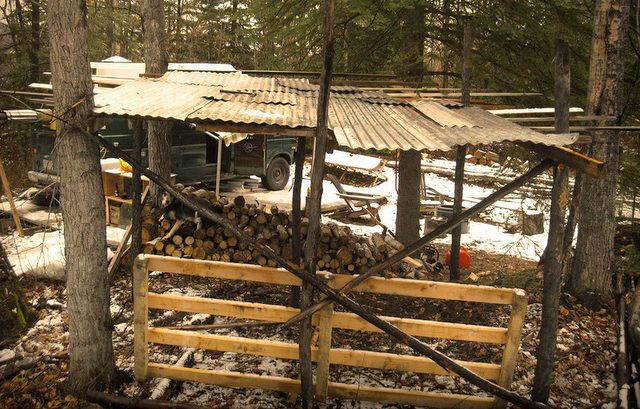 At -50 you burn a lot of wood so you have to put in many cords in the fall. And it has to stay dry to get maximum heat and burn time out of it For that, a woodshed is critically important. It’s just part of homesteading. 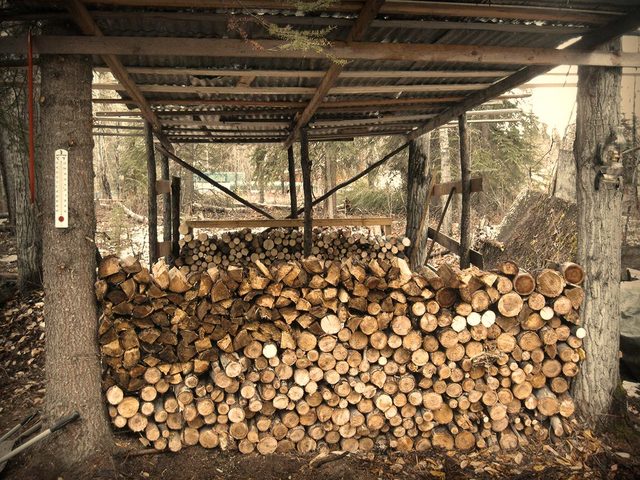 Homesteading in the far north, scrounging is a way of life. If at all possible, everything is reused and given a second life. Scrap sheet metal becomes a woodshed roof.

Here are some photos of my really quick outhouse, Its getting cold, and… I am not very fussy about where I poop. But I dug out and buried my main poles, then hucked some tin over it! For the poles I used some of the wood I’ve been getting up the Dempster highway, its old forest fire wood. Spruce I believe, and its light and strong. Normally I would not expose wood to earth, as it will rot, but it’s a temporary structure that will need improvements in the future. 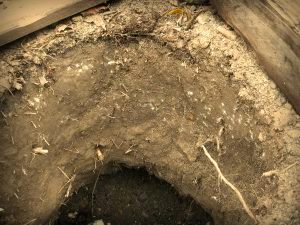 The basics of an outhouse are very simple; step one, dig a deep hole! 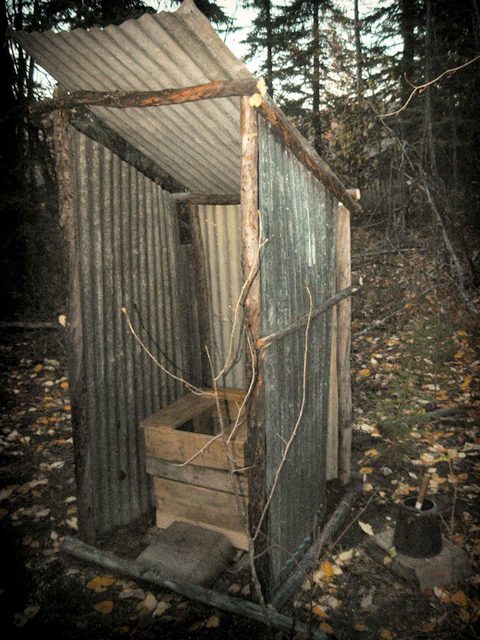 …step two is bury some poles and step three is attach a seat and some scrap tin. Isn’t it a beauty!

So, first things first I guess… I visit the dump every day to collect as many free supplies as possible.
Thought it would be a great idea to have a floor, to keep me, the van & the straw up off of the ground… less moisture…. keep away from the permafrost. 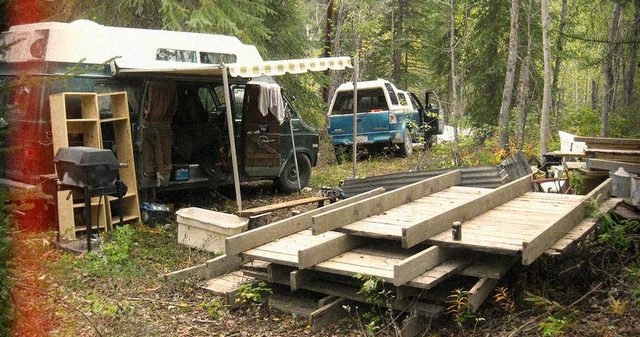 The sidewalk panels he got for free.

So I collected (with the help of Olin & Devon) six 6″X8″ Pieces of old sidewalks from Dawson City… Yes, these beasts are made entirely of 2″X6″‘s. I plan on laying them out so that I end up with a platform that is 6 inches off the ground, and that measures a whopping 24 feet by 12 feet. Also, something strong enough to support my 1 &1/2 ton camper van. Also, I forgot to mention, first off… I had to clear out the brush.. and find a nice spot! 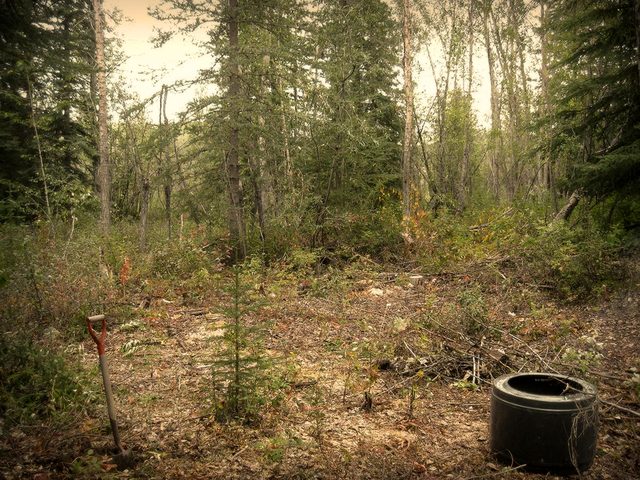 The clearing that would become the home for Night Danger. 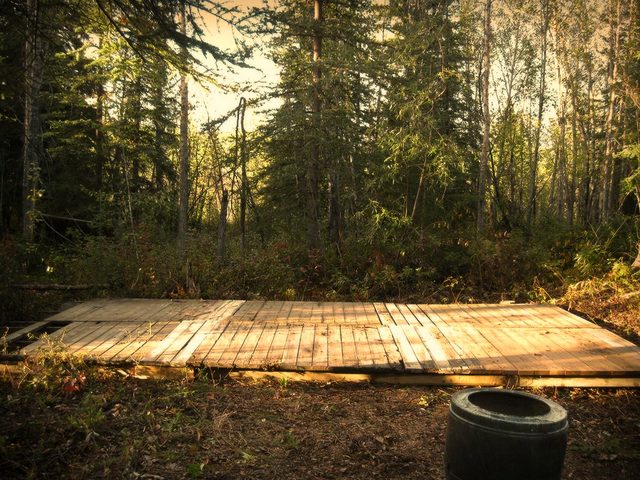 The deck being assembled. 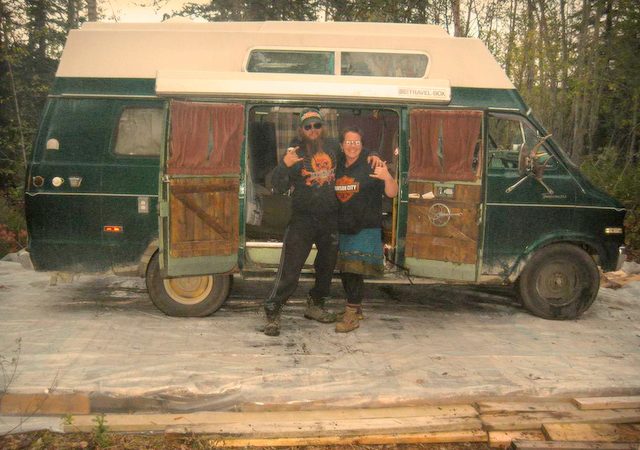 The deck covered in plastic and Night Danger in place.

So… the straw bales came quite late in the season and I was planning on mudding “stucco” or “cob” whatever the outside of the bales. However the temperature dropped too quickly and anything I would have applied to the bales would have either not stuck, or not cured properly.
I decided to purchase house wrap… $70 dollars later and some tuck tape I was in business.
Had some awesome help from friends and we got it all taped up…. Oh before that I used rope and twine to tie all the bales together, so they would not fall down. 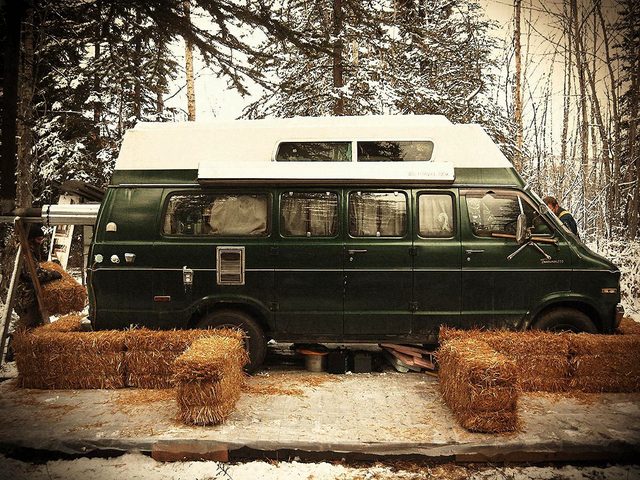 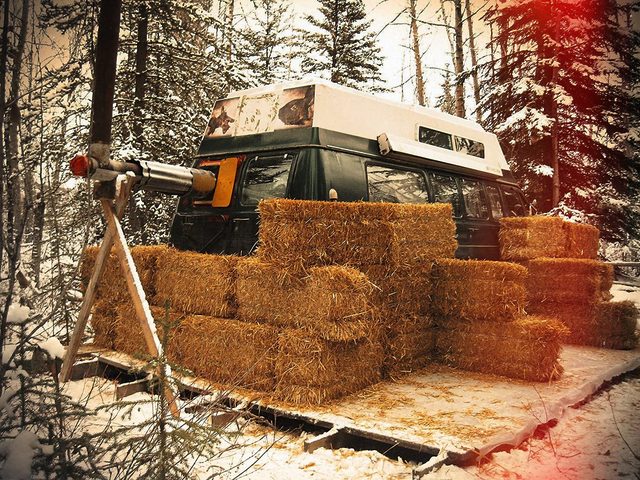 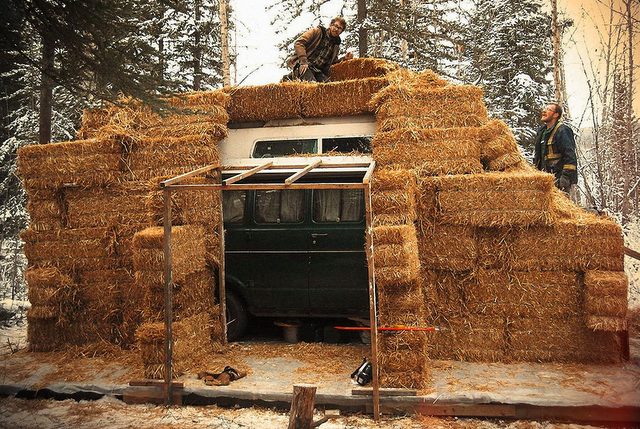 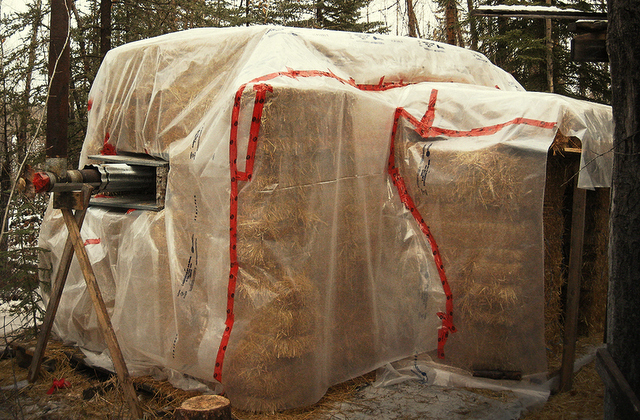 The final step was to encase it with house wrap.

I hope you’ve enjoyed Cud’s story and been inspired by it as much as I have been. To me the message is that money doesn’t have to hold you back from your dreams, only fear can do that. Like Cud, have a dream and boldly set out to make it happen. Fortune favors the bold, and things will fall in place!
And if they don’t, you’ll still have memories of an adventure that you’ll treasure forever!

Either way, you win!

Hardships in trying and maybe succeeding or maybe failing are never our enemy. Boredom and un-lived life are!

Previous Dodge Sprinter Conversion
Next Extreme Vandwelling! Winter in the Yukon in a Straw-Bale Covered Van