Cooking with a Solar Oven

Cooking with a Solar Oven 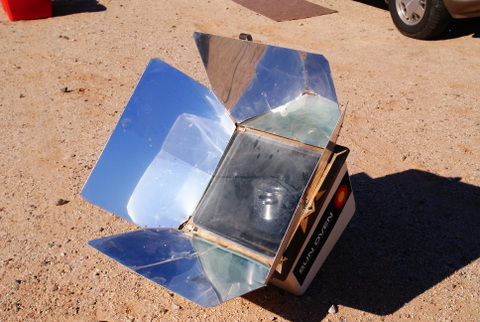 When I first moved into my box van, I quickly realized that I had to do my own cooking, or the cost of eating-out at restaurants would eat-up the savings of living in the van. So I bought a Coleman propane stove and started cooking my own meals. But I really missed having an oven.  I love cornbread and chili, some frozen pizzas are delicious and cheap, and fishsticks are a comfort food from my childhood. But they all (along with many others) require an oven. I tried a Coleman folding camp oven, but it took a lot of propane to operate, made the van hot in the summer, and it was hard to regulate the temperature and get foods cooked right. I had more failures than successes so I soon gave it away and learned to live without an oven.

It is many years later and I still miss an oven. So a friend suggested that I get a solar oven, and the light bulb went on, what a great idea!! I spend my winters in the desert Southwest so I have an abundance of sunshine making a solar oven the ideal solution for me. So I started doing some research. The very best thing I did was join the Yahoo solar cooking group (http://groups.yahoo.com/group/SolarCooking/). If you have any interest in solar cooking, join this group now! There are many people there who use many types of ovens and are very eager to help newcomers get started with solar cooking. In their photo album, there are hundreds of different photos of how people made their different solar ovens. There are also many do-it-yourself plans on the web for making your own oven. Some are very cheap and easy, others are very elaborate and more difficult. (here is one of the best easy plans: (http://www.backwoodshome.com/articles/radabaugh30.html). 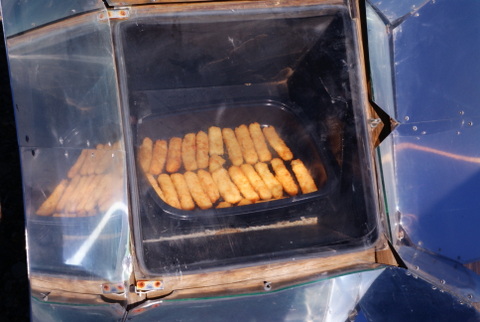 I also looked at commercially available ovens such as the SOS Sport (click here: http://www.solarovens.org/)  and the Global Sun Oven (GSO or Sun Oven) (click here: https: //www.sunoven.com/. I was very impressed with both of them, but the video on the Global Sun Oven site (sunoven. com) really sold me on it. While they are both very good ovens and work extremely well,  I strongly preferred the GSO. Its large reflectors gather more heat from the sun, which allows the GSO to attain a higher temperature than the Sport. In good sun the GSO can get up to 400 degrees. Also, its large, self-leveling food tray allows it to be tilted at any angle which is especially important in the winter when the sun is low on the horizon. For those reasons I decided I wanted a GSO, but they are expensive so I had to put off buying one ’til later when I could afford it. Well, the next week I was driving along and saw a garage sale with a GSO set up in it. So I slammed on my brakes and pulled over. It looked exactly like a GSO but it said Burns Sun Oven on the side, which confused me, but, not enough to keep me from buying it! He wanted $60 for it, so without any hesitation I bought it. Later I researched the name, and it turns out that a man named Burns had started the company and the early models had his name on them. That means my oven is 10-15 years old. Some of the wood is drying, and there is a very small amount of rust on some of the hardware, but it is 100% serviceable and it should last me another 15 years. And best of all, it cooks great food!

Biscuits cooking. They turned out great!

Everything I had read on the web said that food actually tasted better when cooked in a sun oven, but I thought that was just overzealous hype. It’s not! Food actually tastes better when cooked by the sun! Maybe it is the slow, even heat from the sun, but whatever the reason, it really is better. I took the oven to a gathering of members of the vandwellers yahoo group, and we used the oven almost every day to cook all kinds of food and everyone there went away wanting a GSO. We all agreed that the food just tasted better. We made a batch of brownies that was the best I had ever eaten anywhere. It turns out that the solar oven is a very good mimic of a crock pot slow cooker. It makes great soups, rice dishes, stews, pot roasts, and meat loaf. Anything you would make in a crock pot will turn out great in a GSO. We also used it for breakfast, making eggs and oatmeal with it. 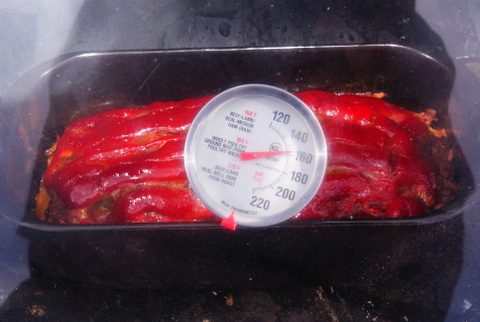 My first two pound meatloaf almost done. I put it in the oven at 11:30 am and by 2:30 pm it hit 180 degrees and I called it done. It was March 14, in Pahrump, Nevada. The outside temperature was 73 degrees with partly hazy skies. There was a light breeze the whole time.

Needless to say, I am in love with my GSO. Here’s why:

Here are some tips on using a solar oven:

The two pictures below show the ingenious levelor tray that keeps your food level no matter how it is tilted toward the sun.

In this picture, the oven is laying flat on its front side and even at this extreme angle your food is still level. Your food stays level no matter how you adjust it for the sun angle. 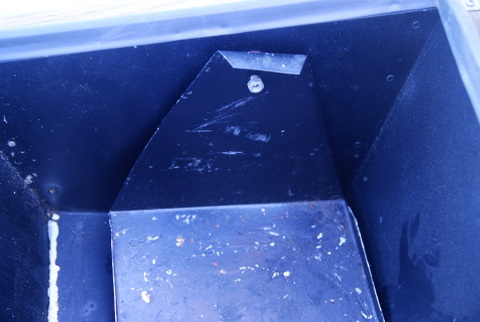 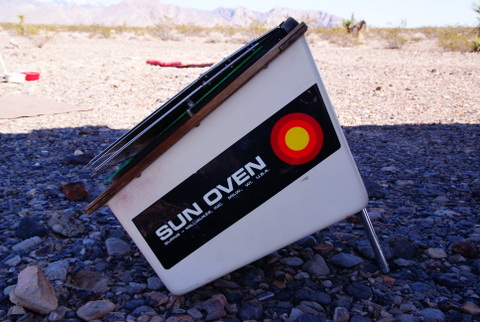 The leg mounted on the back of the oven easily allows you to raise and lower the angle of the oven to the sun.

In the winter when the sun is low on the horizon, you want it tilted all the way for maximum heat. In the hot summer we may not want any tilt in order to lower the temperatures in the oven. 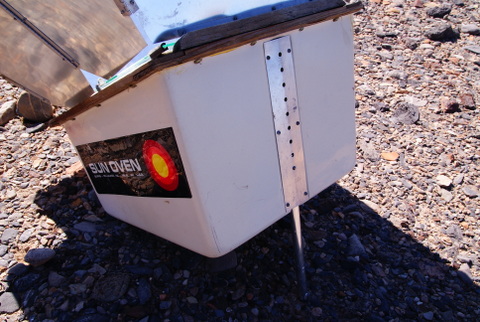 Here you see the back of the oven with the leg. It’s very easy to raise and lower.

Another advantage of the GSO for the vandweller is how small they fold for storage. 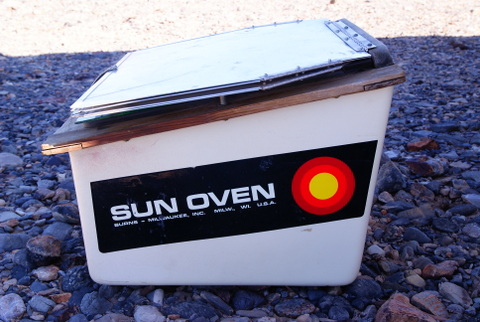 This picture shows the reflectors folded flat, the leg pulled in, and the oven ready to travel. It fits snugly under the bed of my campe