Converting a Kia Sedona Minivan for Travel and Living

Converting a Kia Sedona Minivan for Travel and Living 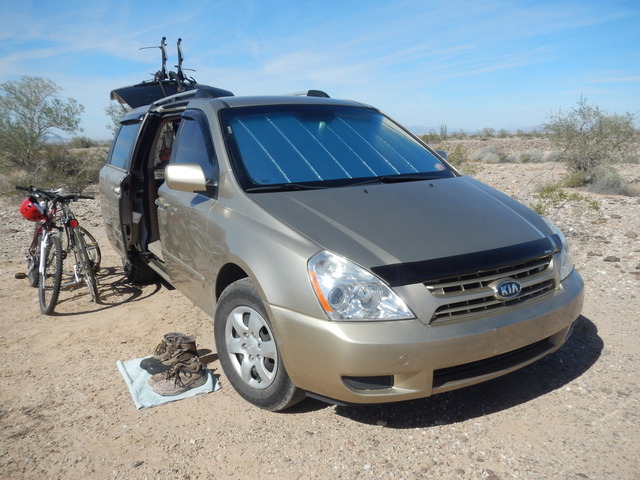 Minivans make great homes for nomads! They’re easy to drive, can go many places and get good gas mileage. This Kia Sedona averages between 20-23 mpg.

Did you ever consider living or traveling in a Kia Sedona mini-van? It’s not as crazy as it sounds! One of the best things about my website is that I get to meet so many great new people and see what they are living and traveling in. A few weeks ago I made a new friend, Jim, who has just started traveling in a Kia minivan and so far is loving it! He was showing me around what he had done and I was very impressed! It’s a perfect example of how a tiny space can become a great home, so I asked him if I could make a video and blog post about it and he graciously agreed. There is a link to the video on the bottom of the page. 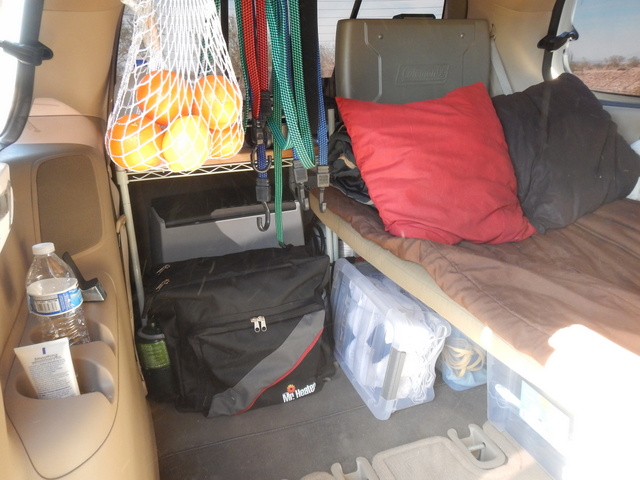 Jim’s made no permanent changes to the van, everything, like the cot, can just be taken in and out. For organization he uses plastic totes and bags of various varieties and sizes. Because he’s been visiting a son in Colorado in the winter, he’s carrying a Mr. Buddy Heater.

What makes his conversion so unique is that he has done zero physical changes to the minivan; after this trip, he can switch it back to a typical soccer moms minivan in just a few minutes! All he did was take out the back seats and buy specific camping gear that worked perfectly with the Kia. That’s important because there are a lot of people who don’t have the time, skills or tools to do any real construction on a van so they need a nice conversion that makes them comfortable but requires no building–this van is perfect for that! 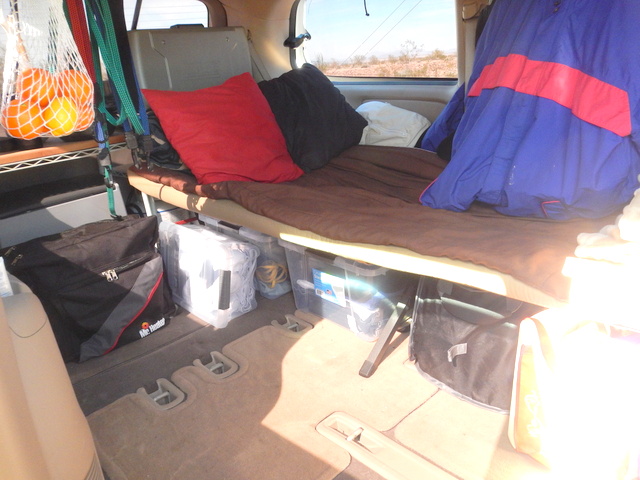 Getting a good nights sleep was a top priority, so he bought a good quality Cabella’s cot and and an inflatable sleeping pad and it’s been very comfortable.

It’s also perfect for people on a tight budget or who aren’t really sure if they want to live or travel in a van. The Sedona is a popular minivan but also one of the cheapest so they are easy to find and very affordable. You can easily take the seats out and go on a few trips to start getting an idea if vandwelling is really for you If you decide it is, then you’re ready to move in and start traveling, if it turns out you really don’t like it, then you may have lost a little bit of money on the camping gear, but not all that much. 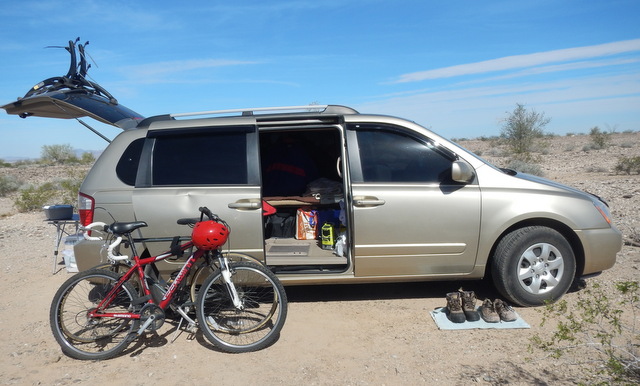 He had a health scare that made him reevaluate his life and part of the changes he’s made is dedication to his health. Riding his bike for the health benefits and to save some money is part of that.

A few years back he had a health scare with his heart and that made him really stop and reevaluate his life. He concluded that there were a lot of places he wanted to see and things he wanted to do but he hadn’t done them yet; facing his mortality forced him to take steps to make it happen. Flying is expensive, and you miss out on some of the best parts of the trip, so he decided to use the minivan he already owned because it was big enough to be quite comfortable, but small enough to get good gas mileage. Jim averages about 20 MPG but gets up to 23 on the highway. For as much comfort as it gives him, that’s pretty darn good. 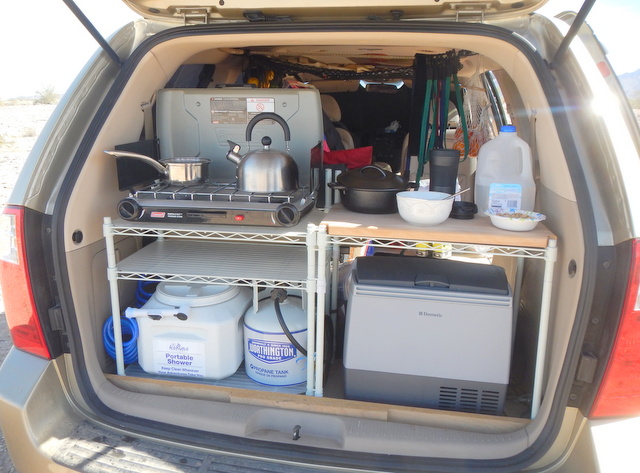 A top priority for him is eating healthy so a pleasant kitchen was essential. He’s got it! 1) a Coleman 2 burner stove, 2) Dometic CF18 compressor fridge, 3) metal shelf units for organization, 4) 1 gallon propane tank for economical cooking, 5) Big Kahuna Portable shower for dish-washing and bathing.

Essentially Jim converted the van like he was going on a long tent camping trip but instead of setting up a tent outside he used the van as a rolling steel tent. That gave him a lot more security and safety with the steel walls and solved nearly all the problems of car-camping and sleeping on the ground in a tent. It also saved him the hassle of packing and unpacking the van at every campsite. He gets all the advantages of camping, but none of its disadvantages. 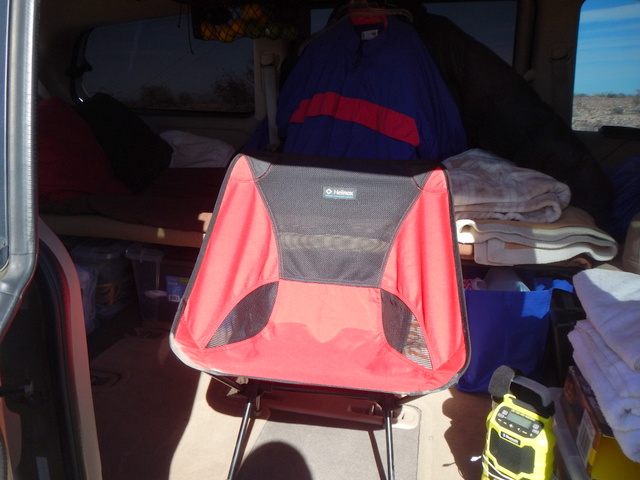 One of the keys to living in a van is a comfortable places to sit both inside and outside the van. During good weather you’ll want to be outside a lot, and during bad weather you’ll be forced inside. This Helinox camping chair is perfect because it’s very comfortable, and very light so it’s easy to take inside and out. It’s low enough so he doesn’t hit his head in the van and then packs down very small if he needs the space.

The first thing he did was take out the back seats which was easy because they are designed to be easily removable. Next he added the camping gear he needed to be comfortable. Basically, the same items he would have bought had he been going tent camping, but he didn’t need a tent!
This is the camping gear he’s carrying. The links go to Amazon and if you use them I’ll make a small amount on your purchase and it will cost you nothing.

A quality cot. His is from Cabellas, but here is another that I’ve owned and recommend from Amazon:  TETON Sports Outfitter XXL Camp Cot

Little Buddy Heater: His sons are in Colorado, and he travels there in the winter so he needs a good heater.  Mr. Heater Buddy 4,000-9,000-BTU Indoor-Safe Radiant Heater

Folding Camp Toilet: He started with a porta potti but it took up too much room. Now he’s going to try a folding toilet from Reliance. Reliance Folding Portable Toilet 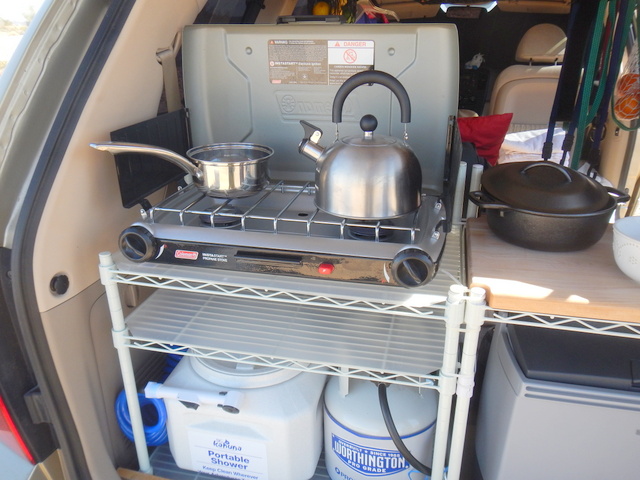 He found these 24 inch wide metal shelves at Home Depot and rather than have them on top of each other, he has them siting beside each other. They fit perfectly. His kitchen works extremely well for him. 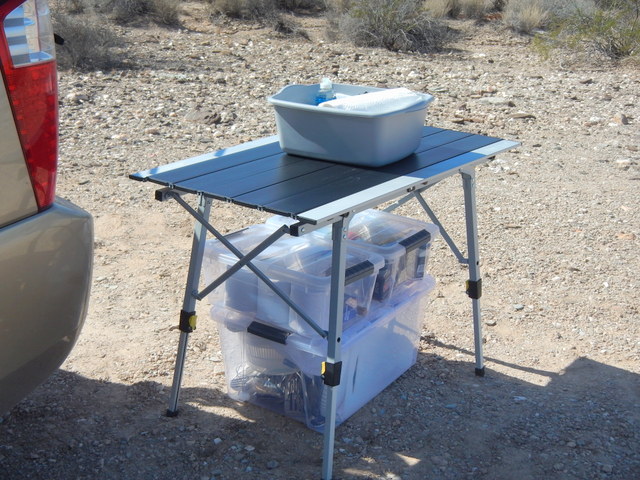 The one thing he couldn’t fit inside the Sedona was a counter-top so he got this folding table and it sits outside the back hatch. He does dishes in the tub and most of his cooking essentials fits in the two plastic totes below it. Perfect!

After his health scare he was determined to eat better, but how could he cook in a minivan? He needed a good kitchen to make it enjoyable to make quality, healthy meals and found the perfect solution. During good weather he can cook from outside the back hatch and in bad weather he has a butane stove he cooks inside on.
Coleman 2-Burner Propane Stove: Coleman InstaStart 2-Burner Stove

Butane Stove: to use inside during bad weather or as a third burner Butane Camping Stove

Dometic CF 18 Fridge/Freezer: 12 volt Compressor fridge/freezer, this is a very small fridge or freezer but enough for one person. It’s 12 volt and can easily be powered by a single battery being charged by the alternator.  Dometic CF-018Portable Freezer/Refrigerator 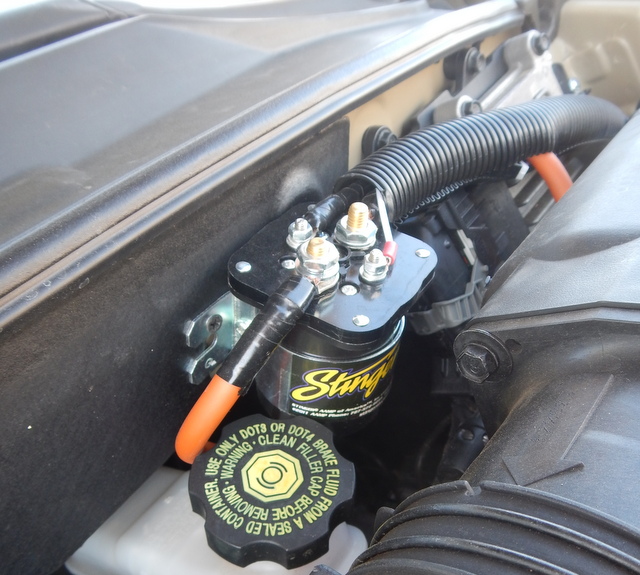 He has an isolator between the starting and house battery so he doesn’t accidentally drain the starting battery dead, leaving him stranded. 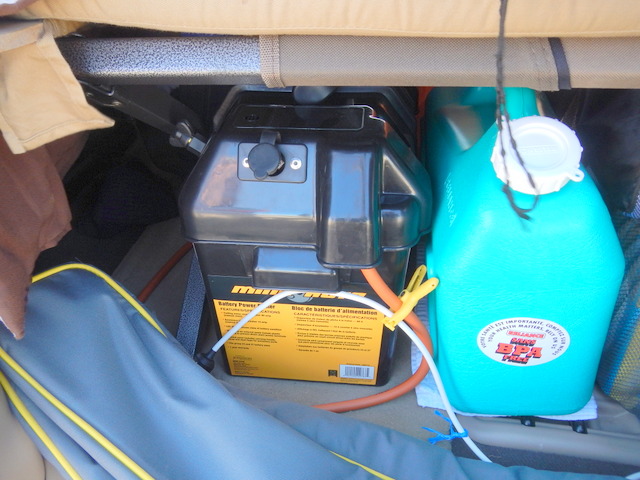 His house batttery is inside this Minnkota battery box. It includes two built-in cigarette lighter sockets and a battery monitor.

One thing you’ve got to have is some electrical power for your phones, tablets, laptops and lights. He found a simple and cheap solution by getting a marine battery and charging it from the cars starting battery. He uses an isolator to protect the starting battery from going dead and bought an inexpensive marine battery as a house battery. He used a Minnkota Battery/Box-Power/Center MinnKota Battery Holder-Power Center

to hold the battery and it also gives him a two built-in cigarette lighters sockets and a voltmeter to monitor the battery.
I hope you enjoyed this tour of Jim’s Kia as much as I did and hopefully you found some ideas to help you with your build and who knows, maybe even some inspiration!
I’m making Videos on my good friends James and Kyndal’s YouTube Channel. See them here:
https://www.youtube.com/channel/UC_W_E5SFCxwpSOaqMjOOBTg
Find the video I shot of Jim’s Sedona here:
https://www.youtube.com/watch?v=cjm7SbK4QiA
If it doesn’t appear above, click or cut and paste this link into your browser:
//www.youtube.com/watch?v=cjm7SbK4QiA

Previous Convert Your Van from a Thrift Store.
Next Converting a Van from Wal-Mart & Thrift Stores with Plastic Totes, Drawers & Build-it-yourself Furniture