Camping on the Medicine Wheel Scenic Byway: 14A in Wyoming

Camping on the Medicine Wheel Scenic Byway: 14A in Wyoming 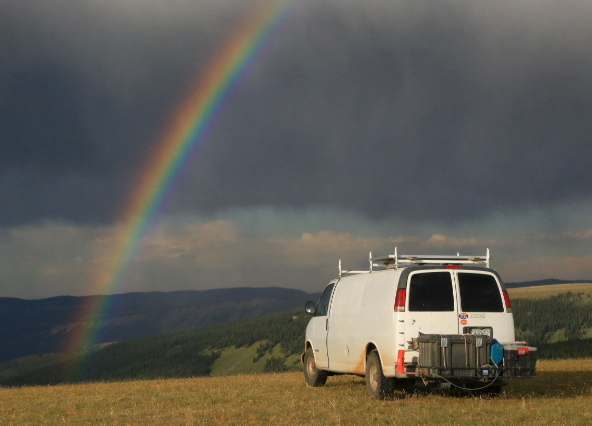 My camp on the Medicine Wheel Scenic Byway. I’ve been lucky this summer to get many great rainbows, but this one was special because it came with a great view!

In my last travel post I told you about my trip from Cody, WY and climb up the “Oh My God Hill” into the Bighorn National Forest, then we got side-tracked on talking about climbing hills. In this post I’ll tell you about my campsite in the Bighorn NF after climbing the hill. Soon after you top the “Oh My God Hill” you come to a wide, broad plateau with mostly rolling hills that’s very pleasant and inviting. One of the attractions you’ll see along the way is Medicine Wheel National Monument. It’s an ancient Native American sacred place where they have laid out a huge Medicine Wheel on the ground out of stones. As you may know, the Medicine Wheel was a sacred symbol to most Native Americans in North America and this is one of the largest and best preserved of all of them. Learn more about it here:  https://en.wikipedia.org/wiki/Medicine_Wheel/Medicine_Mountain_National_Historic_Landmark 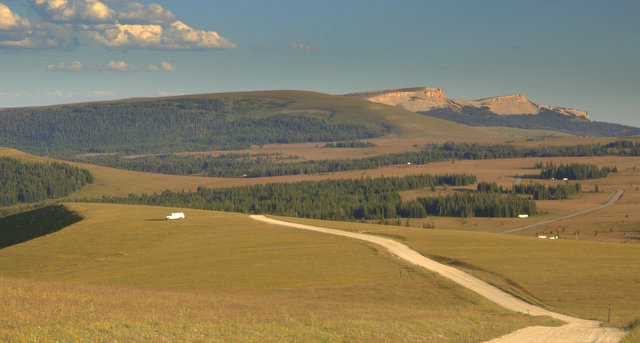 This is a wide shot of the ridge I was camped on. In the distance you can see the white dots, those are the many RVs camped below me; there are many more in the trees where we can’t see them. This is where a small vehicle pays off. None of the big RVs could come up here, so I got a great view all to myself–and better internet. None of the ridge was level. My Tri-Levelors really paid off here.

It was late in the day and already getting dark by the time I got there and the heat and the climb had stressed me out so I just passed-by the Medicine Wheel thinking I would come back the next day. But I never did, which I do regret. Writing the guide book had created a sense of urgency to keep moving and writing which I don’t like to have in my life, but there it was. I still had a lot of ground to cover and so I just pressed on. 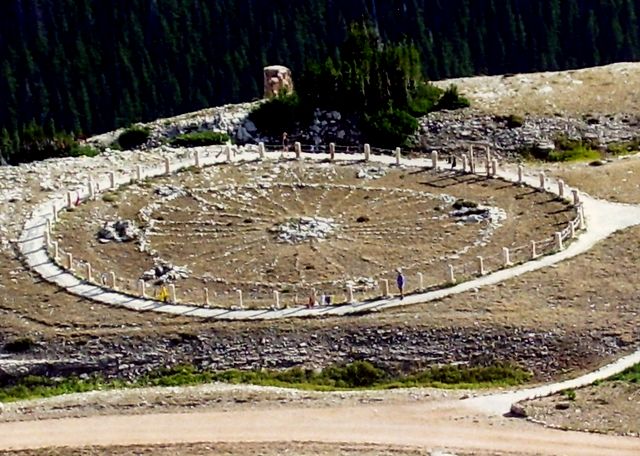 A photo of the Medicine Wheel from it’s Wikipedia page.

As soon as I got up on top of the hill and was on the Plateau I turned on my Verizon JetPack and Wilson Sleek to see if I could get any signal. To my total surprise I had a fairly strong 4g signal almost right away and it held steady the whole way. According to my Benchmark Atlas, there was a spider web of Forest Roads that led off of 14A (which is the Medicine Wheel Scenic Byway) into the Bighorn National Forest so I took what looked like the largest road, and also had the most smaller roads leading off of it. My experience has been that’s where I’m most likely to find a good dispersed campsite.
I was very surprised by the large number of 5th Wheels, Travel Trailers and Class A RVs that were camped along all the roads. Most of them showed no sign of people being around and they had obviously just been brought up the hill and left there, probably only being used on weekends. They filled all the most choice camping spots so I just kept going.

Here I’ve walked over to the edge and I’m shooting down at the valley below me with all the RVs. The Bighorn NF has a spiderweb of Forest Roads all through it with hundreds of nice campsites everywhere.

I drove for probably 5-8 miles and the RVs were everywhere, finally I got a lucky break. I came to an intersection with one road going up a hill said something like “Sheep Mountain: steep, rough, winding road next 5 miles.” When I saw that, I knew I was almost home! I could see up the road and it wasn’t all that bad, but it was bad enough to keep the RVs off it—that’s my kind of road!! So I headed up it. 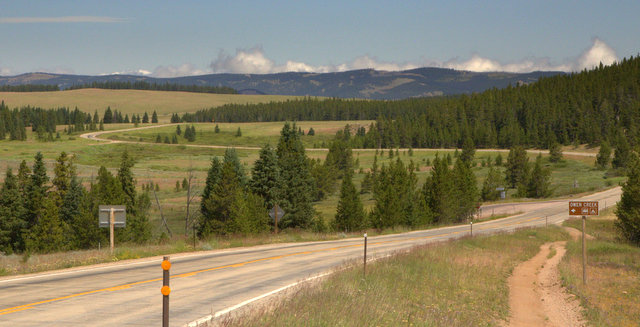 The northern part of the Bighorn National Forest is a high plateau with a nice forest in it. The mountains are really just rolling hills as you can see in this shot.

I went a mile or so up it and it turned onto a long ridge that had a mild hill but was probably 100 yards wide with low grass on both sides. I decided I could camp there and I pulled off the road and went back maybe 30 feet trying to get as level and just stopped, that was camp! And it was a good camp! I used my Tri-Levelor and blocks to get as level as I could; it wasn’t perfect but I had no problem sleeping. Get one here from Amazon for only $15: Camco Tri-Leveler: Best Leveling method for Vans and RVs 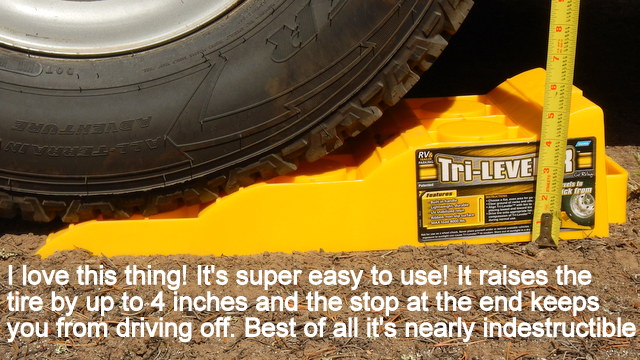 I was high enough on the mountain I had a very good Verizon 4g signal and amazing views all around us. I could look down at all the RVs camped in the meadows below us and thought “Yeah, those were nice spots, but I would rather have this one any day!” Cody and I walked up most of the way to the mountain above us and back for our evening walk and then an evening thunderstorm rolled in and brought some wind and rain. If you’ve spent much time in the Rocky Mountains, you know that is very typical behavior. Fortunately it also brought a very nice rainbow which I got some nice shots of. That night we had very little traffic, just a few ATVs caught in the rain. The next morning we had a bit more but not much, mainly ATVs. Cody and I took our walk and headed out to finish our trip.
This part of the Bighorn national Forest is not really tremendously beautiful. It is a nice forest with many meadows and streams but the mountains are really just rolling hills. It’s a very nice place and I can see spending your vacation time here if you lived nearby but compared to all the stunning beauty that’s not that far away, I’d rather go there any day. 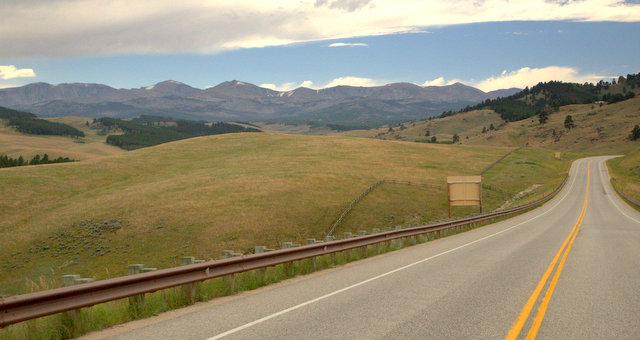 Another typical shot of the rolling hills in the northern part of the Bighorn NF along Medicine Wheel Scenic Byway.

The next morning I packed and left. I wanted to see what the other climb up into this area was like so at Burgese Junction I turned southwest onto Highway 14 and drove it far enough to see what kind of hill it presented and it was much easier than the “Oh My God Hill” on 14A and not nearly as spectacular. Drive it if you need something easier. The drive down the east side toward Interstate 90 was just an average mountain pass in Wyoming, not easier or harder than most, just average. 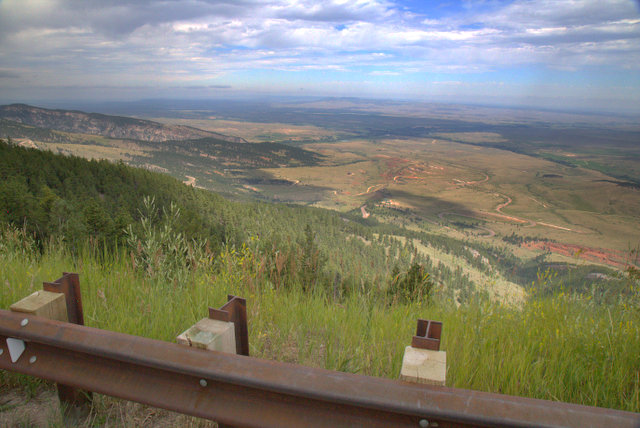 This is a shot down the hill at the high pains on the eastern descent on the Medicine Wheel Scenic Byway towards Interstate 90. If you could see far enough, the Black Hills of SD would be right over there. It’s a typical mountain climb into the Rockies, nearly all of our vehicles can make it no problem.

All in all, that’s how I’m going to describe all of the northern part of the Bighorn National Forest, just average and nothing special. There are only three reasons to consider gong this way:

Other than those three things I’d say skip it and take the southern route, Highway 16, into the Bighorns which is much prettier. In my next post I’ll tell you all about that.

Thanks for shopping Amazon from these links. Even if you don’t buy these items, anything you do buy I’ll receive a small percentage–and it won’t cost you a thing!

I got this great rainbow in my camp along the Medicine Wheel Scenic Byway.

Previous Camping on the Cloud Peak Skyway on US 16–Bighorn NF
Next Campsites in Palmer and Talkeetna, Alaska