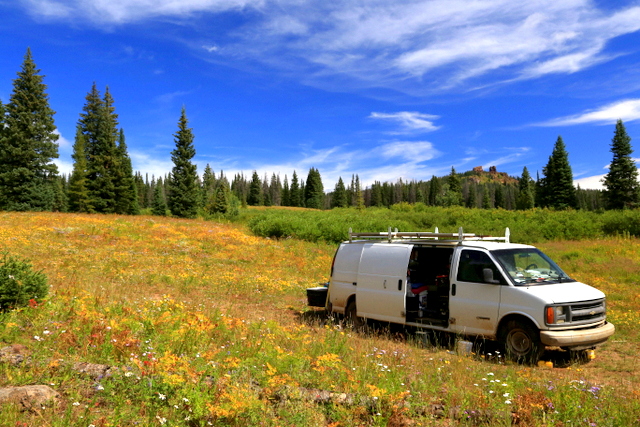 I know it’s hard to believe but I’m still not through telling you about my summer travels in 2015! I drove so much and camped in so many places I couldn’t keep up with the posts. Then Fall got here and there were lots of other things for me to post about so they just got pushed aside. But!! It’s starting to get hot here in the Arizona desert and I’ll be moving north this week and  start in on a while new series of spring and summer camps–so I’d better get done!!  In today’s post we’ll pick up where I left off which was on the Snowy Range Scenic Byway near Laramie Wyoming and talk about dispersed camping near Steamboat Springs, Colorado.
I loved the Snowy Range because of it’s stunning beauty, but I was tired! It had been a very busy summer of chasing every beautiful place I could find in Wyoming and I was just plain wore out! I really needed to find a campsite which was cool and had great internet so I could just sit and recover. I would have stayed in the Snowy Range except it had zero internet! That rarely happens but it did there and and two days without internet is the longest I could go so I had to move on. But where?

Cody and I on one of our walks through the beautiful wildflowers.

It was the end of August by then and it was hot, I needed someplace at a high enough elevation to be nice and cool and yet it had to have very good internet. Oh yeah … it had to be beautiful too! The the very best place anywhere that fits that description is Colorado and since I was very close to the Colorado border, that made it an easy decision. Now all I had to decide where in Colorado.
I’ve explored a lot of the state but one area I’ve never been to is the area in the center of the state that borders Wyoming. The largest city there is Steamboat Springs and I’d often heard how beautiful it was but it was never along my route so I’d never been there. Now was the time so it was my destination! It took about half a days drive to get there and it was just as beautiful as I had heard. I came at it from the east on Highway 40 and to get there you climb up onto the Rabbit Ear pass which is at 9426 feet. From the east it’s a fairly long, gradual climb so it’s quite easy, but on the west side of the pass it drops hard and fast on a very long 7% grade down into the town of Steamboat Springs. I dropped down into town and stopped at the Public Lands Information Center there and got a MVUM. I asked about camp sites and especially one with a strong Verizon signal and she said the best signal was up on Rabbit Pass. So I filled up on water and got supplies and headed back up the long hill. 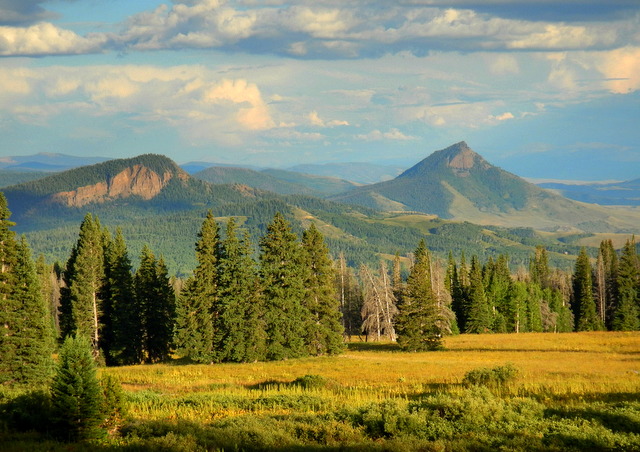 This was our view through the front windshield, not bad huh!?

Rabbit Pass is a fairly long, flat plateau and when I got up there I got out my Verizon JetPack and started watching for a signal. I came on an area with 4 bars of 4g and that was so great I pulled over and got out my maps searching for a nearby campsite. I located a Forest Road that went pretty far back and headed down it. As is my usual habit, every time I came to a turnoff onto a smaller and worse road I took it. Eventually I was on a road that no RV could take but was easy for the van. I headed up it and came to a pretty bad rock field–I’m certain the van could have gotten through it but I found a nice campsite just before it so I decided to call that home! And what a spectacular home it was!
It had some really big trees but mostly it was open meadow looking down a slope at pretty mountains in the distance. Although I was at 9900 feet the temperatures were perfect so being in the sun was very pleasant, but best of all the wildflowers were either at their peak or just slightly past it–they were spectacular!! Almost every where I looked there was a carpet of yellows and red and even a lot of the pretty purples of Fireweed in bloom.  Some of them were starting to fade so it was past peak but it was still lovely beyond description. 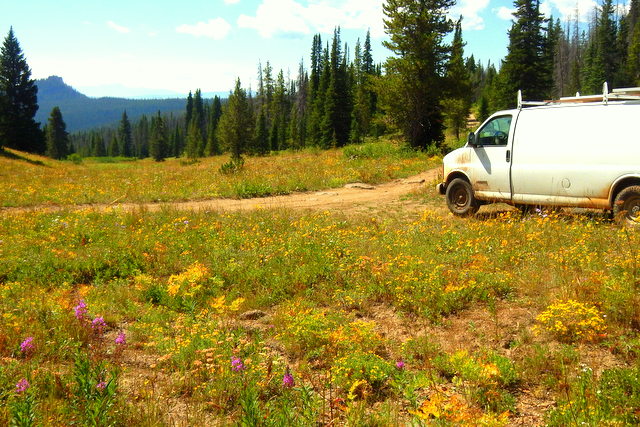 Looking down the mountain.

During the month I was there I probably made 6 trips down into town and I really liked Steamboat Springs. You have to remember that it’s a tourist town and so it’s full of “tourist stuff” for sale and visitors and traffic all the time. Some people hate tourist towns because of the consumerism, traffic and crowds but I tend to like the energy they have. They’re full of alive people who are coming and going and having fun and adventures.  Some people prefer “sleepy” towns with no crowds and nothing going on, but not me. I’d much rather put up with extra hassles and feel the energy of people who are living their lives instead of people who are enduring their lives and using the least amount of energy they can doing it.
I judge an area by how many pictures I take and towns by how much I enjoy just sitting and people watching the people and their rigs. I took lots of pictures in camp and loved people/rig watching in town so I give Steamboat Springs an A+! 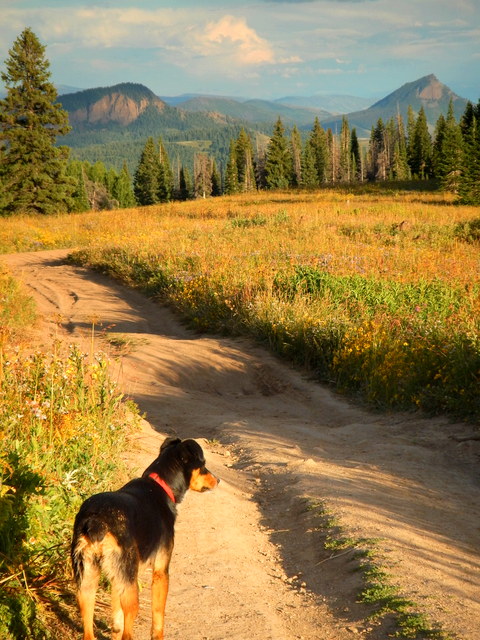 I stayed there for about a month working and relaxing. The walking was very pleasant so Cody and I went on lots of walks. I worked and caught up on the website and after about three weeks Judy returned from her summer back East spending time with her new grand-daughter. By the time she got there it was September and at those high elevations the seasons change rapidly. The days were still nice but the wildflowers were all gone and the evenings were getting cool and we knew it was getting to be time to think about our next camp.
I’ll pick up there in my next travel post. 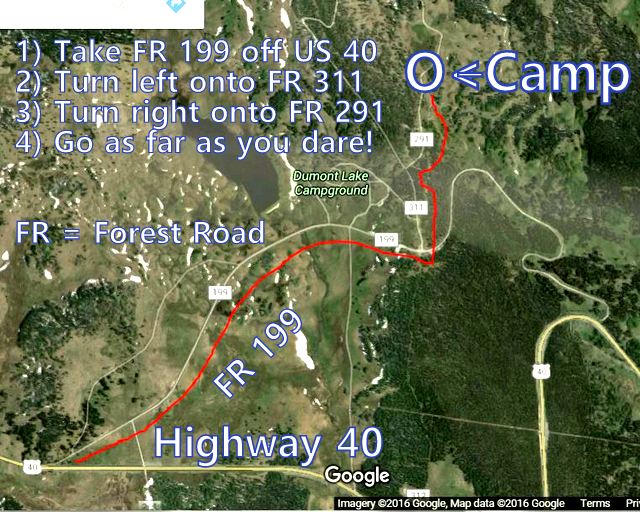 Previous Camping at Flagstaff: A Summer of Change Part 1
Next Camping in Quartzsite, Arizona