A few weeks ago I told you that I had been selected to try out for a reality TV show called “Life on the Road.” This week the director and a cameraman came into camp and videotaped a group of us at the Grand Canyon for the show and I learned more about it. It is for Canadian audiences only and this is a “sizzle reel” that will be presented to the network executives who will then either give the okay for a Pilot episode or will decline it which means it is dead. Even if they give the go-ahead, that still doesn’t mean it will become a series. First it will be broadcast as a Pilot to see if it becomes a series. As of now, I’m not getting my hopes up and I’m assuming it is unlikely it will ever see the light of day. 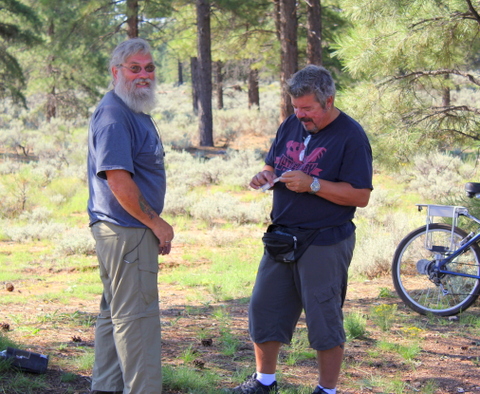 Here is the director wiring me for sound. I’m on the left! My thanks to Dan who took all these photos.

When I told you about this a few weeks ago many of you had a very negative reaction, you were certain that the TV people were greedy, rotten jerks who only wanted to make a buck and would make us look like drunken, crazy bums. I didn’t think that was the case at all. But I was wrong! 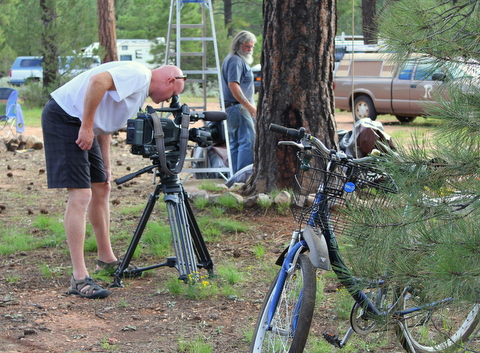 The cameraman lining up a shot.You can’st see them, but he actually has horns and hooves!

On my God, you were so right and I was totally wrong!!!! The director and cameraman who showed up were evil monsters! They were demons in the disguise of men. They handed me a script and told me to memorize it and it made me look like a buffoon who was out to steal, kill and rape everyone in sight! First they wanted me to rob a convenience store and then for lunch I was supposed to dine and then dash at the restaurant. They even wanted to bring in an actor in a Forest Ranger uniform and have him beat me up! It was horrible, horrible I tell you! I finally had to pull out my .357 magnum and threaten them with it to get them to leave.

Not a word of that is true, just the opposite is!! They were two of the nicest guys I’ve ever met! They couldn’t have been more friendly and professional. They told me some of their resume of the shows they have worked on and it was remarkable. They worked on some very impressive shows and were extremely good at what they do. They told me to just relax and be myself that they wanted to present my life honestly and without slanting it in any way—and I totally believed them. There is no doubt in my mind that if it goes forward only good will come from it. The more I got to know them and tell each other our stories, the more confident I became that they were outdoor people who loved to travel and were totally open to counter-culture lifestyles. Beyond that, they are Canadians; they are genetically incapable of being rude!

Judy being interviewed. They just asked the standard questions we have all been asked a million times when people find out we live in vans.

Because they had flown in late the day before, they only one day to do all the shooting. That made for a very busy schedule. The first thing we did was hitch up the trailer and go take shots of me driving; after all, you can’t have a series called “Life on the Road” without shots of the van and trailer on the road! Mostly they went ahead of me, set up the camera, and then I drove into the shot. There was a big mud-puddle near here so they also got shots of me running through it and soaking the van. I have new mud tires so I gunned it inside the mud puddle and threw mud everywhere for affect. I’m hoping that is a cool shot! 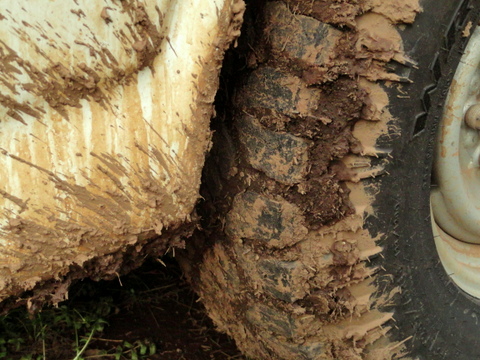 My new mud tires doing their job! The Arizona monsoons have made getting stuck a daily hazard!

Of course they had a top-of-the-line professional video camera, but they wired the whole van inside and out with GoPro video cameras for “atmosphere” shots. While we were driving along one of the suction cups came loose and the GoPro blew off at 60 mph, I watched it bounce all around and land in the middle of the road. So we turned around and went back to pick it up. It was still recording and looked like new! They weren’t surprised at all and said that was normal for a GoPro. (When I saw that I said to myself I had to own one, and you know what, now I do! Best Buy had them on sale so I bought a GoPro Hero 3 Black Edition, and so far I am in love with it. That means I have to go have some adventures worthy of an adventure video camera!! (Now, I need to find cheap and very easy video editing software. Does anyone have any recommendations? The more powerful the better but reasonably fast, stable and easy to use are my highest priority. What do you use?) Find the GoPro on Amazon.com here: GoPro HERO3: Black Edition 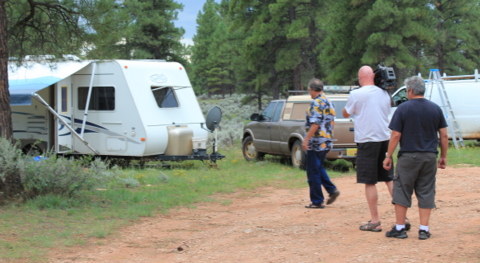 Randy going to be interviewed in his nice travel trailer.

When we got back to camp they took shots of me setting up and in camp and interviewed me with questions and answers. There were 8 of us in camp and 5 of them (3 males, 2 females) had agreed to be interviewed, so when they were done with me they interviewed them. By then it was getting late so we ran into the Grand Canyon and took some videos of me driving along the Rim and of me standing on the Rim. They called it the “Hero” shot, but that seemed like a pretty unlikely description of me. Unfortunately it wasn’t a very nice day so I don’t think the Canyon was at its prettiest.

Getting an atmosphere shot looking over the edge of the Canyon at a 1000 foot vertical drop. He should have gotten hazard pay!

That evening we built a fire and they videoed us siting around it. One of our group, Laurie, is a professional singer and she had written a song about being on the road so she sang it for us by firelight (and a light they had set up to fill-in). With a little luck it could be the theme song for the Series! My good friend Randy (of the Mobile Codger blog http://mobilecodgers.blogspot.com/) recited one of his famous Poems . 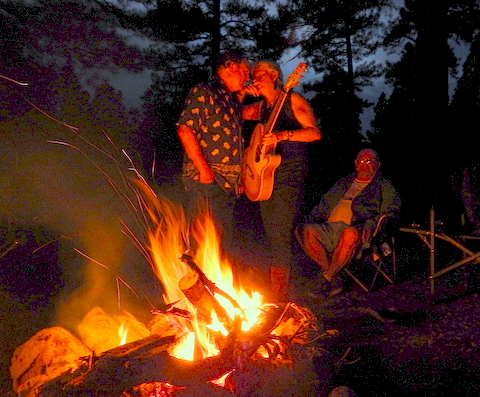 Randy and Laurie around the fire. That’s Curtis behind them. He was also interviewed.

And then they drove back to Flagstaff to fly out to their next , I mean the other people who might be on the show. They were on the go all day and they were working hard! So I don’t envy them jumping on a plane just to do it all over again! As they drove away I was 100% confident they were good decent Joes who would give us a fair shake and present us just as we are. Whether it ever makes it on the air, I was glad for the experience! 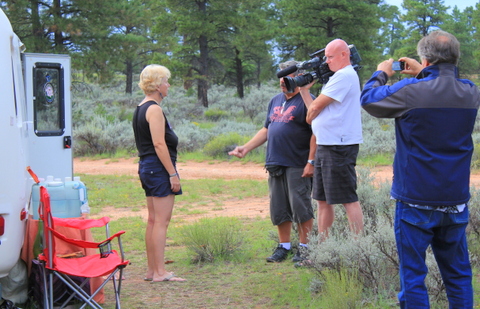 Laurie being interviewed in front of her Burro trailer. Of course Randy is taking her picture!

Previous 2013 Year in Photographic Review
Next How Can I Be So Busy?