4×4 Van Conversion: Sleeping in a Hammock in a Van

4×4 Van Conversion: Sleeping in a Hammock in a Van

(Today we have a guest post by a reader who has something very unusual in his van. There isn’t a bed, he sleeps in a Hammock!)
My van conversion was very easy. I simply HATE vans that are full of stuff all over the place. If a police officer does open my van, it is designed to look very simple and much like a work van so that they cannot think that I am living in it. This has saved me a few times! It came with a third row seat which I moved to the side of the van to use as a couch. It provides a nice comfy view out of the side doors when they are open. 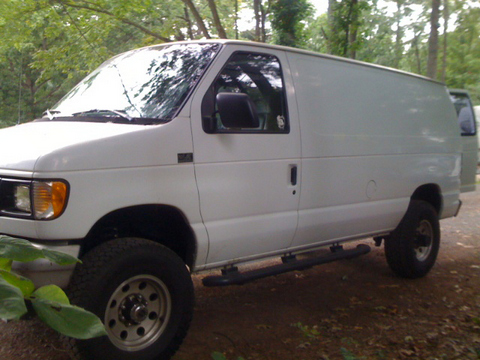 It’s a 1996 4×4 Quigley conversion van and has a very high ground clearance. It has a 7.5 liter V8 Fuel Injected engine with a 6,000 lbs towing capacity. I found this van buried in AutoTrader. The person selling it had not marked it as a 4×4 except in the description of the van so it never came up if you were looking for 4×4 vans. Plus, he only had one bad photo of it that didn’t show it was a 4×4. I decided to go and see it even though it was about 250 miles away. When I saw the van I immediately had a good feeling about it. The engine had been redone 65,000 miles ago. The owner did not really say why he was selling but I got the feeling it was bad on gas. I paid $4800.00 for it. I drove it and it was really bad on gas. It got 6 mpg! 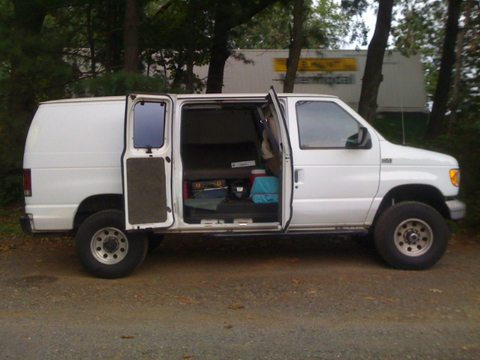 I started to go over the van really carefully. One thing led to another and I found that a squirrel or rat had chewed off one of the rubber plugs that was on the fuel injection intake manifold. This stopped the vacuum working for the air conditioner so air would not come out the front air vents. It cost 89c for a new plug and then the miles per gallon went up to 9 MPG. It had been sucking in air which messed up the whole air/fuel ratio. I wanted to put a new air filter in so took the whole air filter box off. The same rat or squirrel had built a nest in the intake part of the air box, so the engine was hardly getting any air. I cleaned all that out and the MPG went to 11 mpg. So far I cannot beat 11 mpg but want to try and clean the Mass Air Flow sensor when I find where it is.
I have a table and collapsible rain barrel behind the driver’s seat and some tools are also stored there. Anytime I need the table I just pull it out and pull the legs out. It fits perfectly in front of the third row seat when assembled.
Between the seats is the big old cooler which can be opened from the driver’s seat or from the back of the van. Next to that behind the passenger seat is the porta- potty which is covered from view. I am getting a 12v refrigerator like one Bob wrote about and then the cooler will be extra storage.

You can see the plastic shelving to the left of the door. When I (Bob) lived in a box van, I lined one of the walls with plastic shelving like this. The box van was tall so I had them 5 foot tall. They can be any height you want. My box van was lined with plywood so I screwed through the shelves into the plywood to keep them from moving. I spent the extra money on Industrial Plastic shelves so they would be very strong and light.
I think in one of the photos you can see I used plastic shelving from Home Depot (garage shelving that has round pipes between the levels of shelves). This worked great and fit right over the raised area of the wheel wells. I have 4 large containers on the shelves and they are held in place with velcro on the bottom of the shelf and the bottom of the container as well. I also use bungee cords which go around the plastic poles of the shelving to keep everything in place. Because the van is a 4×4 she bounces around a bit, so everything really has to be well stored and tied down. You can buy shelf units from Amazon.com here:
Sterilite Premium Heavy Duty 4-Shelf Storage Unit with Tubular Construction

Opposite the shelves on the other side of the van I have a one layer plastic shelf above the wheel well and lots more storage there which is also covered from view. There is also a Fantastic fan which I use at night if it is warm. It sits in the cooler and blows nicely across the van. Under the third row seat is more storage and I have hand drills and tools plus other stuff under there. 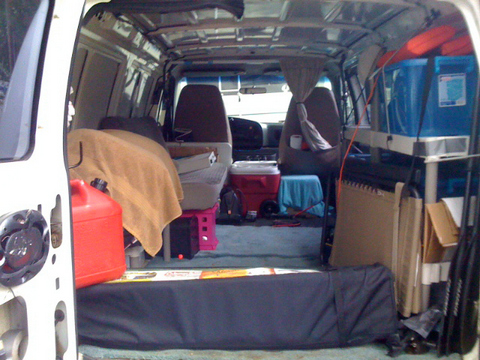 The van from the back door. Where is his bed? It’s a mystery!

I do have roof racks for the van and can store more there if needed but have not had to do so yet. At the back of the van I have a very solid Coleman canopy. It pops right up and is 12 x 12 which I use as an awning type deal outside the van when the doors are open and it is sunny and not too windy. You can buy a canopy like his at Amazon.com:
Coleman 12 x 12 Slant-Leg Instant Shelter

I found some paper blackout blinds at home depot for around $2.00 each. They fold just like proper blinds. I have those up at the windows. They simply drop down to blackout the interior of the van. I have a privacy curtain but I prefer to just use a large fold-able sun shade to cover the front windows and that looks more normal to passers by. You can get the black out blinds from Amazon.com.You should check them out, they are a super-easy way to cover your windows:
Redi Shade 1617 Black Out Pleated Shade 36-by-72-Inch, 6-Pack

The answer to the mystery; he sleeps in a Hammock!! I’ve heard lots of people talking about sleeping in a hammock, but this is the first time I have seen anyone actually doing it!
I guess you are wondering how I sleep in the van as there is no bed. I fitted rope loops, one by the driver side top seat-belt fastener and one diagonally opposite at the rear door. I have a very nice light weight 6 foot camping hammock which fits in a small bag. I pop that out at night and simply hook it up, climb in and it is very comfortable. Actually for some reason I like it more than a bed. In the morning I fold it into the bag and I have tons of space. I also use the hammock outside when a Sunday nap is in order.
I added some more photos. 2 of where the Hammock attaches to inside of the van. The one up by the seat belt has a tent spike slid down into the available hole so that the rope could go around it. There is no place up front to tie anything without the tent spike. 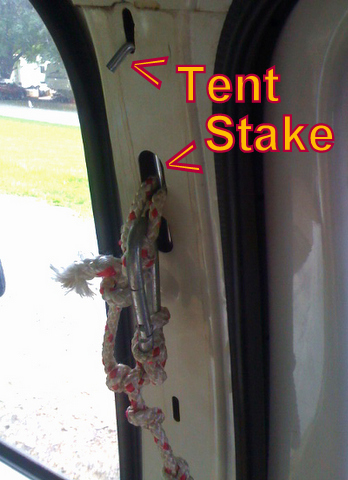 The attachment for the Hammock at the front of the van. It’s a simple tent stake dropped through.

The Hammock is made by Grand Trunk and there is a photo of it in the bag. It holds up to 300 lbs and I am 220 lbs. As you can see the hammock is quite high off the ground when in place so it is not cold. A sleeping bag fits in the hammock if needed. It’s very lightweight and comfortable: like sleeping in zero gravity!!Because it’s made of parachute material it does not get hot in the hammock. (You can buy it from Amazon.com from here:)
Grand Trunk Parachute Nylon Hammock 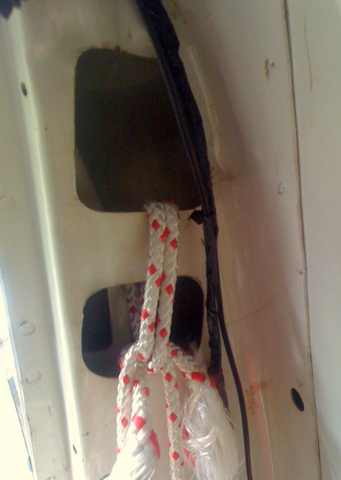 The attachment at the back of the van for the Hammock. With a Cargo Van there is usually something you can use.

I fulltime in my van. I park where other vans are parked in apartment complexes or shopping areas. I prefer being out in very under-populated areas where I do not have to worry about someone knocking on the van to see what is going on.
I have magnetic signs on it with a free 1-888 number that you can get on the internet.
I found if the van has no markings it attracts attention. If I have a company name and phone number on the van then it is left alone. I have tested this theory and last time the van did not have signs on someone called the police because I was parked by a stream in a city area where people jog and walk.
I work as I travel. I like the freedom the van offers and it really lets me go anywhere, off road or on road. It helps that I can use the 4×4 capabilities to get to areas others cannot. That is always a good thing 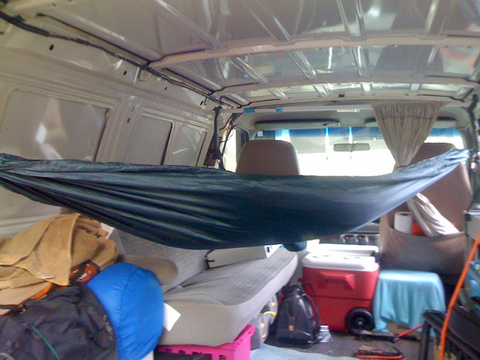 Next A Couple in a Van