How to Live in a Dodge High-Top Conversion Van

How to Live in a Dodge High-Top Conversion Van 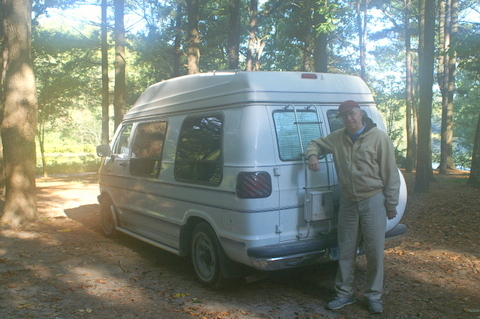 In the summer of 2007 I was lucky enough to join a gathering of some of the members of the Yahoo VanDwellers group who live their vans. There I met Van Guy (picture above). He had bought this nice Dodge Hi-Top conversion van and converted it into a great camper van. I was so impressed with his work I asked permission to take pictures and he graciously agreed, but he didn’t have time to write anything. So back then I wrote this article about his camper conversion for the website and I’m going to re-run it now as a Golden Oldie!! I think (at least I hope!!) my writing and photography has improved since then. 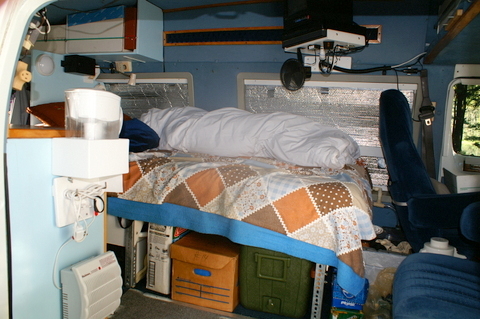 He built his bed behind the driver’s seat with storage underneath. Notice the green cooler and Coleman 2-burner propane stove under the bed. A 13 inch TV is mounted on the wall above the bed. He wired the van for 110 volt for when he was in campgrounds with electricity. On bottom left of the picture above is his 110 volt electric heater mounted on a cabinet.

One question all vandwellers have is how to have privacy and cover the windows. Van Guy used Reflectix to both provide privacy and shade the windows from solar gain. Reflectix has a heavy layer of aluminum foil on the outside and bubble wrap on the inside. It does a great job of keeping the heat from the sun out in the summer, keeps warmth in during the winter, and provides perfect privacy. 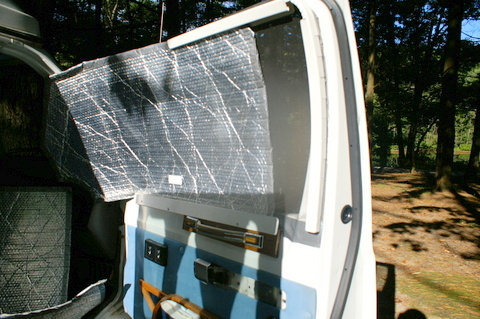 This view of the front passenger door shows how he mounts the Reflectix. He screwed in channels above, below and on one end of the window and just slides the Reflectix into the channel when he wants to use it, and it is easily removed when traveling.

Living or traveling in a van requires very efficient use of all of its tiny space. Van Guy built cabinets along the wall opposite his bed, and near the roof on the sides and across the back. Notice the use of cardboard boxes held in by bungee cords. This helps with organization and keeps the weight of the van down. 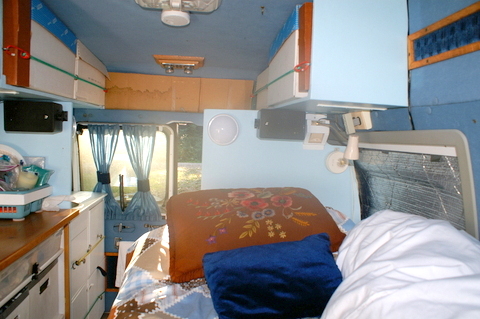 The kitchen counter gives him a large work area where he puts his propane stove to cook. On the wall to the left is his inverter. Above it is the power center everything plugs into. The white object on the bottom left is a water purifier. 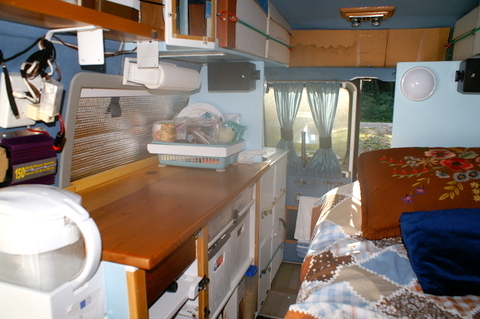 His kitchen works very well. There is enough room for anything he needs to do, and everything is easy to reach and at hand. The sink is behind the partition as we will see below.

You can’t really see it, but between the drivers seat and the bed is his house battery in a sealed box. The box is vented outside for safety.

The passenger seat swivels. In the picture above it is turned around toward the back. Van Guy bought the swivel base from J.C. Whitney and installed it himself. Later he found a cheap one in a wrecked class B at a junk yard. A good reminder (if too late in this instance) to search for parts at junk yards. 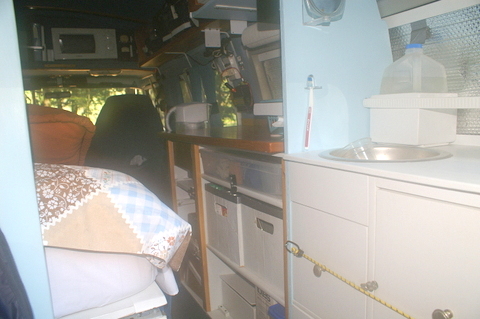 Here is his sink where he does his washing. He originally put in a hand pump but didn’t like it so he just keeps water in one gallon jugs. The sink drains into a 5 gallon water bottle underneath it for easy disposal. 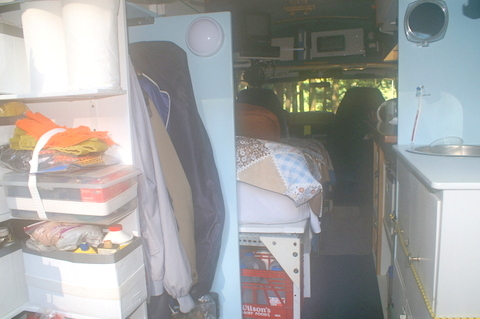 Looking toward the front of the van, you can see a microwave in the storage area above the driver’s area that came with the high-top roof.

You would think that the partition which separates the back area from the front would make the van feel smaller and cramped, but it doesn’t. In fact, it makes it feel more homey and comfortable; counter-intuitive, but true. Under the bed you can see more water stored in a milk crate. 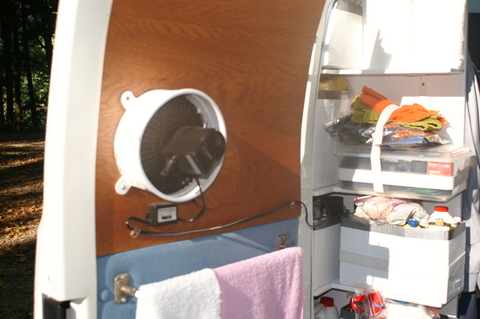 Wanting more ventilation, he mounted a fan in one of the back doors. The window opens outward for when he turns it on.

Previous How to Live in a Conversion Van
Next Ingenious Van Conversion with Simple Indoor Shower!
Table of Contents