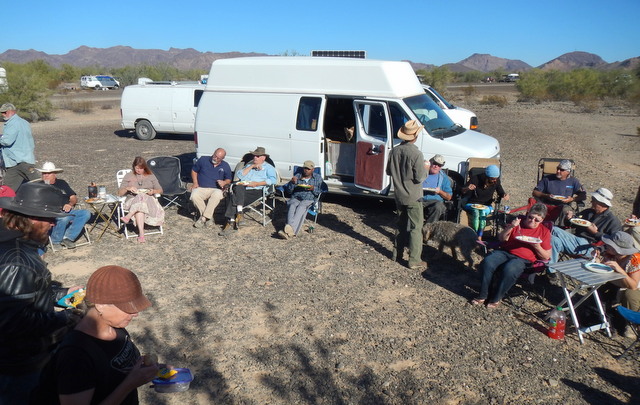 Just a part of the 45 great friends we had over for Thanksgiving!

I’m writing this on the Saturday after Thanksgiving when we had an incredibly wonderful communal meal for all the local vandwellers camped here! I’ve overseen four Thanksgiving meals but I must say that this was by far the best one yet! How could it help but be great when you combine 45 free-spirits living their dream, 32 pounds of turkey, 2 gallons of mashed potatoes, 1 gallon of gravy, 12 pounds of yams and so much other assorted foods, pies and cakes I can’t even begin to count it all!! An incredible time was had by all!! We’ve made a video about it and you can see it here: www.youtube.com/watch?v=fIMHolnepf8 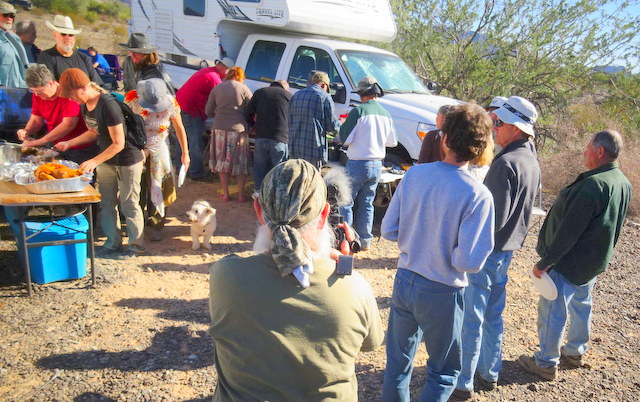 The fruit of out a lot of loving labor, a happy group lining up for a great meal.

While we vandwellers tend to be very introverted and strongly independent, we also feel a need from time-to-time to gather and connect deeply with a community of like-minded souls who understand and accept us just as we are without any judgement–and even more importantly, they ask nothing from us.  That’s what gathering in the Arizona desert means to most of us, a time for tribe, community and friendships.
This was our fourth Thanksgiving meal and they have gotten bigger and better every year. Our first Holiday meal was in 2012 and their were 13 of us–that meal was primarily prepared by my friend Steve. The next year there were 25 of us and I prepared the turkey and  everything else was pot luck style. Last year it grew again and we had 4o people in camp for dinner. My friend Steve prepared all of that except for one of the turkeys which my good friend Bryce made in his large barbecue grill–it turned out great! Steve made an astoundingly great meal, but it was such a difficult job, I could never ask him to do that again. 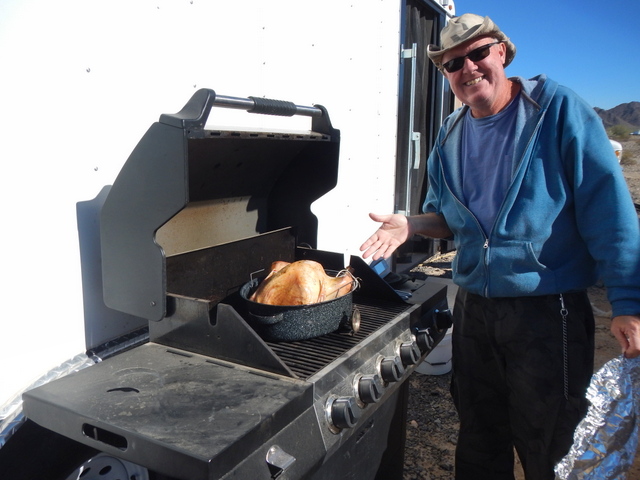 Bryce and his work of art!

That meal was overwhelming in it’s size and difficulty and after it was over I swore I would never do another one. So when this year rolled around  I had no intentions to go through all that work again. After all, I’m retired and more than that, I’m a lazy old fart!! However  my good friends Kyndal, James and Bryce assured me that there was an easier way than we  had been doing by spreading the work around. Plus, all fall we had  been putting together very successful community meals so I knew it cold be done. With their help I relented and agreed to put together another Thanksgiving meal. 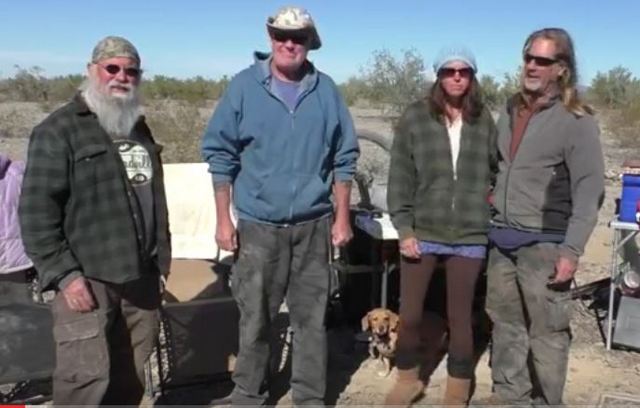 My deepest thanks to Bryce, Kyndal and James for their initiative and hard work. It wouldn’t have happened without them!

This time though, we spread the work load around to many people so it didn’t fall so much on just a few.  The first thing that made it possible was that Kyndal took over the job of going around to everyone in camp to assign them a different food to bring. In the past I’ve done that and it turns into a big job in itself–but this year Kyndal did it all. I still made the mashed potatoes and yams, but that wasn’t hard at all, it was just an afternoons work–which I don’t mind. Kyndal, on the other hand, had to talk to almost 40 people over the course of several weeks and keep a list of who was bringing what. That was the hard part!
Kyndal is the unsung heroine of this story, and I deeply appreciate her hard work! Thank you!! You were my guiding angel! 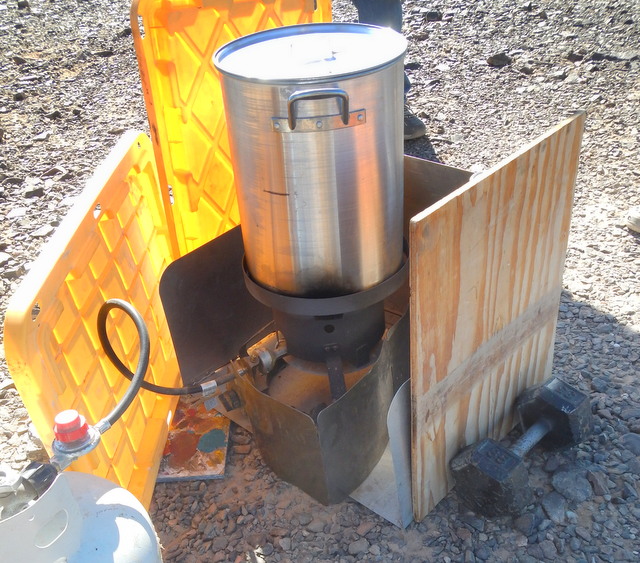 The turkey in the fryer.

Of course I can’t pass up James and Bryce who cooked the two turkeys. Without them there would have been no meal at all! They got together and decided that we really MUST have a Thanksgiving meal and they would be primarily responsible for making it happen. That was an offer I couldn’t turn down so thank you both very, very much. 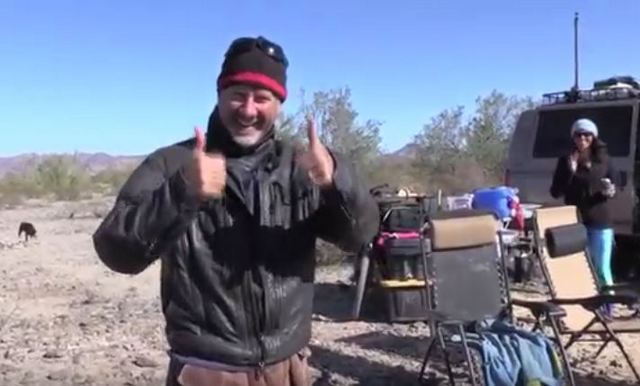 James got all dressed up to drop the turkey into the fryer. He’s just thankful to come away from it with all his skin intact! You can see all the action in the video!

Fortunately for all of us in camp, Byrce loves to cook great meals for large groups and is very good at it! He’s mastered the art of cooking and baking in his large barbecue grill in the middle of nowhere and it turns out exactly like an oven. I’ve watched him make incredible meals in it that were as good as any master chef in the best kitchen in the world! Even they would approve of his meals. But it’s much more than just good food; the love and compassion he puts into it is what makes it such a delight! This turkey was as good as any I’ve ever eaten in my whole life. 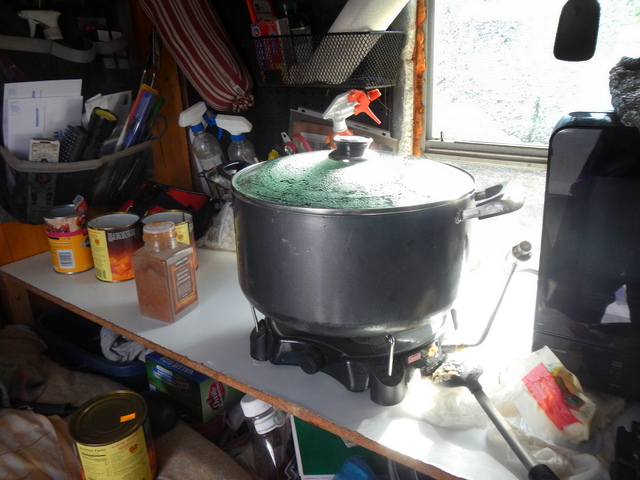 But one turkey wouldn’t be enough for the big groups we have, so last year I bought a deep fat fryer for turkeys and Steve made a turkey in it. It went extremely well and was delicious. This year James volunteered to make it, so I turned the fryer over to him and he also made a magnificent work of culinary art out of it. It couldn’t have been any better!
Of course we have to thank everybody in the tribe who brought home-made dishes and deserts and also thank everyone who brought store-bought rolls, deserts and other things. This was truly a joint effort by 45 people to make it an amazing and memorable Thanksgiving for all of us! 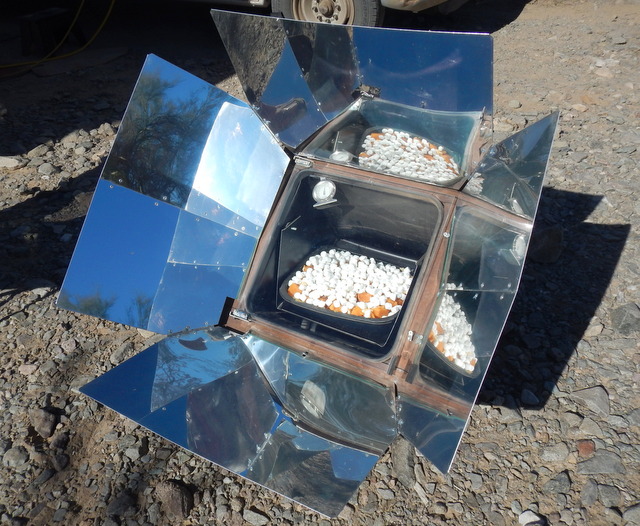 The yams in the solar oven.

The only thing that was missing was you! By that I mean the many “you’s” who are reading this wondering and pondering when and if you should make the leap and try the path less followed. Of course no one can answer that for you, but I believe I can safely speak for the 45 of us and say for us, when we stood at the fork in the road and we chose to follow the less traveled path that has truly made all the difference! Maybe it will for you as well!

I put a GoPro camera on Cody, and he finally started to earn his keep around here: 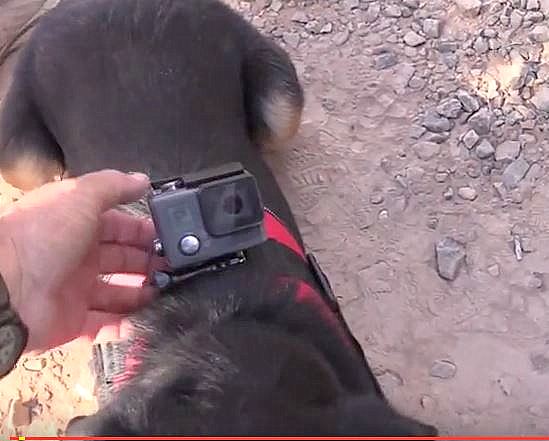 Cody loves to give back! 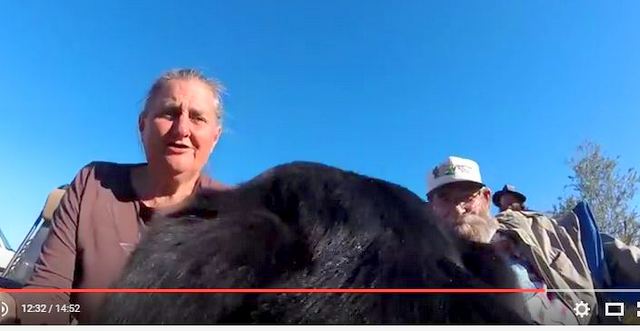 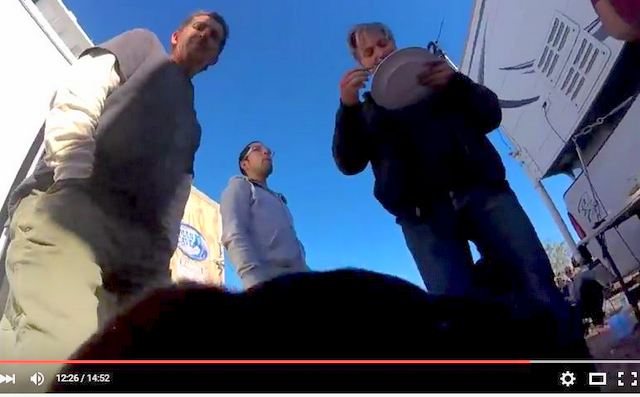 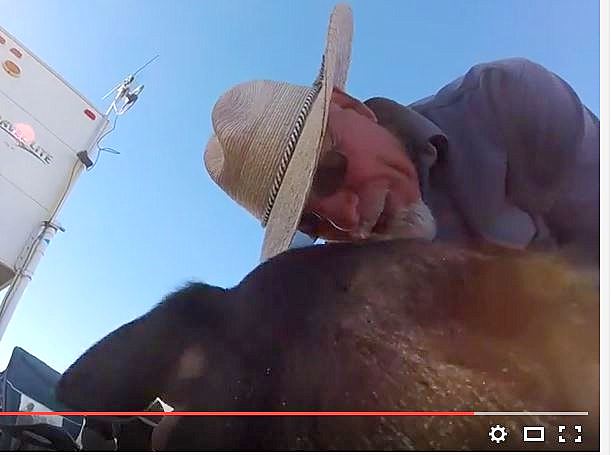 “Thanks for the scratch–but I’d rather have some TURKEY!!!”

Next Join the Tribe at Thanksgiving!